FedEx Reportedly Severs Ties With NRA, Swears It's Not Because Of Guns 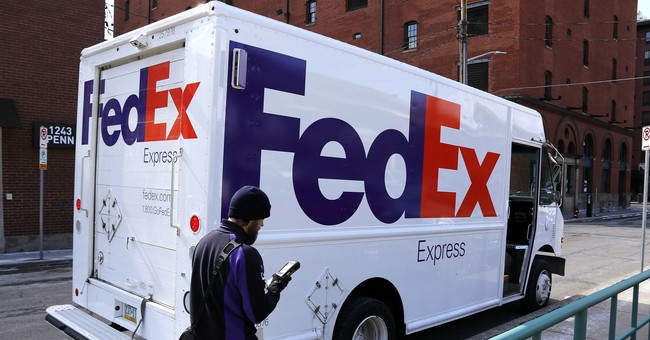 For months, FedEx weathered calls for them to cut their business ties with the National Rifle Association. Ever since Parkland, anti-gunners have been pushing companies like FedEx to cut off the NRA, hoping to choke the company off as part of their effort to stigmatize gun ownership in this country. Many capitulated without much resistance. In fact, many jumped like they’d been waiting for the opportunity to abandon the NRA in its hour of need.

But not FedEx. They stuck around, which was probably a good move. A lot of the companies that did jump ship also found customers less than pleased.

However, the NRA/FedEx relationship wasn’t going to last forever. The shipping company has now cut ties with the nation’s oldest civil rights organization, though company officials swear it has nothing to do with politics.

FedEx has cut ties with the National Rifle Association (NRA), eight months after it first received calls to do so.

The shipping company confirmed to Reuters on Tuesday that it is ending its partnership, which offered discounts to members of the gun rights group.

In addition to the NRA, FedEx is moving more than 100 other organizations that receive discounts to different pricing programs, the company said, according to the Memphis Business Journal.

The move comes days after 11 people were killed in a shooting at a Pittsburgh synagogue. FedEx, however, told Reuters that its decision to end the discount program was unrelated to the shooting, citing business reasons for the move.

Honestly, I’m willing to believe it, if for no other reason that 100 other organizations are being cut off as well.

According to the Memphis Business Journal, the move had more to do with volume than politics.

FedEx conducts periodic reviews of its pricing programs and makes adjustments when needed, the company said Tuesday, Oct. 30. The 100 organizations that were part of the Marketing Alliance did not have the shipping volumes needed to sustain a dedicated program, but account holders or customers of those organizations will continue to receive discounts individually, FedEx said.

Among the groups was the National Rifle Association (NRA), which will no longer be associated with any FedEx marketing programs, the company said.

When asked about the new change in pricing, FedEx said the decision came down to volume. The company provided the following statement:

“We are transitioning some account holders in more than 100 organizations in the FedEx Marketing Alliance program to other pricing programs. Account holders that participated in the program will continue to receive the same discounts on FedEx shipping, and we will work directly with these customers to ensure a seamless transition.”

Now, this truth hasn’t stopped the usual suspects from cheering the move, counting it as some great victory, but they’re pretty good at deluding themselves. This would be another prime example.

FedEx isn’t saying they won’t happily do business with the NRA. They just discontinued a program that the NRA was a member of.

If this is the best victory gun control can muster right about now, then they are well and truly doomed.

As for me, this doesn’t change anything. It’s press the NRA would prefer not to have, I’m sure, even if it doesn’t mean what some anti-gunners think it means. It also indicates higher shipping costs for the company, which they don’t need right about now.

Frankly, if I stop using FedEx at all, it’ll be because every box I get from them is jacked up…if it arrives at all. It won’t be for something like this. Not under these circumstances.