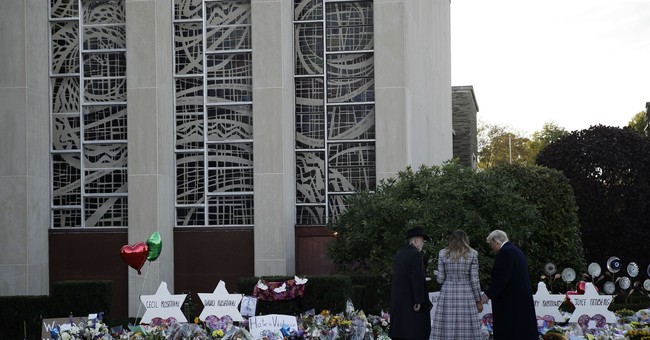 I get it. After a horrific mass shooting, people want to “do something.” For community leaders in Pittsburgh, the pressure is on them to “do something,” even if the pressure all comes from within. As I said, I get it, especially when you consider that Pittsburgh city officials seem to lean somewhat toward the anti-gun side anyway.

With that in mind, you know there’s only one acceptable “something” in their minds, and that’s gun control.

Too bad for them that their state legislature doesn’t have a history of going along with that.

City Councilman Corey O’Connor said now is the time for Pittsburgh to take bold action on gun control, even if it means confronting lawsuits and the ire of a Republican-controlled state Legislature and powerful gun rights groups like the National Rifle Association.

“We will fight this. Pittsburgh will take a stand,” O’Connor said, holding back tears at a Council meeting three days after a heavily armed man killed 11 people at the Tree of Life synagogue.

The NRA has unsuccessfully sued Pittsburgh twice already over a 2008 ordinance that requires gun owners to tell authorities when they realize their guns are lost or stolen. Republican state lawmakers have also tried twice to make Pittsburgh and other cities easier to sue over local laws that infringe on gun access and ownership.

The Statehouse has long been hostile to stricter firearms legislation, making a notable break earlier this fall by passing a law to force quicker surrender of firearms owned by convicted domestic abusers or subjects of protection-from-abuse orders (PFAs). More than a dozen other gun control measures stalled in the current legislative session, including two proposed bans on assault weapons that languished in committee.

“I don’t give a s**t about that either,” Councilman Anthony Coghill said about potential court challenges. “Sue us. They’ll sue us, we’ll sue them back. We don’t want to be liable for big money here, but stand for your principles.”

Now, let me get this straight. There’s a law that Coghill doesn’t like. It says he can’t do something he wants to do, so he’s going to do it anyway?

But I thought laws actually stop people from doing things. You know, like…say…a law that says certain people can’t have certain kinds of firearms. We’re constantly told that we need more gun laws to stop bad people from getting guns.

Yet Coghill here has shown precisely why those laws don’t work.

Laws only work to dissuade people from breaking them if people are both concerned about getting caught and fearful of the repercussions. In this case, Coghill knows he’ll be “caught” violating Pennsylvania’s preemption law, but he has no fear of the consequences. So, he’s fine with breaking the law and proceeding anyway.

How is that any different than the criminals who decide they want a gun regardless of what the law says? The only difference is in the degree to which they’re ignoring the law based on their whims.

The fact is, state preemption laws have a valid reason for existing, and it’s one that makes sense if you consider it.

If each locality has its own laws, its own regulations, it creates a patchwork of rules that make it extremely difficult for any one person to navigate without significant difficulty. By placing the power to create those laws in the hands of one body, you take away the chance of someone accidentally breaking the law because they crossed the county line somewhere.

But Coghill doesn’t care about that. He’s too busy showing us exactly why gun control is a losing proposition.

So, thanks for that, I suppose.