Despite Constant Left-Wing Violence, The Right Is 'Real' Threat 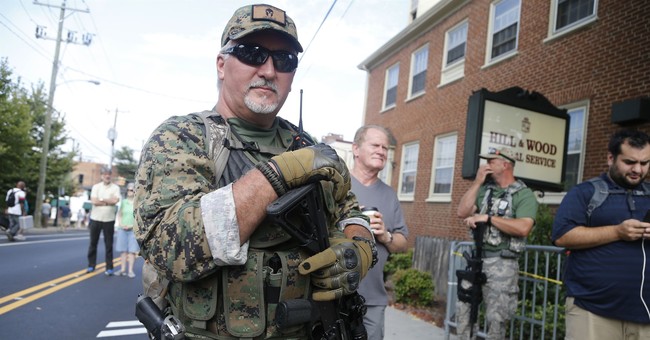 For better or worse, we’re in what some have termed a cold civil war. For the last several years, we’ve seen riots aplenty. We’ve seen opponents of President Trump assault their opposition. They’ve thrown Molotov cocktails and bottles with M80s inside, all designed to hurt or kill their opponents.

Violence has been bubbling up for some time.

While there have been examples of people from what is termed as this side of the aisle being violent, the “bomber” of recent memory and the driver of the car in Charlottesville who killed a protestor, these acts have been dwarfed by the countless acts of violence perpetrated by Leftists.

None of that matters, according to one “expert.”

I spoke to Daryl Johnson, the former Department of Homeland Security analyst who created a big stir when he authored a leaked report in 2009 warning of a rise in right-wing extremist activity. Conservatives reacted with outrage, and the Obama administration decided it needed to do damage control. But Johnson was onto something, and he has since launched a consulting company that studies domestic extremism and advises law enforcement about it.

An edited and condensed version of our conversation follows.

Q: Your 2009 report talked about the rise in right-wing extremism as a reaction to Barack Obama’s election and the financial crash. What are the ingredients now?

A: We’ve had almost eight years of far right groups recruiting, radicalizing, and growing in strength. Typically during Republican administrations we see a decrease in activity. But under this administration they continue to operate at a heightened level. One reason why is the rhetoric coming from Donald Trump.

Building a border wall, deporting immigrants, a travel ban on Muslim countries – these are themes discussed on white nationalist message boards and websites for years, now being endorsed and talked about at the highest levels of the government. He’s retweeted messages about Muslims from conspiracy sites. What keeps these groups energized and active is the fact that the administration has mainstreamed their message and tried to put it forth as policy.

Q: Why do these groups usually go into decline during other Republican administrations?

A: Militias and anti-government groups get energized under a Democrat because of fear of gun control; the hate groups get active because of liberal Democratic policies extending rights to immigrants, gays, and minorities. During Republican administrations the fear and paranoia get dialed back because they feel the administrations are not going to repeal gun rights or extend rights to minority groups.

Q: This is different.

A: Yup. Because of the viciousness of the rhetoric painting Democrats as evil and corrupt. And the different themes that resonate with extremists.

You’ll note a profound lack of anyone even mentioning the near constant violence from Leftists in this.

So why are we really the threat? Why are they saying we are so radicalized?

It’s simple. We didn’t want to give up our guns and we still don’t. We recognize that taking away our gun rights means there is no way to defend any of the rest of our rights, so we refuse to budge and are willing to fight to keep them. Literally.

Here’s the difference that’s being missed, though.

Yes, many on the Right have created groups designed to fight any attempts at gun confiscation and are willing to fight over other potential provocations too, but they were remarkably quiet during the Obama administration. They didn’t like him, and they didn’t trust him, but they trusted the process to keep him more or less in check.

They didn’t destroy private property every few months. They didn’t assault people with things like bike locks over political disagreements. They didn’t do any of that. They just quietly prepared in case they needed to act.

Now, we can talk about how well they prepared some other time, but we all know that’s what they did.

Yet somehow, the Right is still the dangerous ones? Really?

Look, if you follow history, you’ll see that the Left has always been more violent than the Right. The Left sees its opponents as less than human, thus willing to hurt or kill to advance its agenda. It’ll even use the guns it decries to help advance its cause.

But if you or I want to hold onto our guns, we’re right-wing extremists.