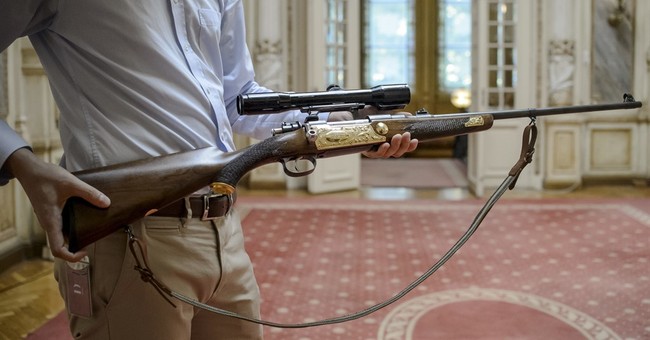 For a gun rights advocate, there may not be a phrase that’s more annoying than one that starts with, “I’m a hunter, but…”

These are people who will support the gun control agenda, at least as it currently stands, and ignore anyone who points out that the gun control crowd’s M.O. means they’ll be coming for hunting rifles eventually. They figure since the current debate leaves their guns alone, the rest of the firearm-owning community can go pound sand.

Now, Vice is giving them a platform as a way to try and counter the National Rifle Association.

Jim Low grew up in Jefferson City, Missouri, a town that still boasts fewer than 50,000 residents. There, he spent his boyhood trampling through a deep, unkempt forest with his brother, training his BB gun on anything that moved.

“There was something that spoke to us, drew us down into those creek bottoms and had us chasing squirrels and rabbits,” he told me. “As adults, [hunting is] something that feels very right, and we think it’s rooted deep within us.”

Now that he’s retired from 24 years at Missouri’s Department of Conservation, and free to express his opinion, Low is adding his name to a very short list of American hunters: those advocating publicly for gun reform. Amid a spasmodic debate over gun violence in America, hunters have often been conspicuously absent. That’s because they face a real price—in terms of lost community, and possibly even lost jobs—for speaking out.

“We are Republican, Democratic and independent,” began an open letter Low signed with 11 other hunters in early May. “We are Americans; we are gun owners; we are hunters; and we support responsible firearm regulation.”

The letter offered a list of reforms, from higher gun-purchasing age rules and mandatory background checks to the prohibition of “new sales of semiautomatic shotguns or rifles (except .22-caliber rim fire) that can hold more than 10 rounds.” Hunters don’t need AR-15s or assault-style weapons to hunt, it argued, and the hunting community shouldn’t be used as a “shield” by those keen to shut down the debate.

But hunters represent a mere fraction of gun owners. Less than five percent of Americans hunted in 2016, by the federal government’s official tally—compared to roughly 30 percent who owned guns. Gun owners were almost twice as likely to say they owned guns for protection rather than hunting, and while the NRA might be the best-known organization that represents hunters—roughly half of its members were estimated to hunt—only 19 percent of gun owners belonged to the NRA, according to a Pew Research Center 2017 survey.

But gun owners are divided—especially on gun control. The Pew survey found that those who didn’t belong to the NRA and those who identified as Democrats were far more likely to favor a number of gun-law reforms, and far more likely to agree with Low. “They certainly don’t speak for me,” he said of the NRA, “and I don’t like the assumption that because I’m a hunter I’m against any kind of gun control and against even talking about gun control.”

“I have heard for decades that hunters all have to stand together or we’ll hang separately,” he added, “and I don’t buy that.”

Whether you buy it or not is irrelevant. It’s the truth.

The reality is that Fudds like these are a problem, in part because of their oblivious nature.

First, who gives a damn if no one needs an AR-15 to hunt? The Second Amendment is strangely mum on the issue of hunting, making it clear that our right to keep and bear arms is a matter of national defense, not about putting food on the table. The AR-15 isn’t bad for defending yourself, your home, or your nation with and that’s really what the Second is about.

Second, you’re an idiot if you think things will stop with a ban on semi-automatic weapons (which isn’t going to happen anyway, even if the Blue Wave is bigger than even Nancy Pelosi believes). It’ll start there, sure.

But tomorrow, your hunting bolt-action rifles will be termed as “sniper rifles” and maybe even “weapons of war.” There will be a push to ban those after some idiot uses one to do something like the Beltway Sniper incident. The airwaves will be filled with talking heads going on about how these weapons are just too powerful for civilian hands.

And you’ll be there, wondering just how in the hell it happened, and the rest of us will point out how you did this. You let it get to this.

For a century, gun owners compromised with gun control advocates. We gave up ground to appear reasonable. What did the gun control crowd ever give up? What did they ever offer to show that they were reasonable?

So we stopped giving up ground. We held firm because it was clear that it was never going to be enough for them until we were all disarmed.

But the Fudds aren’t capable of grasping that reality, and this is all the proof you need of that fact.