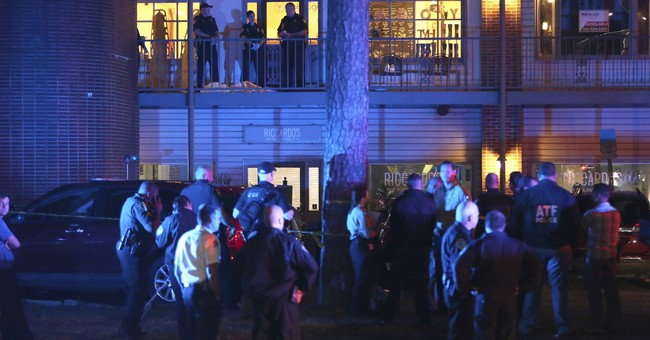 Time and again, we tell people that the best defense against a mass shooting is an armed citizen with the will to act.

But it’s also important to note that even if someone isn’t carrying a firearm,  resisting an attacker may well save a whole lot of lives.

A yoga practitioner says he fought the gunman who killed two people during a class at a yoga studio in Florida.

Quick said he grabbed [the killer]’s gun after it jammed and hit him. But [he] got control of the gun again and pistol-whipped Quick.

Quick said he then grabbed a broom and struck [the killer], which gave some people in the studio time to flee.

Now, a broom isn’t exactly anyone’s first choice of weapon in a situation like that. No one wants to have just a thin piece of wood to go against someone armed with a firearm, but guess what? Sometimes, that’s all you have.

Resisting an attacker is always better than waiting docilely to be slaughtered like livestock. This isn’t rocket science.

I get that there are a lot of people who will say that recommending people resist is irresponsible, that people who fight back make themselves a target, but that’s a load of crap. If they’re in a place where there’s a shooter going around gunning people down, they’re already a target. You can hide if you want to, but that’s not a guaranteed way to say alive either.

But if you resist, you can throw the killer off his game. He now has to focus on you, buying people precious time to escape during the confrontation.

That said, Quick is lucky to be alive at the moment. He’s fortunate the killer didn’t end his life after the struggle was over. Hell, he’s lucky he didn’t die from the pistol-whipping he took at the killer’s hands. He was a lucky guy.

Yet if what he says is true, he’s also a hero. He saved people’s lives by making himself a target.

You can’t demand that of someone, but you respect it when you see it. That’s sure what it seems like we’re looking at now.

Now, I’m not going to recommend people throw themselves at mass shooters indiscriminately. Yes, it may work, but there are smarter ways to do it. Get training on what to do should you find yourself in that unfortunate situation. Learn how to resist in the most effective manner possible. Do what you can to maximize your chances of survival and in allowing others to survive.

If you don’t have that training, you can still do good, but why wouldn’t you learn how to do it far better? I know I sure as hell would.