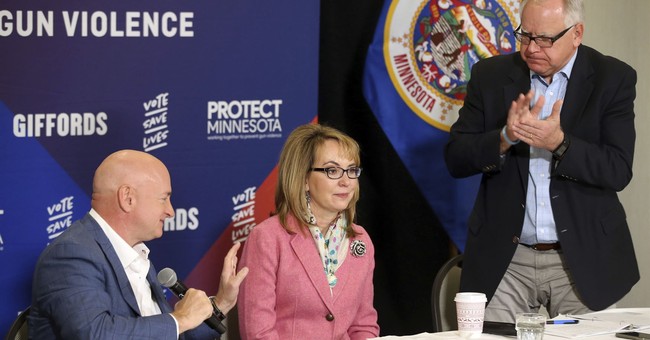 Tuesday’s midterm elections made one thing pretty clear. Despite history favoring a midterm shake-up and the supposed unpopularity of President Donald Trump, the gains they made were pretty modest at best. It was like policies such as gun control didn’t resonate with the American people like they thought it would.

That doesn’t stop gun grabbers from pretending Tuesday night was a huge win for them.

Gun control advocates are claiming victory in the midterm elections, saying the issue helped tip the balance in a number of races across the country.

“The big story of the night was that gun safety won,” said Brynne Craig, the political director for Everytown for Gun Safety, the group co-founded by former New York City Mayor Michael Bloomberg.

Former Rep. Gabrielle Giffords, one of the most prominent gun control advocates in the country, said that for the first time ever, candidates aggressively ran on “gun safety” platforms and won.

“We’re committed to bringing the same fight that we brought to the 2018 midterms to the new Congress,” said Ms. Giffords, who was gravely wounded by a deranged gunman in 2011. “Change is on the horizon.”

Well, some did. But they won in supposedly purple districts and often against bad candidates on the other side. Additionally, a case can be made that they won despite their support for gun control, rather than because of it.

Further, many of the standard bearers didn’t win squat.

Beto O’Rourke lost despite spending more money on his campaign than any other Senate candidate in history. Despite huge amounts of cash flowing in from all over the country, O’Rourke did little more than give Cruz a bit of a scare.

Andrew Gillum lost in Florida despite being anointed as a potential successor to Barack Obama. He was unable to take the wake of Parkland and ride it to the governor’s mansion despite feelings on gun control being sky high.

In other words, gun control wasn’t nearly as winning a strategy as Giffords wants to spin it out to be.

Yet let’s also remember that despite polling showing widespread support for gun control and massive spending by gun control groups, none of these candidates were able to win.

The deck was stacked in their favor, and they still lost.

No matter how they try to spin it, they lost and lost hard.

But, in fairness, it’s been so long since they won, they probably forgot what it looked like.

DC's Treating "Gun Violence" As A Public Health Problem, And It's Only Getting Worse

CNN Forced to Fact Check Joe Biden's CNN Town Hall
Townhall
If you thought Jen Psaki was pissed with Peter Doocy before, just wait'll you watch him use Joe Biden's border remarks to twist her into a pretzel [video]
Twitchy
Joe Rogan Has One Big Move Left After CNN Doubles Down on Trashing Him
Redstate
UC Berkeley Students Happily Pledge Money to Help the Taliban Kill Americans Inside the U.S.
PJ Media