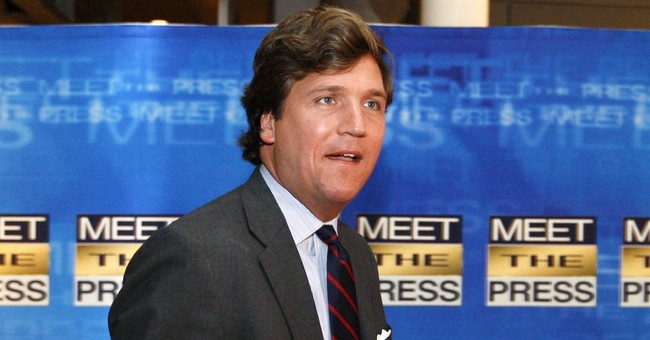 Many in the media called them “protestors.” I can’t call them anything other than a mob.

I’m referring to the swarm of thugs who surrounded Fox News host Tucker Carlson’s home Wednesday night while Carlson was preparing to go on air. Not only did they surround the place, but they also caused property damage in the course of their “protest.”

Last night, Beth told you about a developing story involving members of an Alt-Left group gathering outside the private home of Fox News host Tucker Carlson.  The goons demanded that Carlson “leave town,” telling him, “you are not safe,” and “we know where you sleep at night.”  As if to reinforce Carlson’s worldview, they also chanted, “no borders, no walls — no USA at all!”  As it turns out, these Antifa-linked thugs showed up when their target wasn’t even home; he was at Fox preparing that evening’s show.  But Carlson’s wife was at the house, and she was terrified:

Fox News host Tucker Carlson was at his desk Wednesday evening, less than two hours before his 8 p.m. live show, when he suddenly started receiving multiple text messages. There was some sort of commotion happening outside his home in Northwest D.C. “I called my wife,” Carlson told The Washington Post in a phone interview. “She had been in the kitchen alone getting ready to go to dinner and she heard pounding on the front door and screaming. … Someone started throwing himself against the front door and actually cracked the front door.” His wife, thinking it was a home invasion, locked herself in the pantry and called 911, Carlson said. The couple have four children, but none were home at the time. But it wasn’t a home invasion. It was a protest.

I’m not sure any of what is described above can be accurately characterized as a “protest” in the American political tradition. It was intimidation, pure and simple.  It was a mob — and yes, that word applies.  It was described as such by the perpetrators, approximately 20 of whom arrived to instill fear through physical intimidation. “It wasn’t a protest. It was a threat,” Carlson told the Washington Post. “They weren’t protesting anything specific that I had said. They weren’t asking me to change anything. They weren’t protesting a policy or advocating for legislation. … They were threatening me and my family and telling me to leave my own neighborhood in the city that I grew up in.”  They didn’t just chant and issue menacing messages through a bullhorn.  They damaged the front door to the family house, and more:

Seriously, read the whole thing if you aren’t familiar with what happened.

Look, in a lot of places, someone trying to bust through the door is sufficient grounds to start shooting. It was more than enough of a justification for Carlson’s wife to find a place to hide and lock herself in, away from the crazies.

But this is also emblematic of a deeper problem developing in this country, and that’s the idea of attacking those with whom you disagree.

Carlson’s an old hand at this profession. He knows damn well anything he says may be attacked in words, but not with stuff like this. I have no doubt Carlson is fine with op-eds denouncing things he says in any newspaper in the world. I’m sure he’s ready for his left-leaning counterparts at other networks to take issue with his comments as well. At least, up to a point.

But that’s not what happened.

In the process, though, it’s a reminder. It’s a reminder that it’s not just rhetoric we’re dealing with anymore. What started out as people yelling at politicians they disagree with while they try to eat continues to escalate into things like this. The only saving grace for most of us is that these people don’t know who we are.

For now, at least.

As things start heating up, all I can do is warn you to make sure you have enough ammo and that your weapons are zeroed.

You know, just in case.

The Case Against Everyone Else 2024 – Part 1
Townhall
Kat Tenbarge crafts a colossal self-own in an attempt to smear conservatives
Twitchy
Heiress 'Brainwashed' by Woke Women's College, Mom Paid $300 a Day to Get Her 'Deprogrammed'
Redstate
Election Denier Refuses to Give Up House Leadership Position
PJ Media