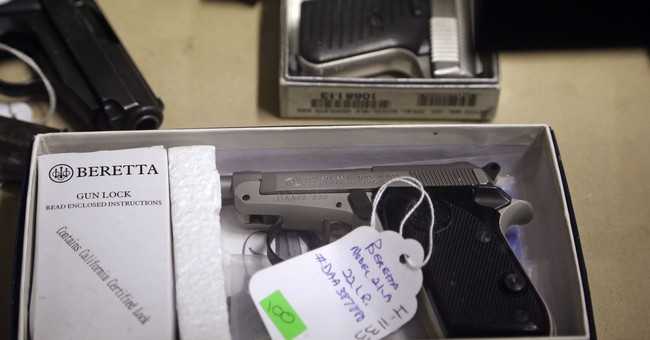 Recently, an Ohio gun control group pushing for an anti-gun ballot initiative got its petition slapped down. Unfortunately, we all know how this sort of thing goes. The petition gets turned down, so the group reworks things until it can resubmit the initiative. There are rules that have to be followed, and once those are adhered to, the push begins again.

And indeed, that push has started.

Supporters of a measure that would expand background checks on gun sales submitted a new version to the attorney general Tuesday after he rejected the first submission.

Ohioans for Gun Safety, a grassroots group, gave the office of Attorney General Dave Yost an updated version of its petition that would effectively require that a background check occur in all gun sales.

In June, Yost rejected the first submission from the group, saying the summary accompanying the proposal did not accurately reflect what the proposal would do.

Because the proposal is an initiated statute, the petitioners will need about 135,000 valid signatures of registered Ohio voters to send the proposal to the General Assembly if the attorney general approves the language. Once there, it will likely sit without being acted on for the required four month window since Republicans control the legislature and have recently pushed for ardently pro-gun rights legislation.

In other words, the legislature didn’t do what they want, so they’re going to try and bypass it.

Of course, based on what I see out of Ohio, Ohioans for Gun Safety isn’t likely to find any joy in this method. Ohioans don’t seem to be particularly interested in gun control.

Then again, that also assumes it got the wording on the proposal right. That might be a bold assumption to make.

Assuming the group did, Ohioans will have to decide whether they want to submit to a background check for all firearm transfers, something that isn’t shown to reduce crime or do much of anything else. After all, black market sales aren’t going to undergo these checks, and we know that’s where criminals get their guns.

Ohioans for Gun Safety argue that polling shows this measure to be popular, which likely contributed to this effort. After all, if the legislature won’t pass something and you’re convinced that the people want it, of course, you’re going to go around them.

Polling also said Hillary Clinton was going to be the next president of the United States so I wouldn’t put too much faith it.

That doesn’t mean pro-gun groups working in Ohio should rest easy. If this goes on the ballot, it’ll be a dogfight. It’s imperative for the safety of all Ohioans that this measure is defeated and defeated hard so that no one will try this nonsense again. A sort of metaphorical salting of the earth, if you will.

Maybe if this gets squashed in Ohio, we’ll stop seeing the universal background push elsewhere.

I won’t hold my breath on that one, though. At this point, it seems gun control activists are bound and determined to keep pushing their proposals, no matter what.