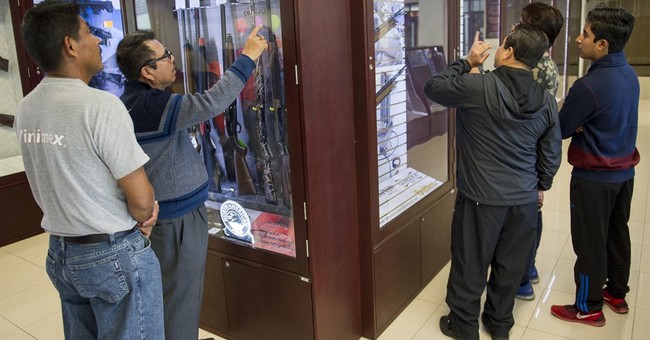 We keep hearing that gun control is the secret to combatting crime. Gun control advocates keep arguing that somehow, gun control will stop criminals from obtaining firearms and create an overall decline in violent crime.

However, let’s look at what happens when somewhere outside of Europe passes strict gun control measures.

In the first six months of 2019, there were 17,608 murders in Mexico. In June alone, there were 3,080 homicides in the heavily gun-controlled nation, according to The Associated Press.

“Mexico has only one gun store and stringent gun controls, neither of which prevented the murders,” Breitbart News Second Amendment columnist AWR Hawkins noted on July 23.

The lone gun store in Mexico is run by the government. CBS News reported that the government store is the only place a firearm can be “legally” purchased.

“All firearms must be registered and the type and number of guns one can own are highly regulated,” Hawkins noted.

The University of Sydney’s GunPolicy.org lists Mexico’s gun control as “restrictive,” noting that the right to possess firearms is only “conditionally guaranteed” by the country’s constitution.

In addition to only having a single gun store and tight regulations on what kind of guns citizens can own, Mexico also keeps a lid on how much ammunition an individual may have. The limit ammo to just 500 rounds of .22 caliber, 1,000 shotgun shells, and 200 rounds for any other firearm they’re allowed to have.

With laws like this, if the gun control crowd is to be believed, Mexico should be a nation at peace with itself, with no violence to speak of.

Instead, it’s a country bordering on failed state status with thousands of murders per month. It’s currently on pace to have somewhere around twice the homicide rate of the United States with less than 40 percent of our population.

No doubt, some anti-gunner will claim that Mexican guns come from the United States, but that’s based on studies that traced a handful of guns to the U.S., but the media failed to report that the majority of guns couldn’t be traced at all. There’s little reason to believe all these guns are coming from the United States.

Besides, where are the drugs coming from?

Mexico, like most other nations, have anti-drug laws as well. Yet the cartels are obtaining cocaine from South America which they then funnel into the U.S. They grow pot, apparently, but many other drugs are obtained from outside the nation. Even if the U.S. somehow put a stamp down on guns going south, there’s no reason to believe that they would suddenly find themselves bereft of a firearm source.

Especially since smuggling guns across international lines is illegal too.

Look, the fact of the matter is that Mexico has tight gun control, but the only people it’s applying to are the law-abiding Mexicans who are unable to actually fight back against the criminal overlords that have the actual control over so much of the country. The criminal factions are ignoring the law, as is their way, and will continue to do so. Meanwhile, the victims of their efforts will remain the good people of Mexico who are powerless to defend themselves and must continue to live in fear.

And some wonder why Second Amendment supporters are willing to die before giving up our guns.

Despite laws against guns and drugs, San Diego cops find both
Dec 07, 2022

Just How Stupid Are Sen. Thom Tillis and the Rest of the Republican Establishment?
Townhall
Radio host explains why it's OK to go after Sen. Ted Cruz and his teen daughter after she was rushed to hospital
Twitchy
We Found the Real Dog-Faced Pony Soldier (and I Wish We Hadn't)
Redstate
FACEPALM: Karine Jean-Pierre Reads Wrong Answer During Press Briefing
PJ Media