Whether She Meant To Or Not, GQ Writer Proves Guns Prevent Violence

Ever since it became clear that Donald Trump had a shot at the White House, we’ve seen violence pop up all over the place. Riots abounded, and not just over Trump. Students a Berkeley famously rioted when Milo Yiannapolis was scheduled to speak. Another riot popped up in Berkeley over a free speech rally.

Monday, thousands of gun rights activists showed up in Richmond, Virginia. Many of them armed and lawfully carrying firearms.

There was no violence.

Yet over at GQ, writer Talia Lavin argued that to call the protest peaceful was a misnomer. She argued that it was anything but peaceful.

However, she also inadvertently argued that guns actually prevent violence, too.

On Monday, itself the sea of armed men kept the city in a kind of artificial stillness—not safety but fear. There is a difference between peace that consists of calm and security, and the false peace of being held under threat. One may be silent when held at gunpoint, but it is not the silence of contentment; it is the silence of mortal terror.

Reporter friends who planned to attend the event went in with a sense of dread, a war-zone fatalism at what might happen. Molly Conger, a Virginia-based leftist activist and citizen journalist, told me that she had cautioned other activists to stay far from the capital and avoid counterprotest. She attended, she told me, because she felt an obligation to document the event, rather than to protest it. “I still think it was the right thing to do,” she told me Tuesday, of her decision to warn other activists away. “I would be distraught if I had the power to keep people away and didn’t and they died in a mass shooting.” At the event, she said, “the crowd was so thick I got knocked in the face and chest with rifle barrels.”

In other words, the left-leaning counterprotesters that usually start the violence didn’t show up to start any violence because their preferred targets had weapons.

Lavin goes to great pains to point out all the people who were actually afraid, and I’m going to go on record as saying that’s a damn shame. No one should be afraid of law-abiding people exercising their constitutional rights. No one at all.

They show up with the intent to intimidate their opponents into silence.

No, people shouldn’t feel scared to speak, but in this case, that’s on Lavin and her buddies in the mainstream media, not on the protesters in Richmond. No one who went to Richmond cared anything about silencing the opposition. They went to make their voices heard. In fact, they shouted down anyone who espoused violent rhetoric.

Lavin decries the fear that these people felt, fear that she and her fellow mainstream media commentators instilled in these people, and then somehow pretends that our brothers and sisters are somehow responsible for that fear.

Well, maybe we were, but not in the way Lavin describes.

There was no violence. If the prevalence of guns made violence more likely, the sheer number of firearms openly carried in Richmond should have made violence inevitable. Yet there wasn’t any.

That’s because, as noted before, the counterprotesters who typically start the violence weren’t there. They weren’t there because they knew they wouldn’t find easy prey. They knew there was finally a group that wouldn’t be intimidated by baseball bats and other clubs.

Lavin acknowledges that it was fear of being shot that kept them away. She won’t acknowledge that that was why there wasn’t any violence, of course, but what do you expect from a writer for GQ? 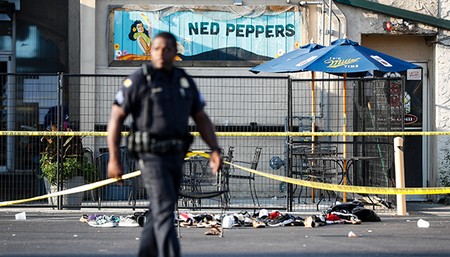