Pointing Out Bias Against Guns Isn't "Dragging" Anyone

There are a lot of people who don’t like guns. Most don’t have a direct reason. They just see what’s reported on the news, hear the opinions, and decide that firearms are just too dangerous and we need more restrictions on them.

Some, however, have more personal reasons. They may have lost someone who was shot or they might have survived a mass shooting. These people are biased against gun rights for a definite and clear reason.

When one of these people makes a claim about firearms or the Second Amendment, if you understand their bias, you know to watch for the difference between facts and opinion.

Yet apparently, when bias shows up in something written by a well-respected attorney, noting that is “dragging” the man. At least, that’s the takeaway from Above The Law’s Joe Patrice, who is taking issue with law professor Josh Blackman’s pointed criticism of a new brief filed in support of New York’s “may issue” concealed carry laws by a number of conservative jurists.

Judge J. Michael Luttig was one of the most conservative voices on the federal judiciary. His jurisprudence was rated “consistently conservative” by an early 2000s study conducted by political scientists, placing him somewhere between Attila the Hun and J. Harvie Wilkinson III. In fact, when John Roberts was ultimately appointed to the Supreme Court, conservatives were none too happy that Bush had overlooked the more reliably conservative Luttig.

Which is all to say that when Luttig, who left the judiciary in 2006, weighs in on a legal issue, he’s not coming at it as a firebrand liberal. He puts on his Chick-fil-A bib with two hands just like the rest of them.

Say what you will about interpreting the Constitution by channeling the ancients, at least it’s an ethos. For anyone who claims to adhere to an originalist judicial philosophy, this brief shouldn’t be controversial and — given the history clinic the authors put on — should force some frank concessions from conservatives over the meaning of the Second Amendment.

Just kidding, they’re just going to drag the amici for their parents getting killed by gun violence!

Marcia Coyle of the National Law Journal wrote of the brief, “also on the brief is former Judge J. Michael Luttig of the U.S. Court of Appeals for the Fourth Circuit. Gun violence touched his family in 1994 when his father, John Luttig, was fatally shot in a carjacking.”

In response, Josh Blackman took to the Volokh Conspiracy to write:

The implication here is that their legal views on the Second Amendment were affected by their personal experiences. On balance, I think this interview reduces the effectiveness of the brief.

Before we get any further, let’s dispense with the inevitable weak sauce response: “well, Joe, this isn’t really ‘dragging’ Judge Luttig because of his father’s killing.” Yes it is. The post says the Luttig’s legal analysis is now suspect because of what happened to his father. How is that anything but an attack on him as a lawyer based on his personal life? An aspersion that his lived experience makes him bad at evaluating the law?

Now, I’m not an attorney, but as a layman, I think it’s relevant to point out that Luttig has some degree of bias. Yes, he may be making legal arguments and presenting legal evidence supporting it, but it also suggests the potential for having succumbed to confirmation bias. Did he write the brief after examining all the evidence, or is it possible he simply sought out evidence that supported his view?

It’s a fair question that should be asked of anyone.

Let’s say, hypothetically, that I was an attorney who also wrote here at Bearing Arms. If I wrote a legal brief, wouldn’t my bias make my arguments at least worthy of closer examination?

After all, the author, Joe Patrice has his own biases. He’s clearly not a fan of the current interpretation of the Second Amendment by the Courts, as is evidenced by some of his writing, so no wonder he thinks pointing out someone else’s potential bias is dragging.

Trust me, I’ve done plenty of dragging and been dragged a few times, and pointing out the possibility that a tragedy in someone’s past may have shaped their views is anything but.

What Patrice is essentially arguing is that Luttig is somehow special, that he shouldn’t be subjected to scrutiny about how his history may have shaped his current thinking. No one gets that treatment, nor should they. If you put something out into the world for it to consume, people have a right to examine it and ponder.

If Luttig’s legal arguments are sound, questions about bias won’t matter. No one is saying he lied, only that it may have subconsciously have adjusted the direction of his beliefs.

But Patrice doesn’t care about that. He’s an anti-Second Amendment zealot who cloaks his anti-gun bigotry with legalistic rhetoric, but he doesn’t do a very good job of cloaking it. After all, it’s there for the entire world to see.

No doubt about his bias, that’s for sure. I guess Joe would say I’m dragging him now, huh? 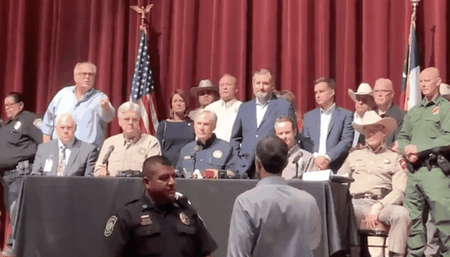 Leftists Are About to Kill Millions of People Right Before Our Eyes
Townhall
PolitiFact: No, Stacey Abrams didn't support pulling the MLB All-Star game out of Atlanta
Twitchy
Barack Obama With the Worst Take of All Time on Uvalde
Redstate
Mass Shooting Facts to Shut Down Your Liberal Sister and Her Annoying, Man-Bunned, Non-Binary 'Boy' Friend at Your Memorial Day BBQ
PJ Media