Gun control can't be supported with misremembered past

Whether we like it or not, there will always be people who want gun control. To them, rights aren’t really rights. They’re suggestions of things we should probably be allowed to do most of the time, but only within certain parameters. They don’t value free speech, freedom of the press, or freedom of religion, either.

Yet gun control is a bit different, often because people don’t even make a pretense about supporting the right to keep and bear arms.

What’s worse is how many people will either misremember or flat-out lie about the past in order to justify a gun-controlled future.

For example, this op-ed.

The author is actually taking a shot at Hollywood, calling for them to experience gun control–something I can see an argument for, to be honest, though not for the reasons he claims–yet he treads down a path I’ve seen all too often in more broad attempts to justify gun control.

Now, since the author is taking a shot at violence in entertainment–something I’ll address in a bit–I have to assume he’s serious about those comments in the second paragraph.

If so, well, he’s not remembering history very well.

I don’t know how old the writer is, of course, so it’s possible that he may be much older than I am. He’d have to be because none of that stuff has been remotely true at any point in my now 49 years on this planet.

As bad as 2020 was with violence–and it was pretty bad, as we all remember–it wasn’t even close to historic highs. For example, the homicide rate of 6.52 wasn’t even as bad as the 2001 spike of 6.69. Granted, at least some of that may have been attributed to 9/11–a singularly bad day, to be sure–but in 1997, the homicide rate dropped to 6.70. That’s right, it was considered good news that it hit that point.

Further, as this graph of data from the Department of Justice shows, there’s been a long history of violent crime in this country: 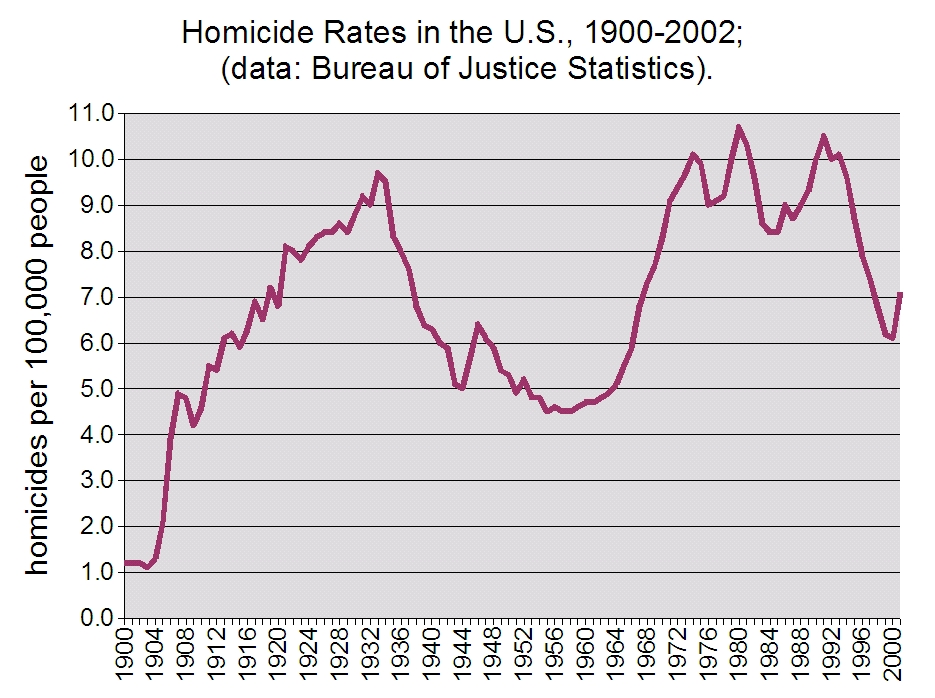 After the end of Prohibition, we saw a significant drop in violent crime, of course, but starting in the 1960s, that began to rise to read epidemic levels throughout the 70s and 80s and into the 1990s before dropping significantly. It never got back to the levels of the 1950s, of course, but it does show that unless someone is drawing social security, violent crime and the murder rate has likely been a major problem throughout their life.

What the author here apparently does–and what many anti-gunners explicitly do–is to pretend the past was some glorious moment, something we should strive to recreate, even though it’s simply not the case.

But I may be ascribing motives to the author he doesn’t share. Maybe he doesn’t believe that misremembered past. However, let’s look at where he went from there, shall we?

I know our legislators are proud of what they’ve done about gun control, but it’s time for them to ask a deeper question, and the question is this: Can a society whose entertainment is saturated with gratuitous violence, bloodshed, murder and mayhem be anything but violent? It’s time to seriously consider the correlation between violence in our entertainment and the violence on our streets.

(According to the national Gun Violence Archive, as of Aug. 30, this year there were a total of 29,408 gun violence deaths, which included 450 mass shootings.

Hundreds of studies have shown that violence in television and film leads to violent behavior. And some 90 percent of TV programs and films contain violence, especially critically acclaimed shows that have pervasive graphic violence. (You’ll find plenty of them on Netflix and Prime Video.)

Except, he cites none of those studies. (Of course, he also cites the Gun Violence Archive as an authoritative source, but doesn’t seem to understand how they inflate the data in question.)

What most of those studies showed was a desensitizing effect, which doesn’t actually lead to violence in and of itself. It simply means the mechanisms that prevent people from becoming violent get dulled. There’s more to violent crime than whether or not someone watched graphic violence as a kid.

Further, depending on the author’s age, he likely grew up in the era of the video game–an era that happens to correspond to the drop in violent crime in the 1990s.

Again, that misremembered past.

Look, if someone thinks Hollywood should make less violent content, that’s fine. But don’t pretend that the history you claim is the history that actually occurred. It’s simply not the case.