"Holy Sh*t. I Survived." Woman Shoots Elusive Stalker Who Tormented Her For Six Months, Then Bares Her Soul Online

Last night, a woman in Las Vegas shot a man breaking into her home. The news account of the incident is very dry:

A man was shot in the chest early Friday morning after trying to break in to a home of a former girlfriend, according to police.

Lt. Eric Lloyd with Las Vegas Metro police said the shooting happened near the area of South Durango Drive and Tropicana Avenue at about 1 a.m.

Citing the woman living at an apartment complex, Lloyd said she called officers regarding a former boyfriend kicking on her door.

Police said the woman fired two shots at the man once he made entry into the unit, hitting him once in the chest.

I Shot My Stalker Tonight

I’m writing this staring at the mess the police left for me, in a bit of a fog. After 6 months of stalking and threats against my life my stalker finally snapped and decided to kick my door in and make good on his promise. Out of fear, the past month I had begun sleeping with a chair propped against my front door, to give myself a few extra precious seconds in case of emergency. I shudder to think how differently things might’ve turned out had I not barricaded the door. I awoke around 115 am to the sound of the door giving way after one kick followed by the sounds of my stalker struggling to dislodge the chair while forcing his way inside. I jumped up and grabbed the gun I’ve learned to do everything even shower with. I stood at the top of my stairs and fired twice. Hitting him in the chest, I hear his scream, his disbelief that I’d stood up for myself.. 0 to 100 in milliseconds. I’ve never been so afraid in my life. I do not know if he is living, but I do know the police have him and that’s what helps the most. For months of him evading the police I began to question whether he was unstoppable. Untraceable. Houdini, he would murder me and get away with it. As of now I’m in a haze of guilt, surprise, relief and disbelief. I shook as the canines drag him out from his hiding place under a bush. I survived, where so many people do not. Holy sh*t, I survived.

Let’s be brutally honest here, America: gun control groups Like Moms Demand Action don’t give a damn about your safety or survival.

They’re far more interested in your death, as long as they can blame it on “gun violence.”

If you’re strangled, stabbed, hacked, or bludgeoned to death, you’re “NaN” to them… not a number,  a statistic that they can’t use. In their dark little hearts, they’re hoping that you’ll be killed with a gun, to be another useful bit of data to spin as they seek to limit the liberties of your fellow Americans.

They won’t talk about this incident, where the bad guy gets shot. They never do. They avoid the hundreds of thousands to millions of defensive gun uses every year like the plague. They don’t want to you to know the reality that this young woman in Las Vegas now knows firsthand. 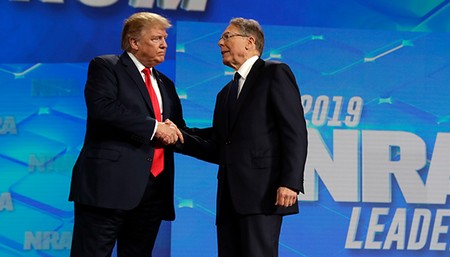