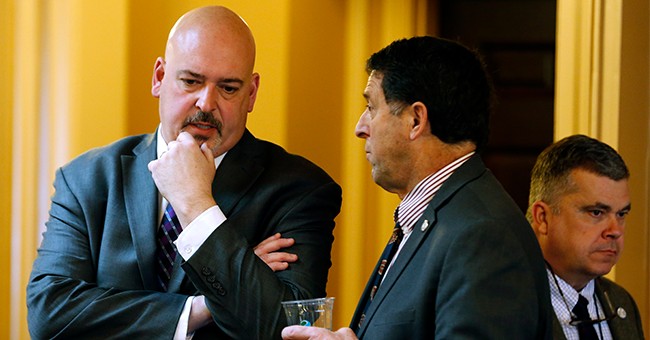 The Virginia Crime Commission has concluded two days of hearings on gun control bills, crime fighting measures, mental health proposals, and more. The commission, which is an offshoot of the Republican-led legislature, was tasked with considering the gun control bills demanded by Governor Ralph Northam after the shootings in Virginia Beach in May of this year. Instead of voting on the bills during the special session Northam called, lawmakers instead decided to have the VCC debate and consider the bills before making recommendations to the full legislature when it re-convenes in November.

In July, when Republicans made the decision, gun control activists and Democrats blasted the move as a stunt to avoid voting on Northam’s gun control package, but after watching hours of the hearings over the past two days, I couldn’t disagree more. What we actually saw this week was real substantive discussion on a number of proposals like “red flag” laws, gun-rationing (“one-gun-a-month” laws), gun and magazine bans, as well as mental health and anti-violence proposals that could be put in place without any new gun control laws in the state. Contrary to the narrative put forth by Democrats, this wasn’t a one-sided discussion, either. Lawmakers heard from researchers, law enforcement officials, and members of the public on both sides of the issue.

Claire Boine, a research scholar at Boston University, recommended enacting universal background checks along with giving law enforcement discretion in deciding whether to grant a concealed carry permit and prohibiting people convicted of violent misdemeanors from purchasing firearms. These three policies together, she said, would reduce gun homicides in Virginia by about one-third.

Boine said a ban on assault weapons would not be effective in significantly reducing gun homicides. They are rarely used to kill people, she said, and most people who acquire them are recreational gun owners.

“It might send the symbol we blame lawful gun owners for most crimes when most people using assault weapons are not responsible for crimes,” Boine said of an assault weapons ban.

It’s nice to see a researcher acknowledge that a ban on semi-automatic firearms won’t reduce homicides, though it’s equally disappointing to hear her tout things like unenforceable universal background checks, discretionary-issuance of concealed carry licenses, and lowering the bar for a lifetime prohibition on firearms ownership to include misdemeanor crimes.

An easier, more constitutional, and more effective way of reducing homicides would be to target those few individuals who are driving violent crime and homicides, rather than casting a wide net over all legal gun owners in hopes of ensnaring the few individuals illegally possessing firearms with violent intent.

One fact that David Kennedy, director of the National Network for Safe Communities and professor at John Jay College of Criminal Justice, wanted to highlight is that there are hundreds of millions of guns in the United States, and few of them are used to kill a human being.

“As bad as homicide and gun violence is in this country and states and cities, it remains statistically an extremely rare event,” Kennedy said.

A small number of highly dangerous people driven by beefs with others are responsible for most of the “awful, grinding everyday gun violence,” Kennedy said.

Kennedy is the architect behind a strategy known as Operation Ceasefire, which has been around for two decades. It’s a strategy police and community leaders use to identify those most at risk of shooting someone or being shot, convey why they need to stop shooting, offer support, and promise swift and tough crackdowns on every member of the next group that puts a body on the ground. Research shows this strategy, when effectively and consistently implemented, can significantly reduce gun violence.

Some cities have seen homicide rates drop by 40% or more when Operation Ceasefire’s been implemented, but so far Democrats have yet to get on board with legislation offered by Del. Todd Gilbert that would provide grant money to cities around Virginia to implement Operation Ceasefire programs.

Gilbert said he has reached out to some Democrats about his idea, but none have expressed an interest in working with him on the legislation.

Del. Charniele Herring, D-Alexandria, said after the meeting that she found Kennedy’s presentation “enlightening.” She added that there were other ideas, like universal background checks and red flag laws, that are also effective.

“There’s no reason we can’t have several pieces of legislation go to the floor of the General Assembly for a vote,” Herring said.

From what I saw in Richmond this week, members of both parties say they want to take action to reduce violent crime and suicides, but Democrats are really only interested in proposals that try to accomplish that goal by reducing legal gun ownership and imposing burdens on legal gun owners. At that point, it becomes less about crime and suicide and more about gun control. Republicans in the state have several effective and proven ideas to bring to voters over the next several months that don’t involve stifling or eroding a constitutionally-protected right. We’ll soon see if voters are ready and willing to listen.