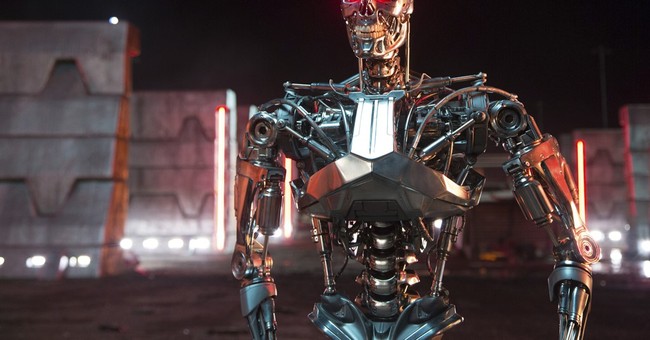 Every time I’m posed with the question, “But why do you neeeeeeeed an AR-15″, I’m tempted to reply, “Because I need something to take on our future robot overlords.” I’m only half-joking, by the way. I can’t watch a video by Boston Dynamics without getting a sinking feeling in my gut that we’re actually engineering the objects of our own demise, so when a video popped up on YouTube over the weekend featuring a gun-toting robot that can stay on target even while taking a hockey stick to the back, I had to stop myself from proclaiming to the world, “See, I told you so!!” before I even watched the clip.

I’m glad I didn’t actually say anything, because the video actually features a clever bit of CGI instead of a real hunk of clanking metal. In fact, if you watch the entire segment, it quickly becomes apparent that either the robot is fake or the guys at “Bosstown Dynamics” are terrifyingly ignorant of proper range safety. Do watch the whole clip, which is pretty amusing and an incredible example of just how realistic CGI can be these days.

Over at Mediaite, Caleb Howe notes that an awful lot of folks did think the video was real, at least at first glance. I don’t blame them, frankly. Not only were the visual effects outstanding, the idea of a robot that can shoot guns doesn’t seem so far-fetched once you’ve seen a robot parkour, open a door, or even nimbly run under its own power. It’s only a matter of time before the robot in the video above isn’t just a creation of visual effects artists, but a real hunk of cold, unthinking, unfeeling, metal that will do the bidding of its master. It’s understandable to me that people would be freaked out by the video. What I find unfathomable is the attitude of Marc Raibert, the head of the robot company Boston Dynamics, who says he is bothered by the fact that a lot of people find his creations existentially terrifying.

The 69-year-old, who founded Boston Dynamics in 1992, says the fearful headlines appear to be more grounded in “science fiction” than in reality.

“It’s hard to find a Hollywood movie that has something like a robot in it that doesn’t go wrong,” he said.

However, unlike semiautonomous cars or airplanes (which he notes are largely auto-piloted), Raibert says the fears seem to be rooted in people ascribing intentionality in the humanoid and animal-like robots. The fear is more that they could go rogue, as opposed to worries about them simply malfunctioning or being misused.

Ehh, I don’t know about that. For me anyway, it’s less about robots going rogue and more about the misuse of technology. We’re already seeing what happens when an authoritarian regime imposes a near-total surveillance state. Now imagine an authoritarian regime that didn’t have to rely on humans with all of their pesky feelings to enforce the law, but could rely on a robot army to crack down on protesters and dissidents. It’s just a little too creepy and plausible for my liking.

In fact, I kind of understand how gun control advocates must feel about semi-automatic rifles, because if I thought that banning robots would make them go away, I’d probably be all on board. Unfortunately for me and gun control advocates alike, banning something doesn’t make it disappear, no matter if we’re talking rifles or robots. You can’t turn back the clock on technology, at least not until a solar flare or EMP sends us back to the 19th century. Semi-automatic firearms are here to stay, and the robots are coming like it or not.