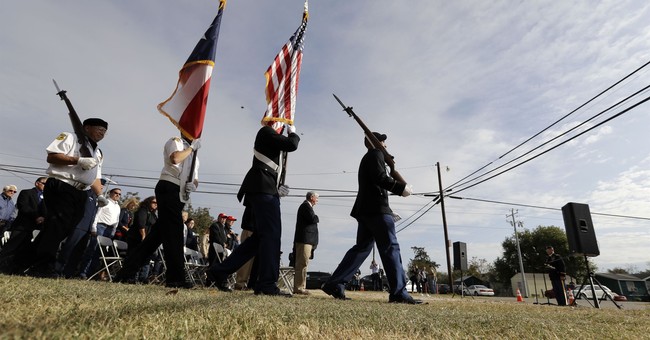 For more than a decade, ROTC cadets at the University of Virginia have held a 24-hour vigil each Veterans Day that concludes with a 21-gun salute to those who’ve served. This year, however, the guns of November will fall silent after the university’s president announced that the tradition is over, in part because of concerns about gun violence.

The Provost’s office, in conjunction with the colonel of UVA’s ROTC program, made the decision. The ceremony marks the conclusion of a 24-hour vigil by ROTC cadets and has included the 21-gun salute for more than a decade.

“One is that it would be disruptive to classes and two, unfortunately with gun violence in the U.S., there was some concern that we would cause a panic if someone heard gunshots on grounds,” said UVA President Jim Ryan.

The fact that ROTC cadets have been honoring veterans with a 21-gun salute for ten years without issue doesn’t seem to matter much to Ryan or other university officials intent on coddling students rather than simply reminding them that the rifle fire they may hear has nothing to do with a violent crime. That doesn’t mean that everyone’s happy with the decision.

Veterans like Jay Levine are upset with the decision. Levine went through the ROTC program at UVA and says the 21-gun salute is the ultimate salute to those who have served and passed away.

“I am very disillusioned, very upset, and very surprised that they would make such a decision,” Levine said.

Levine says he will write an email to UVA about his concerns. He hopes talking in a more public setting will help entice more veterans to take action.

“Freedom isn’t free,” Levine said. “There’s a cost and that cost is born by the veterans and the families of those veterans.”

After pushback from many veterans and alumni, the university president now says they’ll work with the ROTC and revisit the issue for next year’s observance.

That said, while Col. Hough and many members of our ROTC community supported the change this year, community responses have helped us to understand that many see the 21-gun salute as an important element of the Veterans Day ceremony at the University of Virginia. Given that the plans are already in place for this year, we will follow the event organizers’ recommendation to proceed without the 21-gun salute in our Veterans Day Ceremony. Following this year’s ceremony, however, we will work with our ROTC officers and cadets to take a closer look at options for our Veterans Day events, including those that would enable us to re-introduce the 21-gun salute to the program.

Why do I have a feeling next year’s event will feature a 21-squirt gun salute to our veterans? Or perhaps the university can equip their ROTC cadets with marshmallow guns instead? Not only could the cadets honor those who’ve served this nation, but they could make a symbolic point about the soft and squishy nature of the university administration as well.

When Do The Lawsuits Begin Over Gun Store Closures?

So Just Who Are Buying All These Guns?

So Just Who Are Buying All These Guns?