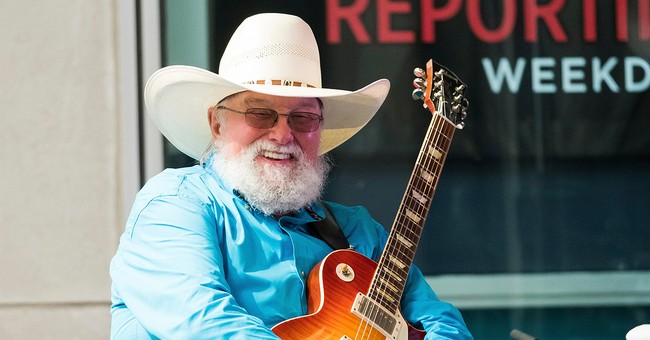 Country music fans, Second Amendment supporters, and patriotic Americans of all stripes are mourning the news that Charlie Daniels has passed away at the age of 83. According to representatives of the Daniels family, the legendary fiddler died of a hemorrhagic stroke at a Nashville hospital on Monday. Accolades and tributes to the famed musician began pouring in almost immediately after his death was made public.

“Few artists have left a more indelible mark on America’s musical landscape than Charlie Daniels. An outspoken patriot, beloved mentor, and a true road warrior, Daniels parlayed his passion for music into a multi-platinum career and a platform to support the military, underprivileged children, and others in need,” a statement from Daniels’ representatives reads.

In addition to his music, Daniels was a major advocate for several causes that were close to his heart including supporting the U.S. military with The Journey Home Project, which he founded in 2014 with his manager, David Corlew, to help veterans.

“My manager, myself and some other people started this Journey Home Project to help — we’ve come to find out there is a great need for assistance by veterans who are returning from their service. Most of the people that we deal with haven’t gotten that,” Daniels told Fox News in 2019.

“We all know the agencies that are tasked with helping our military people are bureaucracies that, by nature, grind slow,” Daniels added at the time. “So there are immediate needs and slow bureaucracies, and we kind of step in and try to help out.”

Charlie Daniels was all about Americans helping their fellow Americans, and the less government or bureaucracy involved, the better. I had the opportunity to interview Daniels several times over the years, and one thing that always stuck with me was his desire to see our nation be everything it’s capable of being.

“We need to forget what race we are, what gender we are, what everything we are; conservative, liberal, whatever we are lets forget that. We’ve got to come together and look at things and be honest with each other about things. This country is coming apart at the seams,” he told me, adding that he wished we could do it without politicians.

“I wish it was just us, We the People, who could say, ‘Okay, we’ve got to work a little harder.’ Unfortunately we can’t do that because the people in Washington have the power to pass laws over us.”

Daniels also spoke to me about growing up in the Jim Crow-era in the South, saying he despised the laws and culture that separated black and white Americans along stark color lines. He also worried, however, that we as a nation hadn’t moved past the legacy of Jim Crow, and urged Americans to find a way to “get past” the past.

“We’ve got to get over all the feelings that we have against each other and come together and say, ‘What’s good for the country?’ If we don’t…

“You know, I’m 75-years old. I’m not going to be here right on and on, but my children and grandchildren are gonna be. To think about leaving the kind of country that we’re fixing to hand over to them if things continue like they are, it’s just literally mind-boggling to me.”

Daniels dabbled in political commentary going back to the 1970s, when his song “Uneasy Rider” became a Top 10 hit while mocking KKK-loving racists in the south looking to beat up “long haired hippies.” In 1975 his song “The South’s Gonna Do It Again” was released, but when the shoutout to southern rock bands like Lynyrd Skynyrd and ZZ Top was co-opted by the Ku Klux Klan, who began playing the song at rallies, Daniels publicly spoke out, telling Billboard magazine, “”I’m damn proud of the South, but I sure as hell am not proud of the Ku Klux Klan. … I wrote the song about the land I love and my brothers. It was not written to promote hate groups.”

Charlie Daniels was a man of strong faith in God and country, and while he had little patience for most politicians and many members of the media, he absolutely loved the American people. Take the lyrics for his 1980 song “In America,” inspired by the Iran Hostage Crisis and a popular favorite at his concerts over the past 40 years.

Well the eagle’s been flyin’ slow/And the flag’s been flyin’ low
And a lotta people sayin’ that America’s/fixin’ to fall
Well speakin’ just for me/And some people from Tennessee
We’ve got a thing or two to tell you all
This lady may have stumbled/But she ain’t never fell
And if the Russians don’t believe that/They can all go straight to hell
We’re gonna put her feet back/On the path of righteousness and then
God bless America again
From the Sound up in Long Island/Out to San Francisco Bay
And everything that’s in between them/Is our own
And we may have done a little bit/Of fightin’ amongst ourselves
But you outside people best leave us alone
‘Cause we’ll all stick together/And you can take that to the bank
That’s the cowboys and the hippies/And the rebels and and the yanks
You just go and lay your hand/On a Pittsburgh Steelers’ fan
And I think you’re gonna finally understand
And you never did think/That it ever would happen again
(In America, did you)
You never did think/That we’d ever get together again
(We damn sure could)
Yeah, we’re walkin’ real proud/And we’re talkin’ real loud again
(In America)
You never did think/That it ever would happen again

We’re doing a little bit of fighting amongst ourselves again at the moment, but Charlie Daniels always knew that America is stronger together. Even in troubled times, he was always searching for that brighter day and a more perfect Union, and that’s a message worth taking to heart as we mourn his death.
Share on Facebook Share on Twitter
Tags: Charlie Danielsgun ownerIn AmericapatriotSecond AmendmentUneasy Rider
Author's Bio: Cam Edwards