NYT Columnist: Defending 2A Is Bad For Democracy Or Something 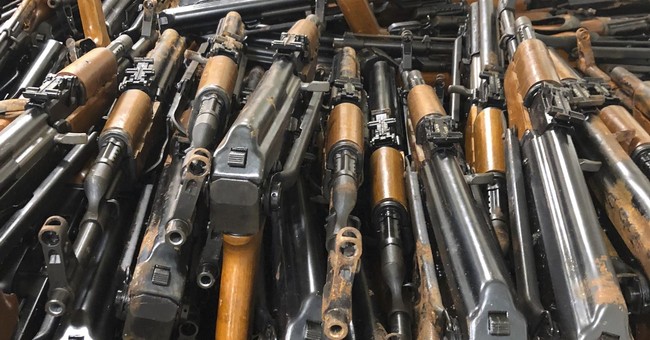 Wil Wilkinson, a contributing writer to the New York Times opinion pages, believes that the “Come and Take It” response from gun owners to Beto O’Rourke’s “Hell yes we’re coming for your guns” is an affront to democracy, and he’s got a few things to say about it.

In my latest at @nytopinion, I argue that the truculent response to @BetoORourke's mandatory assault weapon buyback proposal betrays a disturbing hostility to democracy on the right. https://t.co/Hysuh3EVwP

Wilkinson argues that when gun owners talk about a “civil war” or violence if there is mass confiscation of firearms, that they are acting “seditiously”, and that their refusal to obey a legislatively approved gun ban would be an attack on democracy. It’s an argument that’s divorced from reality, and Wilkinson’s true objective seems to be to try to portray gun owners as dangerous people who don’t have any business owning guns in the first place.

Dogmatic claims about inviolable rights are implicitly claims about the conditions for legitimate political authority and the proper scope of democratic decision-making. But people disagree about rights, and there needs to be space to peacefully negotiate those disagreements.

Funny, I’ve never seen Wilkinson make the same argument about states that decide to legalize cannabis in violation of federal law. And frankly, that’s a much better model to consider when thinking about what disobedience to any sweeping gun ban would look like.

Let’s say a Democrat is elected president in 2020, and with a new Senate majority and continued control of the House, manages to ram through a ban and compensated confiscation of all firearms deemed to be “assault weapons”. What likely to happen next? Let me present one scenario:

First, a lawsuit is filed, and it’s likely that a judge would stay the law while the case made its way through the courts. In the meantime, cities would hold voluntary “buyback” programs, but most of the firearms turned in would be rusty old firearms, not the banned “battlefield weapons of war”.

Now let’s say the Democrat in the White House decides to pack the Supreme Court to guarantee that the law is upheld in a 11-5 decision. The mandatory buyback is scheduled, and on the appointed days, a few people trickle in around the country. At the end of the 6-month amnesty period, about 3-million firearms are turned over for some cash. The other 12-15 million banned firearms remain in the hands of their owners.

During that 6-month period several thousand rural counties across the country declare themselves to be “2nd Amendment Sanctuary” counties, and state that they will not work with federal law enforcement to enforce the gun ban. A few counties actually deputize owners of semi-automatic rifles since the federal ban included a carveout for police and military. Also during that six month period, the Democrat president changes the name of the White House to Woke House, but that’s probably a story for Townhall.com.

Now the six months is over, and the arrests for possession of a banned rifle start taking place. There aren’t many, and those arrested are almost all facing other charges related to drugs or violence. Someone gets pulled over in New Jersey, but the feds don’t prosecute because the gun owner is facing more serious consequences for violating state law. A Kentucky mom uses a banned rifle to protect herself and her kids from a home invasion, but the U.S. Attorney announces he doesn’t feel it would serve the interests of justice to prosecute her.

But there’s no civil war and there’s no mass confiscation of firearms. How could there be? There are 100,000,000 gun owners in this country.Even if you called out every active duty member of the military, every police officer, reserve officer, and deputized security guards, there’s no way to go door to door looking for banned guns without causing civil unrest and establishing a police state. If there was going to be any “civil war”, that would be the actual tipping point. And if it ever gets to the point where a president is ordering that door-to-door search for guns to take place, we haven’t just lost our 2nd Amendment rights. We’ll have lost them all.

Or as James Madison put it in Federalist 46:

Let a regular army, fully equal to the resources of the country, be formed; and let it be entirely at the devotion of the federal government; still it would not be going too far to say, that the State governments, with the people on their side, would be able to repel the danger.  The highest number to which, according to the best computation, a standing army can be carried in any country, does not exceed one hundredth part of the whole number of souls; or one twenty-fifth part of the number able to bear arms.  This proportion would not yield, in the United States, an army of more than twenty-five or thirty thousand men.

To these would be opposed a militia amounting to near half a million of citizens with arms in their hands, officered by men chosen from among themselves, fighting for their common liberties, and united and conducted by governments possessing their affections and confidence.  It may well be doubted, whether a militia thus circumstanced could ever be conquered by such a proportion of regular troops.  Those who are best acquainted with the last successful resistance of this country against the British arms, will be most inclined to deny the possibility of it.

The sheer number of gun owners serves as the strongest check on the ability of the federal government to impose the kind of enforcement Wilkinson demands.

Instead, you’d likely see selective enforcement take place, mostly in deep blue cities. And keep in mind, at this point O’Rourke’s proposing to fine those found guilty of possessing a banned rifle, not locking them in prison. There is, however, a magazine ban floating around Congress that would punish possession of a 20-round magazine with five years in federal prison. Let’s say that bill is put on the books as well. It too is largely going to be enforced in deep blue cities, and primarily against young minority men, many of whom will have no violent criminal history. Getting arrested by a rural sheriff’s deputy for using a 30-round magazine on your property? Not going to happen. Getting busted for carrying a gun with a 17-round magazine? Yeah, that’ll probably happen.

The most likely outcome of any attempted gun ban and compensated confiscation isn’t civil war, in my opinion, but civil disobedience. And where the law is recognized and enforced, those most likely to feel its effects are going to be young men of color, who will face years in federal prison for a non-violent firearm offense. I suspect that any ban that attempted to remove guns from people’s possession would face an ignominious end, much like Prohibition’s repeal in 1933 after a decade of attempted enforcement that frayed respect for the law, turned the law abiding into criminals while empowering actual criminals, and in the end made drinking more socially acceptable to a broader range of society.

It’s a truism, not a threat, to say that any mass violence inflicted on American citizens by the State for exercising a constitutionally protected right would be likely met with a response, but again, as James Madison points out, that’s also highly unlikely to happen of us armed American citizens. Disobedience to bad and unjust laws is in our national DNA, dating back to before we were even a country, but disobedience doesn’t equate to violence, any more than “gun safety” equates to “door-to-door confiscation.” I hate to break it to Wil Wilkinson, but he really wants his gun ban, he should be much more concerned about sending young black men to prison for non-violent crimes than his neighborhood turning into a war zone.