There’s no doubt that the mainstream media has an anti-gun bias, but the media’s ignorance on gun issues is just as bad. In fact, you could make the argument that the lack of knowledge about gun issues is a contributing factor in the bias displayed by many reporters. If they knew more about what they were talking about, maybe they wouldn’t be quite as eager to embrace the idea of banning our way to safety.

The latest example of the news industry’s ignorance on Second Amendment issues comes from CNN and their report on the April NICS figures for gun sales. CNN correctly notes that, while there were 3.5-million NICS checks performed nationwide last month, the National Shooting Sports Foundation says that translates to about 1.7-million checks on firearm transfers. However, CNN is wrong about how the NSSF determines how many of the NICS checks were for firearm transfers and sales.

The NSSF doesn’t cross reference FBI data with actual sales figures provided by gun stores to get their NICS-adjusted figures. They look at the codes used on the NICS checks themselves to figure out which background checks were performed for gun sales as opposed to things like concealed carry applications.

That’s a fairly minor error compared to the whopper that CNN Business then delivers to its audience. 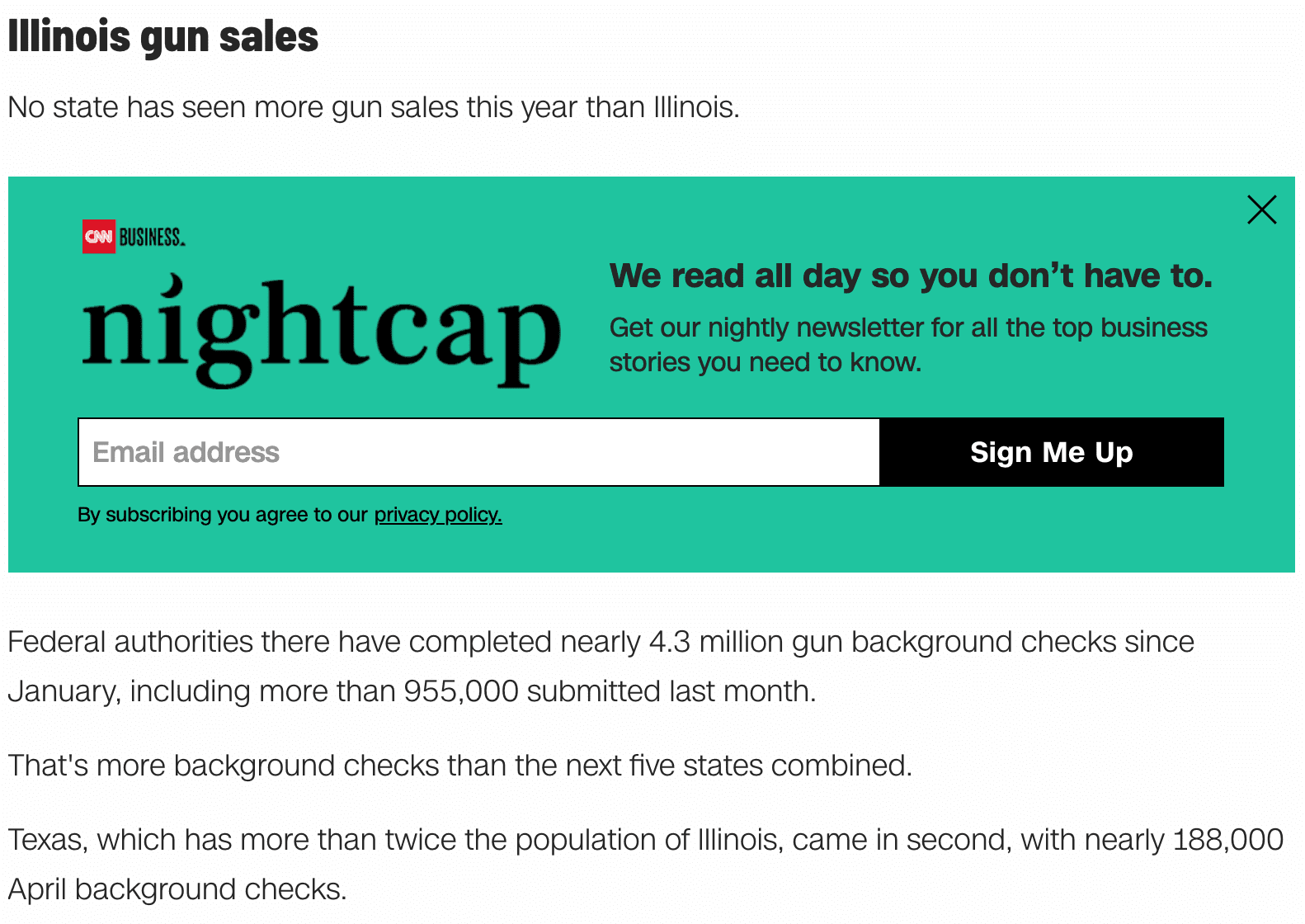 This “fact” didn’t appear odd to anyone working on the story? Not the reporter, the producer, or the editor? No one thought it was strange that Illinois supposedly accounted for more than half of all guns sold in the U.S. last month?

Actually, I guess the CNN crew did find it odd, since they wrote an entire story about it. The problem is that their story is just flat-out wrong. Yes, there have been nearly 4.3-million NICS checks performed in Illinois since January, but the vast majority of them weren’t for firearm transfers.

I reached out to NSSF’s Mark Oliva to get the true NSSF-adjusted figures for background checks on gun sales in Illinois, and the numbers are far lower than the raw numbers that CNN Business claims represent the number of guns sold in the state.

According to Oliva, there’s been a total of 190,838 NICS checks conducted on firearms transfers in Illinois since January, including 44,217 in the month of April. In other words, the CNN Business report is off by more than 900,000 specifically for last month, and their yearly total misses the mark by more than 4-million.

This is downright embarrassing, but it gets worse. CNN actually has a theory about why more than 900,000 guns were allegedly sold in Illinois in April.

There has been a backlog in processing both FOID and concealed carry applications on the part of the Illinois State Police, but that backlog still exists, and it’s currently taking more than four months on average for the ISP to complete the background check process. In order for the backlog to account for the “greatly inflated” sales, the ISP would have had to rid itself of the tens of thousands of applications that it’s currently sitting on, and that hasn’t happened. In fact, there are multiple lawsuits that have been filed over the continuing delays, which CNN Business never bothers to mention.

I’ve seen smaller outfits get this wrong in the past, but it’s absolutely pathetic to see a national news network be so clueless on this issue. And here’s the thing; I picked up on CNN’s error right away because I know this issue well. Most of their audience, on the other hand, is just as clueless as the CNN reporters who are supposed to be educating them on the issue. I can’t help but wonder what other stories CNN is getting wrong that I might not be able to easily spot thanks to my own ignorance when it comes to other topics the network covers.

I wouldn’t be surprised if CNN  ends up just killing this story and disappearing it down the memory hole, but gun owners should keep their ignorance in mind the next time they report on anything having to do with our Second Amendment rights. The anti-gun bias of the talking heads on CNN is one thing, but the outright ignorance displayed by the CNN staff is just as bad… though arguably easier to correct if the network were to make it a priority.