The Utah state legislature is getting ready for a special session later this week, but Gov. Spencer Cox has already declared that Second Amendment Sanctuary legislation won’t be a part of the agenda. Still, there are a lot of folks talking about the issue at the moment, including every one of Utah’s 29 state sheriffs, who issued a joint statement of support for the Second Amendment on Monday. While the idea of a Second Amendment Sanctuary Act isn’t directly brought up in the statement itself, much of what the sheriffs released is clearly in reference to the desire by many Republican lawmakers to pass a bill. 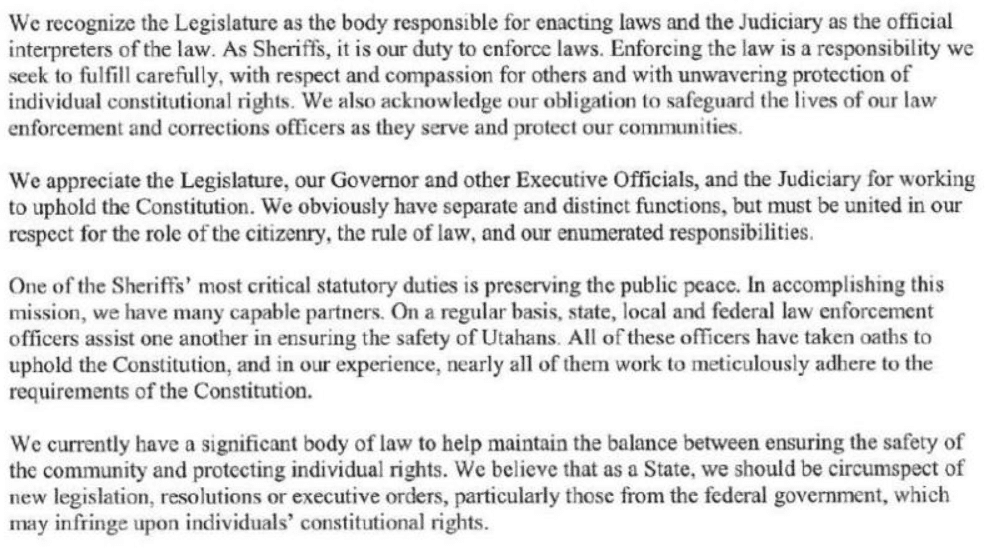 To be perfectly clear, this isn’t an anti-gun statement on the part of the sheriffs at all. At one point in the statement, the sheriffs even “recognize a significant principle underlying the Second Amendment: the right to keep and bear arms is indispensable to the existence of a free people.” Later, the sheriffs underscore that point, declaring:

We live in a time when unlawful violence is commonplace, and along with the victims and survivors of violence, we recognize these tragedies to be irrational, callous and infuriating. Some individuals seek to use any means possible to injure or destroy life or property.

… we humbly report that we are working diligently to prevent and prepare for potential violence or disaster. In doing so, we feel strongly that the focus of these efforts must be on the perpetrator and properly leading through the potential incidents. It is not necessary or wise to focus on the inanimate weapon, instrument or tool of the crime.”

Remember, this is a statement signed by each of Utah’s 29 sheriffs. Getting more than two dozen people to agree to the specific language of a multi-paragraph statement is a significant achievement, and the fact that it wasn’t watered down to meaningless pablum is a good thing.

Still, even though there’s not going to be a Second Amendment Sanctuary bill on the agenda this week, there’s been so much discussion about the idea lately that the sheriffs’ statement just feels… off. It obliquely acknowledges the elephant in the room, but it doesn’t really offer an opinion on it. Worse, because it doesn’t address the issue directly, it ends up raising more questions about how far some sheriffs were willing to go in their stated support.

For example, the statement acknowledges the power of the legislature to pass laws and the judiciary to interpret them, while reserving the enforcement of the laws to agencies like the sheriffs’ departments. Presumably, that means that the sheriffs themselves would not decide whether or not a federal gun control law is unconstitutional, but where would they stand on a piece of legislation like the one recently approved in Missouri, which prohibits county sheriffs and other local law enforcement agencies from cooperating with federal agencies in enforcing any new federal gun control laws? That’s the type of bill that Republicans are pushing in Utah, and the unwillingness of Gov. Cox to include it in the special session is going to push it to the top of the “to do” list when the 2022 session kicks off in just a few months.

I don’t doubt the sincerity of the sheriffs in their support for the Second Amendment. I suspect, however, that there are some differences of opinion among the 29 sheriffs when it comes to Second Amendment Sanctuary language. The tip-off to me is the line about the relationship between the sheriffs’ departments and federal law enforcement.

One of the Sheriffs’ most critical statutory duties is preserving the public peace. In accomplishing this mission, we have many capable partners. On a regular basis, state, local, and federal law enforcement officers assist one another in ensuring the safety of Utahns. All of these officers have taken oaths to uphold the Constitution, and in our experience, nearly all of them work to meticulously adhere to the requirements of the Constitution.

Yes, state law enforcement was mentioned as well, but there aren’t too many gun owners worried about the threat posed by the Utah State Police. Instead, it’s the potential for federal gun control laws that have led to the rise of Second Amendment Sanctuary bills, and one of the concerns that some police organizations have had about the new law in Missouri and proposals in other states is that they would prevent state and local police from working with federal law enforcement on investigating violent crimes as well as possessory offenses, especially as those types of offenses frequently overlap.

It’s not an unreasonable concern to have, but it’s also one that’s easily addressed. The simplest way would be for the Utah legislature to include in the bill an exemption to any federal gun control law that went into effect prior to, say, June 1st, 2021. In other words, law enforcement won’t cooperate in enforcing any new gun laws, but the status quo will remain in effect for laws already on the books.

I’m guessing, however, that if the sheriffs came to the table with ideas on how to make a Second Amendment Sanctuary law practical and effective, lawmakers would listen. Ultimately, though, the central idea of the 2A Sanctuary movement must remain intact; the state and the sheriffs will not cooperate with the federal enforcement of any new restrictions on the right to keep and bear arms. I think a majority of both lawmakers and sheriffs would sign off on that statement, but I don’t think we’ve reached unanimity, even among Republicans, just yet.

Oops: J6 Committee Star Witness' Creditability About Trump Might Take a Huge Hit
Townhall
Cassidy Hutchinson deemed as ‘reliable’ over her memory about ... ketchup?
Twitchy
More Implosion of Hutchinson's J6 Claims as Adam Schiff Steps in It Big Time on CNN
Redstate
Who Wants to Tell the Ridiculous Ladies of 'The View' About the Bahamas?
PJ Media