The Guns Of August: Sales Boom Is Second Highest On Record

This is supposed to be one of the slower times of the year for the firearms industry, but gun sales were still hot in August, with more than 1.3 million background checks performed on firearm transfers last month according to the National Shooting Sports Foundation. To be sure, that’s a pretty steep decline compared to the record high sales in August of last year, but it’s still the second highest number of NICS checks for an August in the more than 20 years that the National Instant Check System has been in place. 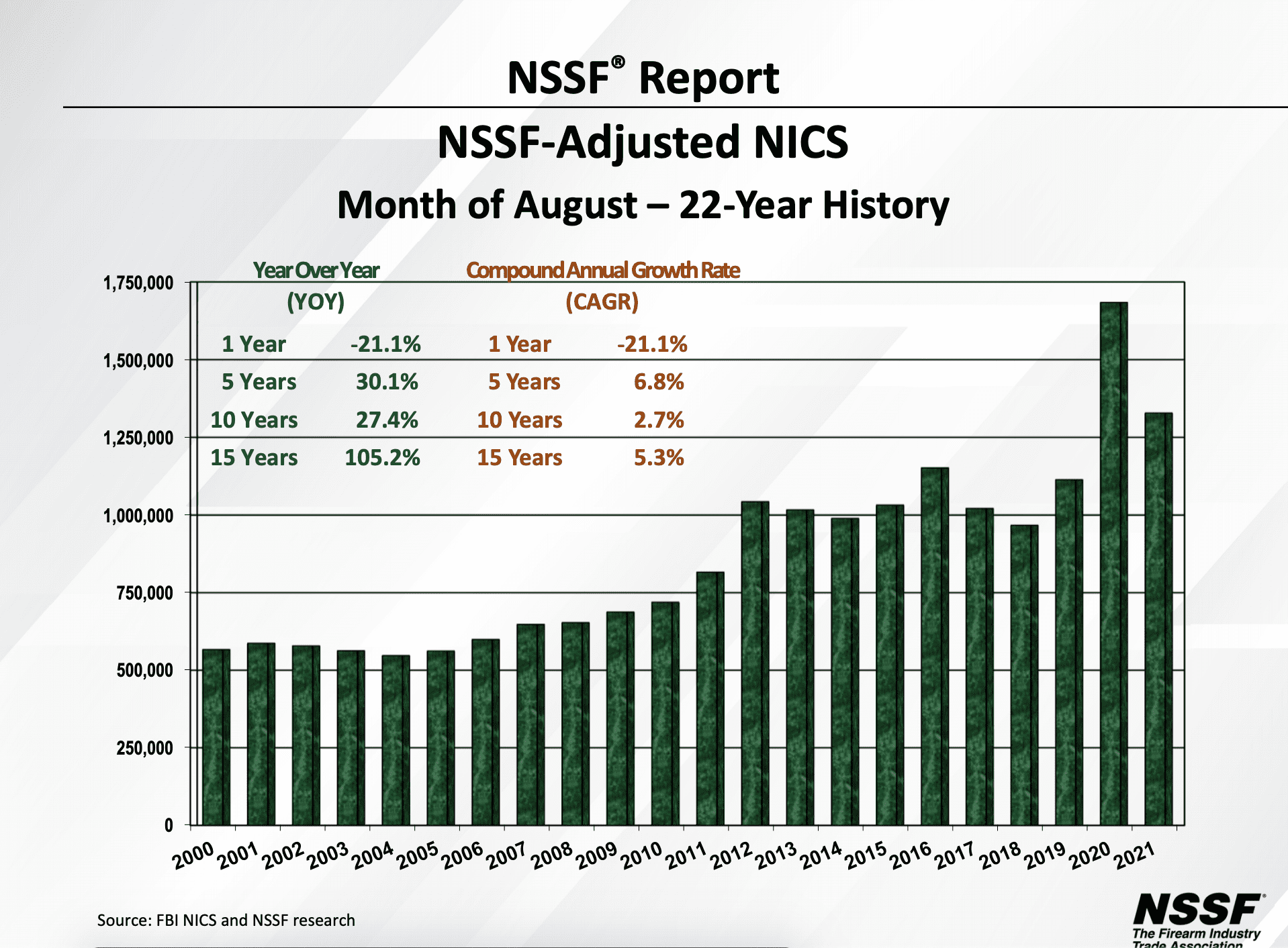 Leaving out the record-setting number of sales last year, the last time we saw August sales figures approaching 1.3 million was back in 2016, in the heat of the presidential race between Donald Trump and Hillary Clinton. Concerns over Clinton’s gun control agenda sent sales skyward back then, but we don’t have a presidential election prompting people to head to their local gun store this year. So what’s driving the sales this year? The NSSF’s Mark Oliva points to one factor: Joe Biden’s pursuit of more restrictions on the right to keep and bear arms.

The continued demand for lawful firearm ownership is notable because it comes at a time when the Biden administration is pushing to achieve their radical gun control agenda. President Joe Biden nominated a gun control lobbyist to lead the Bureau of Alcohol, Tobacco, Firearms and Explosives, is calling for the repeal of the Protection of Lawful Commerce in Arms Act (PLCAA) to allow activist lawyers to sue firearm manufacturers into oblivion, and is pursuing end-runs around Congress through proposed rules that are outside the Executive Branch’s Constitutional authority.

I’m beginning to think that we may be approaching the “new normal” in terms of gun sales after last year’s record pace. According to the NSSF, there were about 8.5-million new gun owners in 2020 amidst the dueling concerns of the COVID pandemic and the civil unrest, riots, and sharp increase in violent crimes in many cities, but Oliva says the last few months have shown more of a “strong and steady” demand.

Retail firearm sales remain steady and are still above historic norms. August 2021’s figures rose slightly over July 2021’s figures and this indicates that there is a continued strong and steady demand from Americans choosing to exercise their Second Amendment rights. August 2021’s adjusted totals are the second strongest of any August, only behind the outlier year of 2020 – when 21 million background checks were conducted for gun sales. So far in 2021, there have been over 12.4 million background checks for the sale of a firearm. That is within striking distance of 2019’s full year totals, when 13.2 million background checks were conducted for a gun sale. Four months remain, during which firearm sales historically rise.

I think we’ll surpass 2019’s totals once we see the September NICS numbers, and my prediction is that we’ll end 2021 with somewhere between 18 and 19 million background checks performed on gun sales. Not quite as big as the 21 million sales in 2020, but still well above historical averages and, as Oliva says, a clear indication that Americans are embracing their right to keep and bear arms even as the Biden administration and their anti-gun allies work to eradicate them.