Last week, a Morning Consult/POLITICO poll showed Republicans with a nearly double-digit advantage over Democrats on the issue of “gun policy.” This week, Gallup released a poll showing a 15-point drop in support of new gun laws since 2018, and now Quinnipiac has released its own survey that details a sharp decline in those backing restrictions on the right to keep and bear arms.

Clearly we’re not talking about a statistical blip or an outlier poll here. Take the specific numbers with as much skepticism as you’d like, but the trend is obvious; more Americans are turning their back on the gun control lobby’s ideology and embracing their Second Amendment rights.

This compares to an April poll when 54 percent of Americans supported stricter gun laws and 42 percent opposed them.

This is the first time since December 2015 that fewer than 50 percent of voters are in support of stricter gun laws. At that time, 47 percent supported while 50 percent opposed.

Note the partisan breakdown above, which should cause Democrats to hit the panic button if they’re paying attention. Yes, support for gun control is slightly higher on the Left than opposition is on the Right, but it’s the fact that indies are coming down on the side of the Second Amendment by a double digit margin that shows why this issue is going to be so toxic for the Left in 2022.

Quinnipiac isn’t the only polling outfit to pick up on the erosion of support for gun control among independents. Take a look at the partisan breakdown in Gallup’s poll released this week. 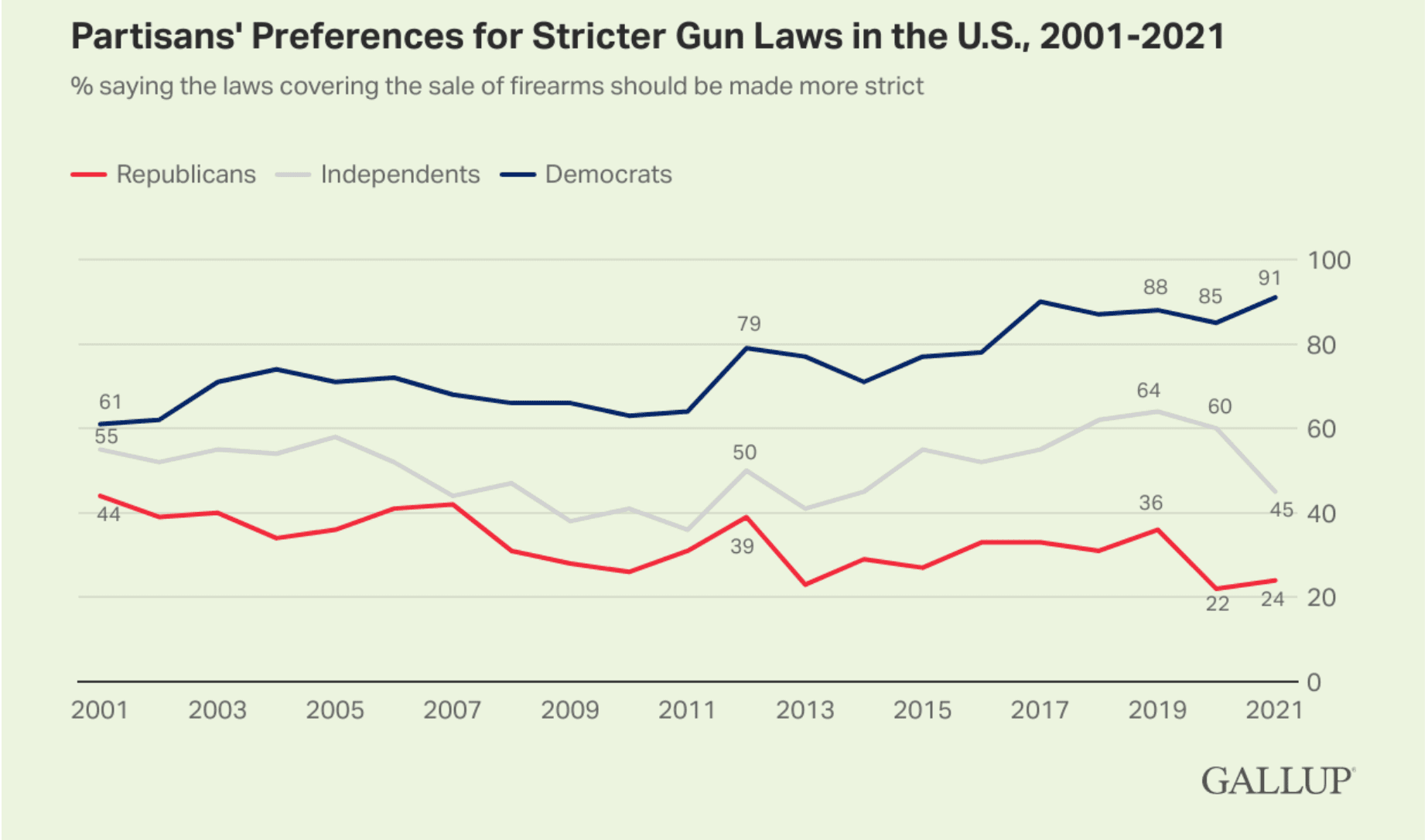 According to Gallup, support for gun control is actually up slightly among Republicans (though within the poll’s margin of error) compared to last year. Democrats are embracing gun control in numbers we haven’t seen in decades, if ever, but look at what’s going on with independent voters.

There was a slight decline among indies between 2019 and 2020, but support has just absolutely cratered over the past year as violent crime has exploded, particularly in deep-blue Democratic-run cities. Going back over the past decade, independent support for gun control has generally run about 20 to 25 points behind where Democrats poll on the issue. Right now there’s a 46-point gap in the Gallup Poll and an even larger chasm in Quinnipiac, which shows a 52(!)-point spread between Democrats and independents on the issue.

Beyond those who’ve made a name for themselves by declaring that “hell yes” they’re coming for our guns, I would expect that most Democrats running in suburban swing districts or in statewide elections that aren’t taking place in reliably blue territory aren’t going to be talking up their support for Joe Biden’s proposed gun ban between now and next November.

But the Democratic Party is too wedded to the gun control ideology to actually abandon it ahead of the midterms, so instead those on the Left who dare to make an issue out of “gun safety” are going to mostly stick to those issues that tend to poll well; universal background checks and red flag laws primarily, while also trying to ding Republicans for their “extreme” gun laws like Constitutional Carry. It’s the best strategy they have, but I don’t think it’s going to be nearly enough for the Left to stave off disaster. Americans are increasingly concerned about their personal safety, and that means they’re thinking more about buying a gun… not banning them.