Survey: 33% of voters say they plan to buy a gun because of Russia/Ukraine war

Another day, another poll showing that Russia’s invasion of Ukraine has prompted many Americans to take a closer look at their Second Amendment rights. Last week we told you about a poll that found 2/3rds of respondents believe the war has demonstrated the importance of our right to keep and bear arms, and now a new survey from the group Gun Made is providing more evidence that the war in Ukraine has been a clarifying event for many voters when it comes to the Second Amendment and their right of self-defense.

Results also showed that nearly 40% of Republicans and Democrats have purchased a gun since Biden was elected, and roughly one-third of U.S. voters intend to purchase a gun due to the Russia and Ukraine war.

“It means people in the US value their ability to protect themselves from real or perceived threats,” said Brady Kirkpatrick, founder of Gun Made. “And should conflict come to U.S. soil, they want the ability to defend themselves and their homes.”

The survey’s sample size of 400 voters is a little on the small end, but there’s nothing obviously skewed in the poll’s make-up of 36% Democrats, 37% Independents, and 27% Republicans. If anything, that probably undercounts current Republican voters.

Another interesting finding from the survey is that most Americans, regardless of whether or not they own a gun, say that “gun violence” is one of their top issues. Changing gun laws, on the other hand, isn’t a big priority. 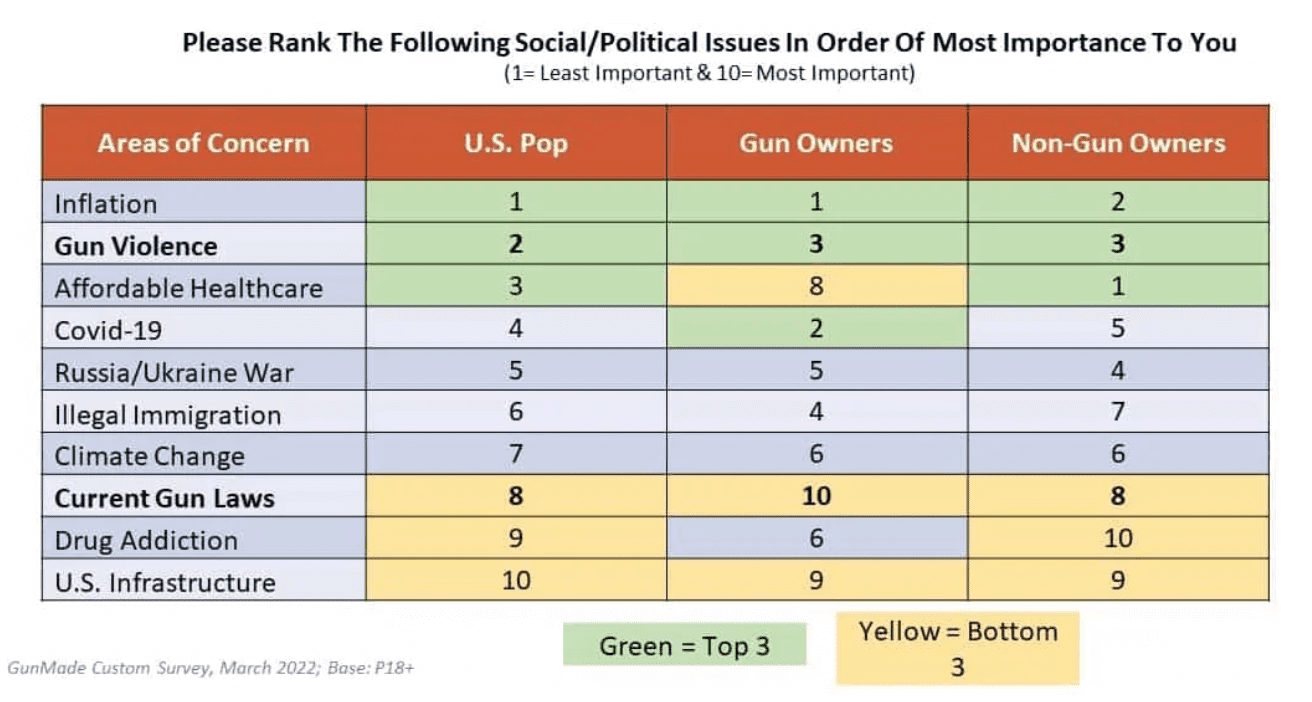 The fact that inflation is the top concern for most Americans isn’t exactly shocking news, but it’s fascinating to see that most voters don’t equate our current gun laws with “gun violence.” Even non-gun owners don’t seem to think that the way to address gun-related violence is through changing our gun laws, which is devastating to the narrative put forth by the gun control lobby.

It’s also interesting to me that “drug addiction” was so far down on the list, given that drug and alcohol-related deaths are almost five times higher than the number of gun-related deaths in the United States. Since the start of the COVID epidemic drug overdose deaths have climbed to more than 100,000, and there were nearly as many alcohol-related deaths last year, but those deaths don’t get nearly the amount of media attention or press coverage as a shooting does.

When it comes to who owns guns, the survey found that while Republicans are far more likely to acknowledge their gun ownership, a healthy number of Democrats are exercising their Second Amendment rights as well. 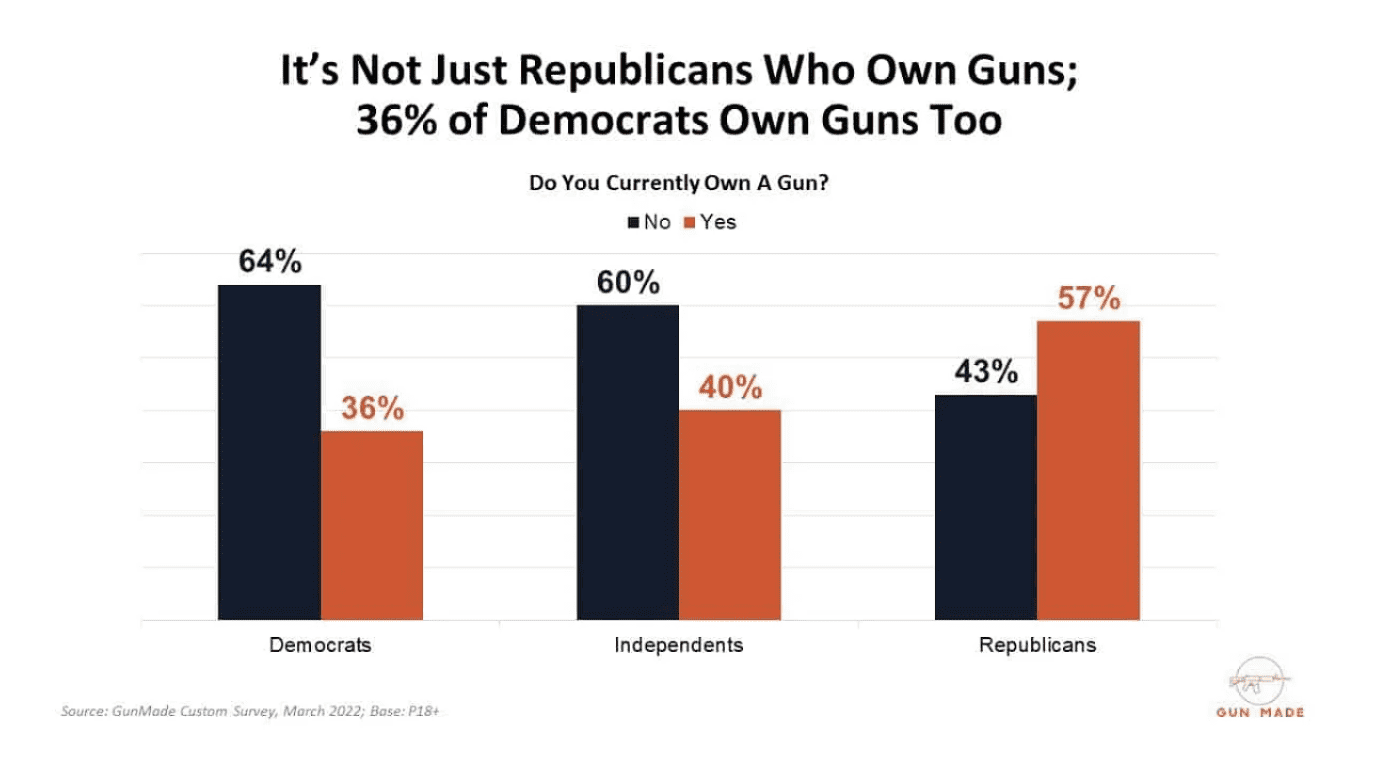 The 36% of Democrats who say they currently own a gun is quite a bit higher than what we’ve seen in other recent polls. A Pew Research survey from last September, for instance, found that just 16% of Democrats reported owning a gun, with another 9% saying they live in a house where someone else owns a gun, but they don’t own one themselves.

This throws a bit of a wrench in the idea that liberals/Democrats are staunchly against guns and pro extreme forms of gun control. After all, if more than ⅓ of the Democrats we surveyed on a gun themselves, it’s a bit difficult to be anti-gun then, isn’t it?

Interestingly, the numbers of people who have bought a gun since Joe Biden was elected President are roughly the same between political parties: 38% of Democrats and 37% of Republicans have purchased a firearm within the past two years.

Further, 36% of Democrats say they haven’t purchased one yet, but will before he leaves office. That’s compared to the 27% of Republicans who said the same.

I hate to break it to Brady, but owning a gun doesn’t automatically make someone a Second Amendment advocate, or even an opponent of gun control.

I’m happy to see the survey found more than 1/3rd of Democrats reported owning a gun, and my hope is that as more Americans across the political spectrum embrace their right to keep and bear arms a good number of them will become active in defense of those rights, but at this point it’s still fair to say that Democrats as a party are still staunchly opposed to gun ownership in general, and are certainly far more interested in restricting the right to keep and bear arms than strengthening it.

The war in Ukraine may be accelerating the growing diversity of gun owners in the United States, however, and maybe one day we’ll actually get to the point that someone’s voting preference isn’t great predictor for where they stand on the Second Amendment. For the time being, though, Democrats are still definitely the outlier when it comes to both showing support for and exercising our right to armed self-defense.

Feds investigate gun store after hundreds of firearms are discovered in dumpster
Feb 08, 2023