The editors of the Houston Chronicle have a new scapegoat for the age-old problem of violent crime: “Second Amendment absolutism.” As we show on today’s Bearing Arms’ Cam & Co, however, their anti-gun rationale simply doesn’t stand up to the slightest bit of scrutiny, and their calls for criminalizing our right to keep and bear arms would only make us less safe.

The first problem with the Chronicle’s screed comes in its opening paragraph. What do they use as their first piece of evidence that America is devolving into a gun-law-free zone?

The same week that a 62-year-old man boarded a subway train in Brooklyn and opened fire on his fellow passengers with a Glock 9-millimeter handgun, Georgia became the 23rd state to allow almost anybody and everybody to walk around with a concealed handgun on their person, no permit required. Texas was the 20th to dispense with permits; it’s a trend.

That’s right. The paper actually pointed to a shooting on a New York subway by someone who was not lawfully carrying a gun in order to argue that we’re making it too easy to exercise our Second Amendment rights. Of course, they also got the numbers wrong when it comes to Constitutional Carry: Georgia is the 25th state, not the 23rd, to recognize the right to bear arms without the need for a government-issued permission slip.

It’s not an auspicious beginning for the op-ed, which never does make the case that we live in a land of Second Amendment absolutism. There’s no attempt to explain away the hundreds of gun control laws on the books in states like California or New York, not to mention the NFA, GCA, and the other gun laws enshrined in federal statute.

Unfortunately things only get worse from the opening sentences. Here are the Chronicle editors trying (and failing) to make the case that increased gun sales are responsible for the massive upswing in violent crime since 2020.

The subway shooter has been walking around with a gun at least since 2011. That’s when he purchased his gun legally. Millions of his fellow Americans during the past couple of years have been buying guns at an ever-accelerating rate. In March last year, federal background checks reached one million in a week for the first time since the government began tracking them in 1998.

… People usually die when guns are the weapon of choice, and these days they’re dying at accelerating rates. According to data released last year from the FBI, homicides in 2020 were up by a quarter from the year before. Data from a sampling of 37 cities shows that the trend has continued through the first three months of 2022, with about 18 percent more homicides than in the same period last year. Although the homicide rate is still far lower than in the 1990s, the trend is troubling. More guns = more gun deaths.

If more guns = more gun deaths then the number of firearm-related deaths would be climbing each and every year. That’s simply not the case, as this graph from the liberal Brennan Center for Justice shows. 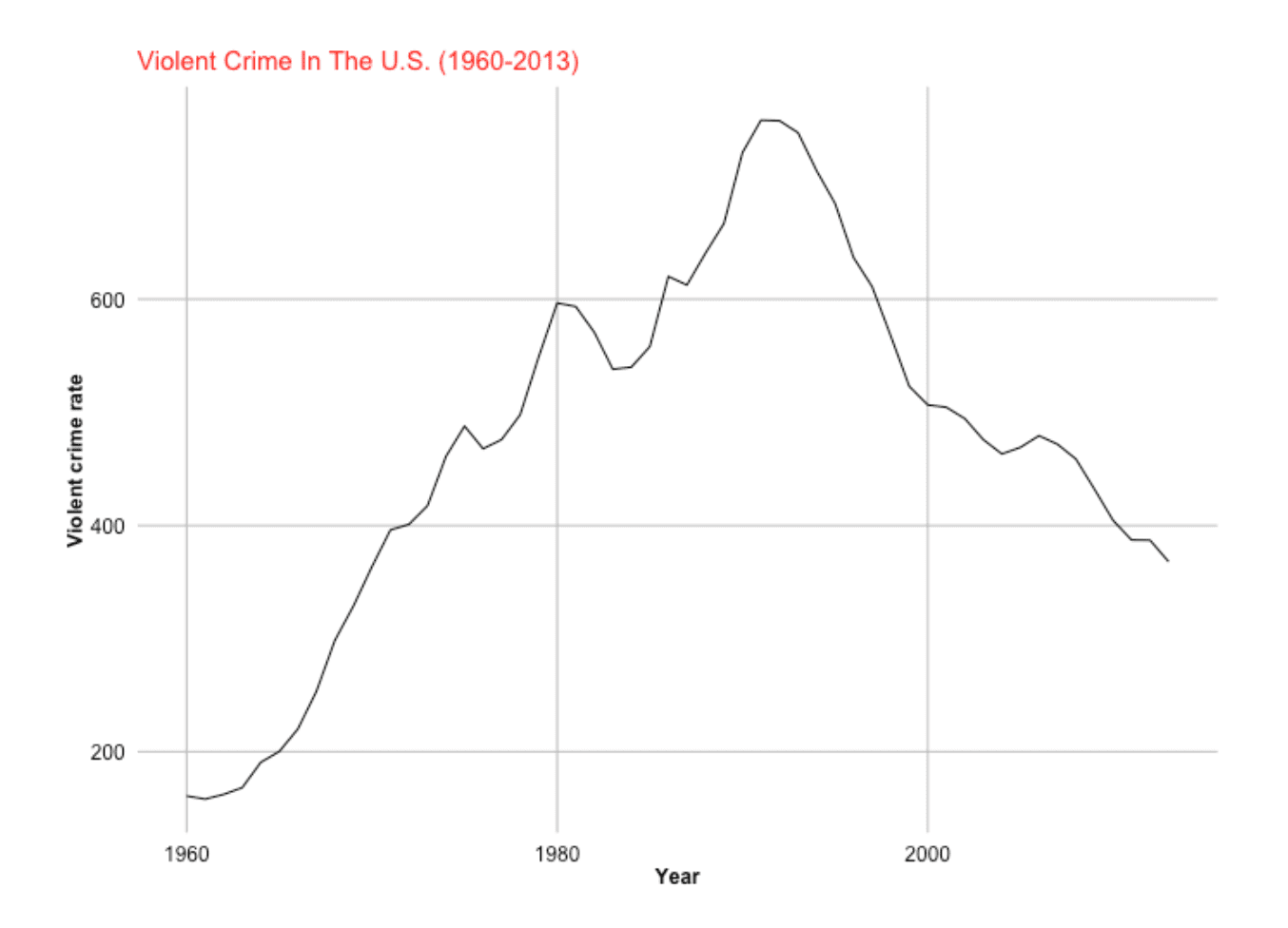 Crime rose almost continually from the early 1960s through the early 1990s; a time period that saw the passage of the Gun Control Act of 1968, bans on handguns in Washington, D.C. and Chicago, California’s ban on “assault weapons”, and a host of other gun control laws enacted at the state and local level. That crime spike also took place before any state save Vermont had adopted Constitutional Carry, and it happened when there were far fewer firearms in the hands of law-abiding Americans.

And then a funny thing happened starting around 1991; violent crime started declining. Yes, even before the Joe Biden-authored ban on “assault weapons” was signed into law by Bill Clinton, violent crime was already declining, and it continued to do so for almost thirty years; a time period that includes the adoption of “shall issue” carry laws by dozens of states, permitless carry laws in more than 12 states, tens of millions of Americans becoming concealed carry licensees, and big surges in gun sales in both 2012 and 2016.

If “more guns = more crime” then none of that would have happened. The level of violent crime never would have peaked in the early 1990s, and it most certainly wouldn’t have dropped by 50% while millions of Americans were bearing arms for the first time.

Honestly, I could pick apart every paragraph of this Chronicle op-ed, but I’ll limit myself to one more item; the editors’ support for Joe Biden’s attempt to talk tough on “ghost guns.”

Biden’s order mandates background checks on ghost-gun purchasers and requires adding serial numbers to the assembled weapons. It’s a modest effort to address a real problem, but like Pavlov’s canine pal, our own Sen. Ted Cruz rose up in hind-legs dudgeon. He announced plans to introduce a resolution to block the ghost-gun order.

“By introducing this resolution, we’re pushing back,” Cruz said, who was joined by three other GOP senators. “We want to stop the false narrative that links the rise in crime to ‘ghost guns,’ and firearms, and we want to protect law-abiding citizens who are exercising their Second Amendment rights.”

Cruz’s Second-Amendment absolutism makes about as much sense as a man stepping into a subway car and opening fire with a Glock. As polls show, most Americans realize that modest gun-safety measures have nothing to do with abridging Second Amendment rights. They have to do with pushing back against only-in-this-country gun insanity, insanity that tolerates gun deaths as mere collateral damage. Only in this country can we rise up and say “Enough.”

You can rise up and say “enough” all you want, and it’s going to have the same impact on violent crime rates that the Gun Control Act of 1968 had; none at all. Biden’s attempt to criminalize some home-built firearms will do more to create non-violent offenders than actually deter violent criminals, and calling it a “modest effort” is a pathetic attempt to avoid labeling the measure what it truly is: ineffective and aimed in the wrong direction. The crime spike that started in 2020 has far more to do with the lack of consequences for criminals than a lack of gun control laws, and instead of putting new laws on the books we should be putting more police on the streets and more prosecutors (and public defenders) in court, while reducing plea bargains and removing non-violent possessory firearm offenses from statute to ensure that our decidedly imperfect criminal justice system is most effective when it comes to the most violent offenders.