Denver Mayor Michael Hancock is calling on the city council to impose a new ban on legal gun owners lawfully carrying their firearm in government-owned buildings and public spaces including parks, despite the fact that the state’s recent adoption of gun control restrictions has done nothing to stem the growing violent crime rate in Colorado’s capital city.

On today’s Bearing Arms’ Cam & Co we’re taking a closer look at the proposed policy, which is expected to be sent to the full City Council during a committee hearing today, as well as some of the hare-brained commentary in support of the ban from one of the council’s most anti-Second Amendment members.

As Denver alt-weekly Westword explains, the current push for the carry ban stems as a direct result of the Colorado legislature’s repeal of statewide firearms preemption last year, allowing cities across the state to impose local ordinances more restrictive than state law. Almost as soon as the bill was signed by Gov. Jared Polis, Denver politicians were looking at new laws to put on the books.

The Denver City Attorney’s Office then began crafting legislation that became the proposal now being considered by the council committee: a ban on concealed carry in any building owned by, leased by or leased to the city, and also in Denver parks and park facilities. That would ban firearms in the Colorado Convention Center, for example.

Under this ordinance, a first offense for violating the rule would carry a $50 fine, which is the maximum penalty written into a state statute for a first strike. A second violation of the rule could carry up to a $999 fine and 300 days in jail.

[David] Kopel, a longtime Second Amendment advocate, believes the City of Denver should wait until a current U.S. Supreme Court case related to gun laws is decided sometime over the summer before voting on the proposal. “They’d certainly be better off avoiding litigation,” he says.

Kopel, who’s been a frequent guest on Cam & Co and someone I consider a personal friend, is right that the city would be better off waiting if politicians are concerned about passing a law that won’t be overturned by the courts, but I don’t think that’s what’s really driving this debate any more than the city’s rising violent crime rate. As City Council member Robin Kniech made clear during a hearing for the bill earlier this month, supporters of the ban are specifically targeting legal gun owners who are lawfully carrying a firearm for self-defense.

“I think our community is safer with fewer guns, and I think public safety is best protected by those with training. We have some issues with our public safety needing more of that training and more accountability themselves, but that doesn’t mean that I’m ready to turn over the safety of our parks and public spaces to those with no training and without the accountability that we have for our safety officers for the city,” Kniech said at the April 13 committee hearing.

It’s clear from Kniech’s comments that for her, at least, this proposed carry ban is designed to curtail the Second Amendment rights of law-abiding citizens. In her mind, you don’t have the right to protect yourself in public spaces. Instead, you must leave your own safety and security to the “trained professionals,” even though the Supreme Court has emphatically declared (in a case originating in Colorado, no less) that police are not obligated to protect any individual from violence.

Kniech also declares that she’s not “ready to turn over the safety” of parks to legal gun owners with valid concealed carry licenses, but in reality what she really wants to do is upend the status quo and prevent people from protecting themselves. That’s not only a bad idea; I’d say it’s unconstitutional. It’s also unconscionable given the rise in violent crime across Colorado and in Denver specifically over the past few years. 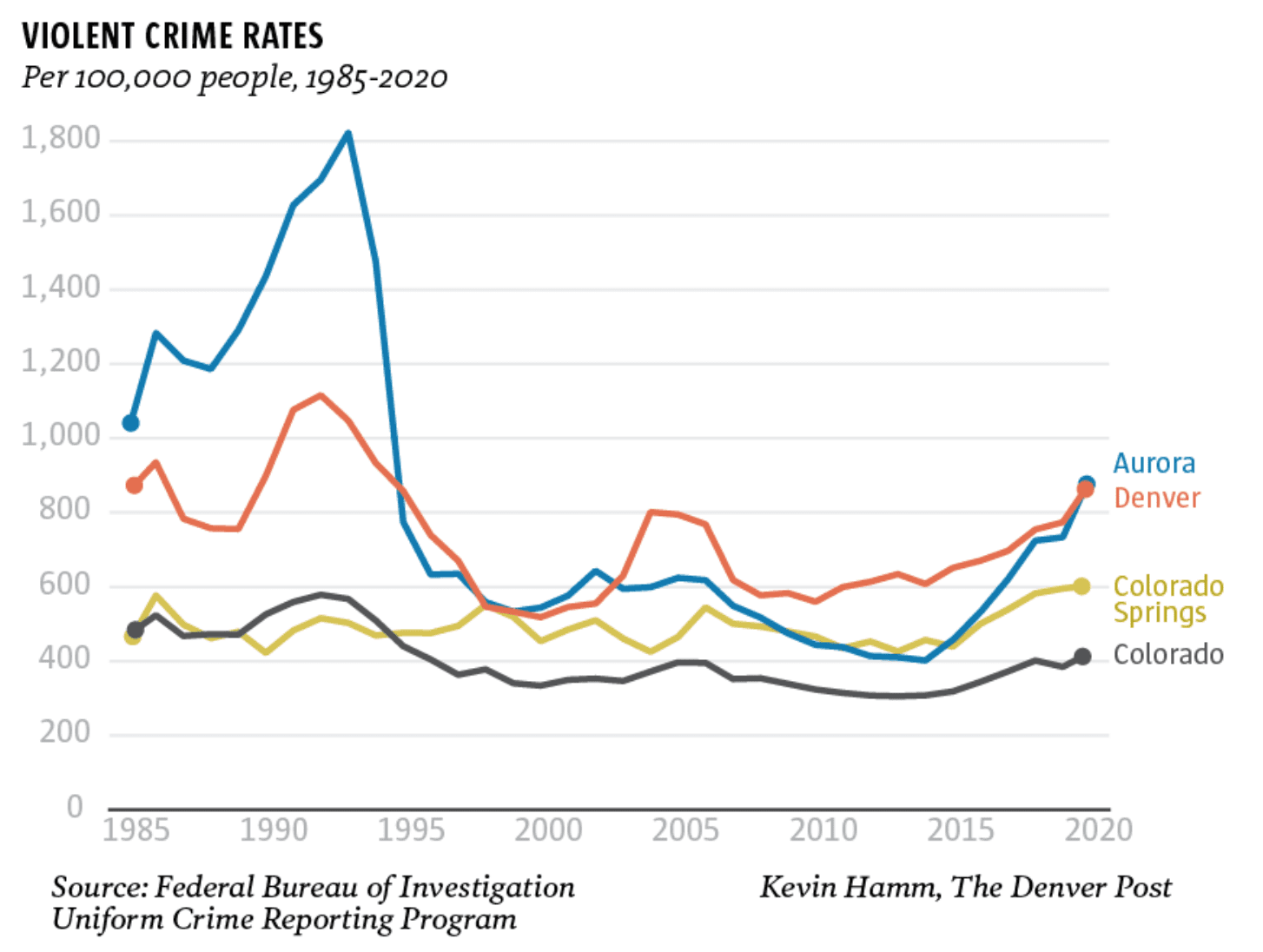 That chart from the Denver Post tells an interesting story about crime in Colorado; namely that it really started to increase in 2014, the year after lawmakers imposed a ban on “large capacity” magazines and implemented universal background checks.

More gun control laws have failed to reduce Denver’s violent crime rate, and now city council members appear poised to make it illegal to act in armed self-defense in the city’s parks and public buildings. Something tells me that the city will fully enforce that ban if it’s allowed to go into effect… unlike some of the other prohibitions already in place in the city’s park system.