The Federal Bureau of Investigation is out with a new report on active shooter incidents across the United States last year, and there are some significant findings worth talking about, including the fact that several of the incidents were stopped by armed citizens.

The report details 61 “active shooter incidents” last year, which the agency defines as “one or more individuals actively engaged in killing or attempting to kill people in ai populated area.” Specifically excluded are acts of self-defense, gang and drug-related shootings, and domestic incidents, as well as “crossfire as a byproduct of another criminal act”. And while gun control activists invariably point to these types of attacks as justification for their attempts to criminalize the right to keep and bear arms, the report’s data suggests that gun control doesn’t serve any sort of preventative benefit to stopping these attacks.

According to the report, the most restrictive state in the Union when it comes to gun control laws also led the way in the number of active shooter incidents. California had six such incidents last year, more than any other state, though Texas and Georgia were close behind with five such incidents reported in each state. Active shooter incidents were reported in 30 states altogether, up from 19 states in 2020, with a total of 243 Americans killed or wounded in the attacks. 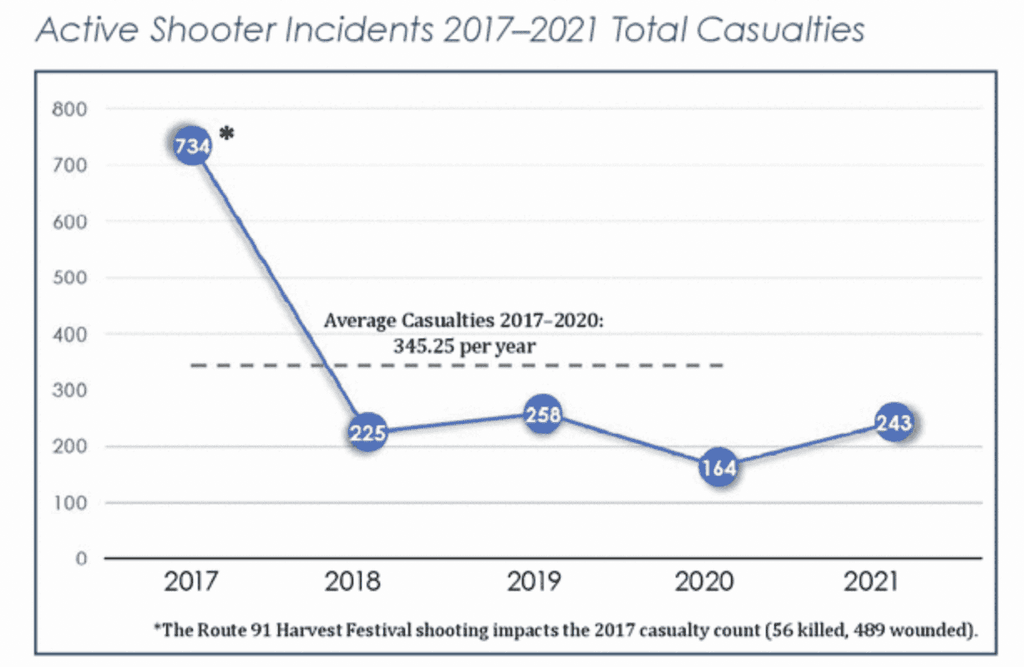 The FBI report notes that in 17 of the 61 incidents, law enforcement “engaged the shooter,” while there were six incidents where citizens either “engaged” the attacker or where “citizen involvement impacted the engagement.” It’s unclear to me what differentiates those two categories, because in both cases there were armed citizens who put a stop to the attack or prevented any further bloodshed.

One example of “engagement” noted by the FBI was the attack at a Metarie, Louisiana gun store in February of 2021, in which a suspect shot and killed two people and wounded two more before he was shot by multiple armed employees of the business. An example of “citizen involvement” in the FBI report was the shooting at an Agrex grain elevator in Superior, Nebraska last October when a recently fired employee left the building only to return a short time later with murder on his mind.

The entire shooting event lasted under 20 seconds, according to NSP, and was briefly halted due to the gun jamming. NSP said [the suspect] fired a total of five rounds in the incident.

NSP said there were eight employees in the building at the time and others outside. Roby said supervisors were on scene during the shooting due to the termination and other employees were there “because they worked there.”

In addition, troopers say the man who returned fire did prevent it “from becoming even worse.”

Troopers say the Nuckolls County Attorney will not prosecute the man who returned fire.

…  “The Nebraska State Patrol considers all the survivors of this terrible incident to be victims,” said Capt. Jeff Roby.

Roby said NSP would not be naming the man who returned fire “and actively stopped this active shooting event. That man’s quick actions likely saved lives.”

Of the six incidents in which civilians either “engaged” or “involved” themselves in stopping the active shooter, four of them involved the defensive use of a firearm (the other two involved citizens tackling the shooter after five people were shot, and an Idaho teacher who talked a 12-year old girl into giving up a gun that she had used to shoot three people at a middle school). None of the incidents involving armed citizens took place in “may issue” states, by the way.

Just two of the 61 incidents covered in the FBI’s report took place at a school, with three other incidents unfolding at other government buildings. The vast majority of these targeted attacks took place in “areas of commerce” (32 incidents) or “business environments open to pedestrian traffic” (28 incidents).

The FBI report also notes what the agency calls an “emerging trend involving roving active shooters”; individuals who shoot in multiple locations and in some cases over multiple days, though it didn’t provide any details on exactly how many of the 61 incidents could be classified as such.

In light of today’s shooting at an elementary school in Uvalde, Texas, this report is a timely reminder that blue states with restrictive gun control laws are not immune to these types of heinous crimes, especially when shooters may specifically be looking for locations where there will be few, if any, armed citizens present. We’ll be hearing no end to the claims that the Uvalde shooting happened because of Texas’ Constitutional Carry law, but the facts are clear that states like California are no less likely to be the scene of a targeted attack, even with the dozens of gun control laws already in place.

Getting the premise of gun culture all kinds of wrong