Uvalde native Matthew McConaughey’s trip to Washington, D.C. to push for new gun contr… er, gun “responsibility” laws was capped off by his appearance in the White House press office on Tuesday afternoon, where he delivered an impassioned speech that touched on his own experiences with firearms, an emotional and poignant look at the lives that were lost in the attack on Robb Elementary, and a plea to change the nation’s gun laws in response to the horrific incident.

Matthew McConaughey: "Uvalde is where I was taught to revere the power and the capability of the tool that we call a gun. Uvalde is where I learned responsible gun ownership…Even from the inside of our vehicle, you could feel the shock…the pain…the denial." pic.twitter.com/4V6a0AdqlU

Now, not much of what McConaughey proposed is currently a part of the Senate discussions, which at the moment appear to be focused on money for improved school security and mental health programs, as well as grants to states that establish their own red flag laws and including felony records of juveniles in the records accessed during background checks conducted by the National Instant Check System, though Democrats are apparently pushing to include a ban on sales of semi-automatic rifles to adults under 21. What McConaughey was really doing at the White House was to help get “something” in place, even if it doesn’t resemble Joe Biden’s actual wish list on anti-gun actions, and his speech was warmly received in some fairly unexpected quarters, including on Fox News.

… MacCallum suggested that some of the proposals McConaughey advanced are worth implementing:

You talk about a waiting period. A waiting period is something that Americans seem to agree on in this country. Nobody is talking about taking away the rights of gun owners, just making it a little bit older, like we do for drinking and other things in this country. And making that waiting period… from 18 to 21. That’s a cooling off period that might have changed the trajectory in the children’s lives that you covered, because I remember when you came back from Sandy Hook, Bill. And it was a very, very, very rough time.

McCallum is absolutely wrong about the age of active shooters. According to the FBI’s recent report on active shooters in the United States last year showed that the vast majority of these types of killers were at least 25-years old. In fact, the most common age range for active shooters last year was between the ages of 25 and 34. 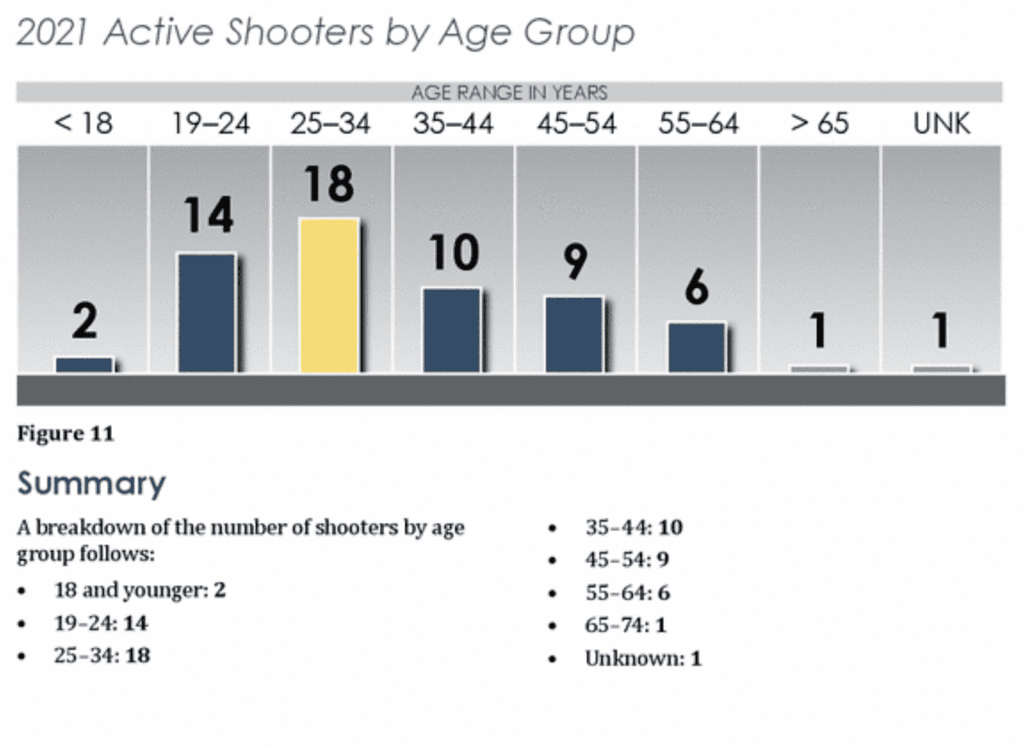 This, of course, completely undercuts McCallum’s (and McConaughey’s) argument that by imposing a ban on gun sales (or even a more “modest” ban on the sale of semi-automatic rifles) to adults under the age of 21 we can make a significant impact on these types of mass murders.

Check out our sister site Twitchy for more reactions to McConaughey’s address, which range from “surprisingly based” to “I appreciate his sincerity but there are still constitutional issues” with his proposals.

It’s easy for gun owners and Second Amendment activists to shrug off McConaughey’s White House appearance as just another celebrity pushing for more restrictions on our Second Amendment rights, but I think that would be a mistake. McConaughey didn’t sound like a typical gun-grabber, even while he was pushing for some of the gun control lobby’s pet policies. He did a good job of making those proposals sound “reasonable”, especially to folks who aren’t deeply steeped in this issue and haven’t thought much about the consequences (intended or otherwise) that these proposals would have on the tens of millions of responsible, law-abiding Americans.

Did he actually sway anyone to change their mind? I tend to doubt that any one speech can be a gamechanger on any issue, but minds may already be changing regardless. A new USA Today/Ipsos poll shows half of all Republican voters surveyed say they support “stricter” gun laws, up from 35% in a survey conducted last year. That’s not a full majority, and those numbers will undoubtably decline in the coming weeks, but it’s still not good news for Second Amendment activists hoping to keep any and all gun control items off of Joe Biden’s desk between now and November, and to me it’s a clear sign that 2A groups must be talking to non-gun owning conservatives in addition to mobilizing their own members in opposition to the current talks on Capitol Hill.

If You Really Wanted to Destroy the U.S., Then...
Townhall
Place your bets! People are speculating why Klaus Schwab is in Washington, DC
Twitchy
Did an ‘LGBT-Caucus’ California State Senator Just Pull a 'Jussie Smollett?'
Redstate
The Morning Briefing: Why Gavin Newsom Said 'No' to 2024...for Now
PJ Media