I lived in northern Virginia for almost ten years, and about the only time I’d ever use the Metro transit system was when I’d take my kids into Washington, D.C. to visit one of the museums on the National Mall. It wasn’t terribly convenient for my daily commute to and from work, but my biggest issue was the fact that firearms were prohibited on the Metro trains, even in Virginia, where the gun laws are much better than Washington, D.C. and Maryland, which are also served by the Metro Transit Authority.

Now that ban is being challenged in federal court, with four gun owners filing suit on Thursday in an attempt to undo that restriction, which they say is contrary to the history and tradition of the right to bear arms in self-defense.

“There is not a tradition or history of prohibitions of carrying firearms on public transportation vehicles,” reads the lawsuit, which was filed by George Lyon, a D.C.-based lawyer with Arsenal Attorneys who has filed multiple lawsuits in the past over the city’s restrictive gun laws. “Public transportation systems did not exist as they do today at the founding of the nation. However, there was plainly a tradition of firearms carry when citizens traveled from their homes. In modern parlance, Americans carried arms to prevent their gatherings from becoming soft targets.”

The nod to American history is linked to last week’s 6-3 Supreme Court decision that overturned New York state’s strict limitations on who can carry a gun outside their home. In the ruling in New York State Rifle & Pistol Association Inc. v. Bruen, Justice Clarence Thomas broadly implicated many other limits on carrying guns, saying that governments will now have to show that their restrictions are rooted in the country’s historic traditions, and are not simply justified by a significant government interest.

That, Lyon told DCist/WAMU earlier this week, opened up new avenues to legal challenges to D.C.’s restrictive gun laws. “I think that there is definitely some room there for litigation,” he said, hinting that some of it would come from him.

In the complaint, the four plaintiffs (all of whom already possess a valid carry license in Washington, D.C.) acknowledge that D.C. has the authority to “regulate consistent with the nation’s historical tradition of firearms regulation the manner of carrying arms, including handguns, and may prohibit certain arms in narrowly defined sensitive places,” but argues that the blanket ban on lawful concealed carry on public transport isn’t narrowly defined or confined to a truly “sensitive place”. 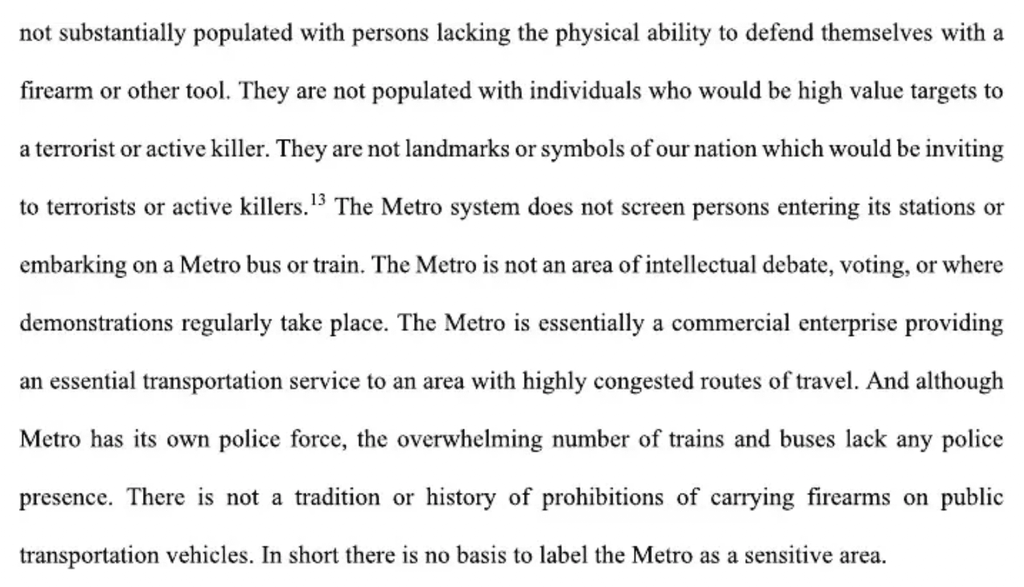 Even if the public transportation vehicles in question could be labeled “sensitive places”, the lawsuit argues that the ban has severe implications on the right of self-defense for those who have no other means of transportation and is a “substantial infringement” on their Second Amendment rights, with the practical effect of disarming all Metro riders “for the entirety of their journey.”

The Supreme Court hasn’t weighed in on the constitutionality of gun bans on public transportation, and different cities have different rules in place for riders. New York City, for instance, didn’t ban concealed concealed carry on its subway system (though that will change in a matter of days), and cities like Atlanta and Dallas also allow for lawful concealed carry while Chicago, D.C., and several other jurisdictions ban the practice. In his brief, Lyon says that he’s been “unable to find any authority to support a tradition of prohibiting the carriage of weapons on public conveyances of the time such as riverboats, ferries, trains, or stagecoaches,” and argues that there simply isn’t a tradition or history of banning arms carried for self-defense that is analogous to D.C.’s current ban on carrying on buses and trains.

You can bet that D.C. is going to fight hard to keep its current ban in place, and will probably argue both that bans on public transportation are in line with the text, history, and tradition of the Second Amendment and that even if they’re not, because the Metro system stops near multiple government buildings and other “sensitive places” in Washington, D.C. and Virginia, the entirety of the transit system should also be considered “sensitive” as well.

I don’t think that argument is going to be persuasive at the Supreme Court, but we’ll see what happens in U.S. District Court first. A fair reading of history should compel the court to strike down the ban, but if an activist judge is assigned to the case we may very well see history rewritten to try to justify the disarmament of all those who rely on public transportation.