While Joe Biden and gun control activists are celebrating the signing of the first new gun control legislation in decades at the White House today, a new poll from Pew Research shows the vast majority of Americans think the new law will have little effect on violent crime.

In fact, just 7% of respondents said they expect the new restrictions will do “a lot” to reduce “gun violence,” and more than 1/3rd of those surveyed say they don’t expect the new laws will have any positive impact whatsoever.

Despite that, Pew found that the new laws are still supported by a majority of Americans, including a plurality of Republicans.

Majorities of adults across age groups approve of the law, with about two-in-ten disapproving across all age groups. Older Americans (those ages 65 and older) are somewhat more likely to express approval of the law than are younger adults, though this difference is largely attributable to younger adults being less likely to express an opinion (for instance, 22% of adults under 30 say they are not sure, compared with just 8% of adults 65 and older).

Pew doesn’t separate independent voters into their own category, but those numbers for Republicans and GOP-leaners (which would include independents) aren’t great for Second Amendment activists. 80% approval among Democrats is to be expected, but seeing almost half of Republicans say they approve of the bill even if they don’t expect it to be of much use is a troubling sign that pro-2A forces aren’t talking to these ostensible allies in a way that resonates with them.

Pew does have slightly better news for pro-gun activists when it comes to Americans’ attitudes towards gun control and the Second Amendment in general, however. 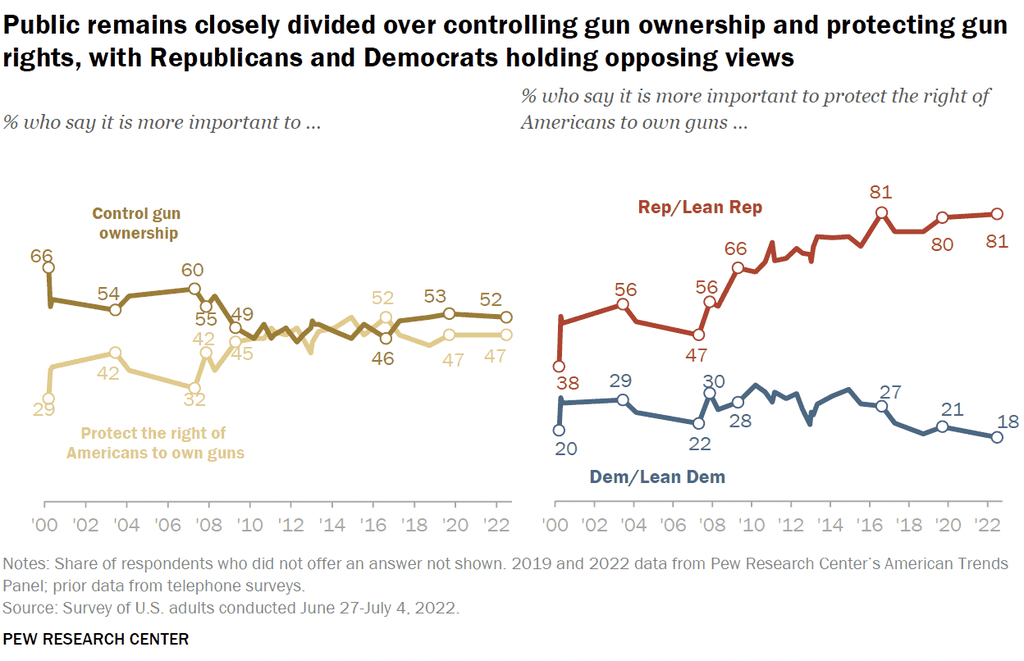 Since the turn of the century, the percentage of those Americans who say it’s more important to “control gun ownership” than protect the right to own a gun has declined by 14 points, while support for protecting our Second Amendment rights has increased by 18 points. For most of the past decade, however, we’ve basically been a 50/50 country when it comes to that question, and based on the increasing partisan split seen on the right that probably won’t be changing anytime soon, even with a fair number of Republicans expressing support for the deal signed into law by Joe Biden a couple of weeks ago.

The rise in violent crime in most U.S. cities over the past two years is undoubtably having an impact on the public polling on guns, gun control, and “gun violence,” and while Bidenflation and economic woes are by far the most pressing issues on the minds of voters this year, Republicans who’d prefer to ignore the concerns about crime and public safety are being shortsighted. That doesn’t mean they have to embrace an anti-gun agenda or even try to “compromise” on watered-down gun control legislation. It simply means they need to offer up targeted strategies that are proven to work to reduce crime without infringing on the rights of law-abiding citizens. Right now voters are mostly hearing about “solutions” that involve new restrictions on legal gun owners, but there are plenty of strategies and tactics out there that have made a real impact and could be easily replicated. Unless we do a much better job of talking about and promoting those initiatives, however, many Americans (especially non-gun owners) simply won’t know that they exist and are more likely to default to at least being open to “commonsense” and “reasonable” measures that are anything but.

Latest 'Gold Standard' Review Puts The Final Nail In The Coffin For Masks
Townhall
Jerome Adams' attempted swipe at DeSantis over 'health decisions' BACKFIRES in a most spectacular way
Twitchy
There Are Big Problems With Biden Team's Evolving Story About Prior Chinese Balloons
Redstate
Biden's Story About the Spy Balloon Doesn't Add Up; Here's What Most Likely Happened
PJ Media