Is “suitability” the new “justifiable need”? After the Supreme Court struck down New York’s “may issue” law regarding concealed carry licenses earlier this year, blue states that required applicants to demonstrate a “good cause” or “justifiable need” to carry a firearm for self defense started scrambling to come up with new ways to continue to restrict the right to carry to just a chosen few. In Massachusetts, lawmakers waited until the waning hours of this year’s legislative session before they attached new restrictions on the right to carry to a bill ostensibly designed to modernize technology in courthouses across the Commonwealth, and on Tuesday Gov. Charlie Baker signed the new requirements into law.

“The Commonwealth’s gun laws are some of the strongest in the nation, helping Massachusetts to achieve one of the lowest gun death rates in the country. This legislation takes imperative steps to ensure that our gun laws comply with the Supreme Court’s ruling in the New York State Rifle & Pistol Association, Inc. v. Bruen case,” said House Speaker Ronald J. Mariano (D-Quincy). “I’m proud that this legislation will also ensure that the Commonwealth’s court system’s virtual operations can occur more efficiently, a function that continues to be increasingly important. I want to thank my colleagues in the House, our partners in the Senate, and Governor Baker for supporting these vital changes and improvements.”

Massachusetts actually has one of the highest violent crime rates of any New England state; much higher than Constitutional Carry states like Vermont, New Hampshire, and Maine. 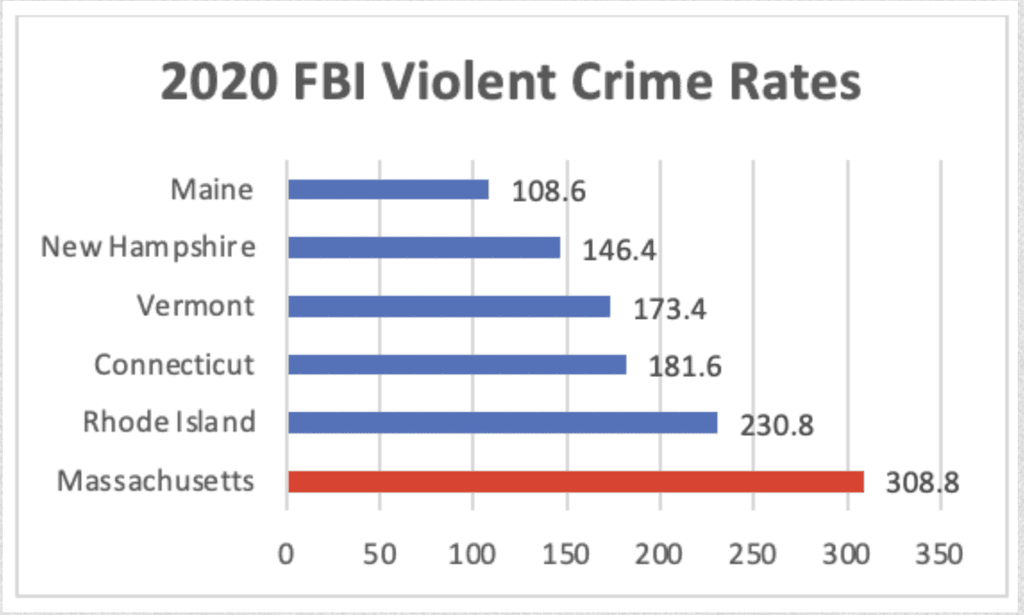 The new rules aren’t likely to stop any violent criminal from acting out, but they could very well chill the exercise of a constitutionally-protected right by continuing to allow local law enforcement to use arbitrary and subjective determinations about someone’s “suitability” to carry a firearm; something that the Gun Owners Action League in Massachusetts has been warning members about for weeks. Rather than complying with the Supreme Court’s decision, as House Speaker Mariano claims, the new law looks more like a giant middle finger to the Court and Massachusetts gun owners.

The original version of the bill included language that would bring certain aspects of the Commonwealth’s gun licensing scheme into line with the Supreme Court’s recent decision in Bruen by making licenses “shall issue”, removes the licensing authority’s ability to restrict licenses, and eliminates the licensing authority’s discretion. However, it also sought to codify the Commonwealth’s “suitability” standards-which GOAL objects to on the grounds that they are too subjective to work under Bruen. The bill also included provisions that would have cut the length a License to Carry is active from 6 years to 3 years, effectively doubling the cost of a license, and would require a license applicant, whether for a new license or renewal, to sit for an interview with the licensing authority. Thankfully the final version of the bill does not contain those two provisions.

The final version of the bill does include the elimination of restrictions and discretion. However, it does include language codifying “suitability” as well as a provision that would prohibit a person currently subject to a permanent or temporary harassment prevention order from obtaining a license to carry-a harassment order is a much lower legal standard than the usual abuse prevention order.

GOAL maintains the position that so-called suitability is unconstitutional and we are determined to keep up the fight to ensure that the licensing standard contained in Bruen is made law in the Commonwealth. There is NO REASON these provisions should have been snuck into a bill that had absolutely nothing to do with the matter, it is important that we keep our legislators accountable and vote for pro-civil rights candidates.

While I don’t dispute that it’s important to vote for candidates who respect our civil rights, the fact remains that the Massachusetts legislature is likely going to continue its hostility towards the right to keep and bear arms for the foreseeable future even if every gun owner in the state cast a ballot this November. Voting alone won’t restore the Second Amendment to its rightful place in state law, unfortunately. It’s probably going to take multiple lawsuits to before owning and carrying a firearm for self-defense is seen, however reluctantly, as a genuine right by the anti-gun politicians in charge of the state, and I hope it won’t be long before the Gun Owners Action League and other Second Amendment groups take on the state’s subjective “suitability” standards in court.