Ohio Democratic gubernatorial candidate Nan Whaley is still bitterly clinging to her anti-gun ideology as the race for governor enters the final days of campaigning. Speaking to the Cleveland Plain-Dealer editorial board on Thursday, the former mayor of Dayton accused incumbent Gov. Mike Dewine of “disrespecting” voters in the city by signing permitless carry legislation into law earlier this year; a ham-handed attempt to tie in the 2019 mass shooting in Dayton to the right of responsible gun owners to defend themselves against violent attacks.

It’s not the first time that Whaley’s done so; in fact she’s based much of her campaign around criticizing DeWine for his supposed lack of response to the shooting while signing legislation over the objections of gun control activists and anti-gun politicians like herself. On Thursday, she once again claimed that DeWine is simply afraid or a pawn of the gun lobby.

Whaley noted that when people famously called on DeWine to “do something” about gun violence following a 2019 mass shooting in Dayton, “it wasn’t about getting the database right on the warrant section. It was about real, common-sense gun-safety things like universal background checks and red-flag laws, and those are things that (DeWine) completely walked on.”

She added that DeWine “disrespected the people of Dayton” by signing bills allowing permitless concealed-carry and loosening training requirements for educators to carry concealed firearms on school grounds because “he’s afraid of the extremists and radicals in his party.”

Ohio is one of 25 permitless carry states, which is one indication that the policy Whaley objects to is considered “extreme” mostly by those who are extremely hostile to our right to keep and bear arms in the first place. What’s more, if the voters in Ohio really considered permitless carry or allowing school districts to adopt policies allowing for vetted and trained staffers to carry a concealed firearm on campus to be a radical position, we’d probably see some evidence of that in public polling in the state.

Instead, DeWine has been absolutely crushing Whaley in surveys of Ohio voters. According to the RealClearPolitics polling average of the Ohio governor’s race, DeWine is leading in polling by an average of 18.3 points. 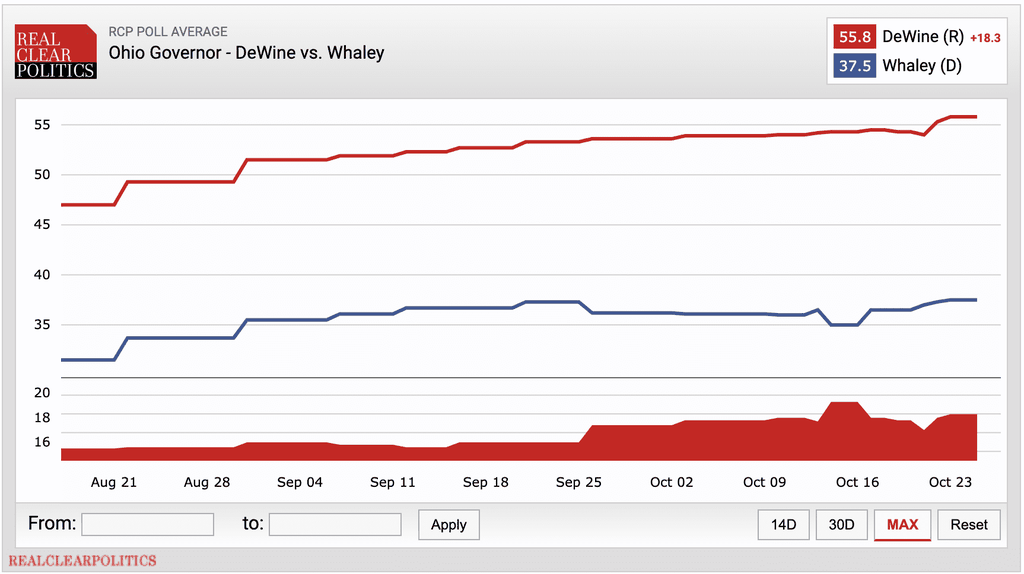 DeWine, who also spoke to the paper’s editorial board on Thursday morning, defended his signing of permitless carry and armed school staff legislation while arguing that he continues to lobby for his own “reform” measures, which have so far been given the cold shoulder by his fellow Republicans in the statehouse.

DeWine replied that while the legislature didn’t pass any of his gun-reform package (which Whaley vocally supported when he first unveiled the plan), he made unilateral moves that he thinks “have made a huge, huge difference,” including pushing for Ohio authorities to report warrants to national databases.

DeWine also noted that he has given $250 million in federal coronavirus relief funding (which he opposed the passage of) to local law enforcement. “Go talk to your local mayor. Go talk to, you know, someone who’s not running for governor about what we do,” he said.

The governor said that he has “not given up” on convincing Republican lawmakers to pass parts of his gun-reform plan to pass the “red-flag” proposal (though he disputed calling it a “red-flag” measure) and to toughen penalties for repeat violent offenders found to have guns illegally.

Increasing sentences for repeat violent offenders isn’t the controversial component of DeWine’s plan, of course. It’s the actions aimed at legal gun owners that have drawn the ire of Second Amendment organizations in the state, and rightfully so. Still, the governor hasn’t let the fact that his pet legislation has been stymied by lawmakers stand in the way of signing bills that enhance the self-defense rights of Ohioans, which helps to explain why he was able to handily fend off a primary challenge earlier this year. Since then Republicans have largely coalesced around his candidacy, with the most recent poll of Ohio’s gubernatorial and Senate races showing DeWine attracting votes from across the political spectrum; something that Republican Senate candidate J.D. Vance has struggled with in his race against Rep. Tim Ryan.

DeWine has been routinely running 10 or more points ahead of Vance in their respective races, which indicates some ticket-splitting going on, and the Cygnal survey of more than 1,800 likely voters provides some strong evidence that the governor’s attracting a lot of support from moderates, and even a healthy amount of self-described liberal men. And despite Whaley’s attempt to portray Ohio’s new gun laws as the result of “radicals” forcing DeWine to adopt extreme positions, the vast majority of voters surveyed by Cygnal don’t see gun control as a big concern.

Kitchen table issues like jobs and inflation are what’s driving this election, and Whaley has based her campaign largely around criminalizing the Second Amendment and protecting access to abortions in Ohio. The vast majority of voters are far more interested in whether or not they’re going to be able to afford their next grocery bill than a supposed need for “red flag” laws, and Whaley’s obsession with new gun control measures just isn’t connecting with their concerns… and in some cases is driving the opposition to her candidacy.

Whaley’s flailing attack on DeWine’s “disrespect” for voters isn’t going to land a serious blow to his campaign, because they don’t feel disrespected by his decision to sign permitless carry legislation. Instead, it looks like a lot of voters are feeling disrespected by Whaley; both for her unwillingness to focus on the issues most important to them and her fixation on restricting their fundamental right to self-defense.

Teen charged in connection to murder was on probation after plea deal
Nov 29, 2022

Twitter's First Transparency Reports Are Here and They're Eye-Opening
Townhall
Biden: who knew what a supply chain was? Normal people: pretty much everyone?
Twitchy
Trump's Meeting With Kanye Was Planned to 'Make Trump's Life Miserable' and the Plan Worked
Redstate
4 Reasons Police Haven't Arrested or Named a Suspect in the Idaho 4 Murders
PJ Media