It’s been more than four months since the Supreme Court struck down the “may issue” concealed carry laws in a handful of states, and since then most of those states have come up with a process removes the requirement that applicants demonstrate a “justifiable need” or “good cause” before they can legally bear arms in self-defense. To be sure, many of those states have replaced one unconstitutional standard with several others, but at least in theory its been possible for the average citizen to now obtain a carry permit.

Not so in Honolulu County, Hawaii, however. There more than 500 individuals have submitted their applications, but have been left in a legal limbo for months as county officials dawdle over making the necessary changes to their local ordinances.

During an Oct. 4 hearing, gun advocates testified that the rules are too restrictive and violate the Supreme Court’s intent that citizens be allowed to carry weapons in public for their own protection. Testifiers specifically said revisions are needed on the types of holsters allowed for various types of guns, that the type of handgun carried should not be limited as long as it is legally registered and that the requirement for annual license renewals is too frequent.

Many other people testified that they didn’t want any concealed gun permits issued despite the court’s decisions to protect the community.

Andrew Namiki Roberts, a director of the Hawaii Firearms Coalition, accused the police department of dragging its feet on the issue, saying it has had plenty of time since the hearing was held to update the rules. He pointed out the other three counties had done so.

Roberts and other gun advocates met with Logan Oct.25 to talk about the delay in issuing permits.

“There is no reason four months after a U.S. Supreme Court decision saying you have to issue permits that they haven’t been issued,” Roberts said last week. “We had a sit down with the police chief and he basically explained that they are getting rid of some small, minute parts, but almost all of the policy they originally wanted is going to stay in place.”

Roberts said lawsuits are already being planned to challenge Hawaii’s proposed rules if they go into effect as currently written.

“We sat down to explain to the chief that the current policy and the changes they plan to make are not going to hold water,” Roberts said. “Issuing permits to people that have already applied for their licenses is the biggest thing he could do to avoid a lawsuit.”

For his part, the Honolulu police chief says he would have liked to have submitted those changes to the mayor a month ago, but “there are certain things out of my control.”

That may be the case, but there simply no excuse for the lengthy delays, especially given the historical hostility towards the right to keep and bear arms on the part of Hawaiian lawmakers. It’s long past time that the state and its political subdivisions recognize that right and its fundamental importance, but instead Honolulu politicians are continuing to play games with the civil rights of residents.

One reason for the delay may be that the county officials are hoping to stall the issuance of any carry licenses until the state legislature weighs in with its own anti-gun response to the Bruen decision.

State Sen. Karl Rhoads, chair of the Senate Judiciary Committee, said he is drafting a bill to define state law on concealed carry weapons and sensitive areas where guns should be restricted.

Rhoads said the bill would likely not limit the counties from adding requirements of their own to gun permits.

“I’m aware that the Second Amendment is being interpreted much more broadly than it has ever been interpreted before,” said Rhoads. “The weight of the evidence at this point is that more guns result in more deaths. If I thought that everybody carrying a gun would make people safer I would support it. I don’t have anything intrinsically against guns. I just don’t think the data is there.”

If more guns equaled more deaths then the homicide rate in the United States would rise year after year. Instead, as crime trends show, the rate of homicides rose sharply throughout the 1960s and early 70s, then largely plateaued until the early 1990s when it fell substantially. The decline largely continued right up until 2020, when the murder rate spiked by 30%. If more guns led to more crime, the graph below would show a steady and sustained increase year after year instead of the peaks and valleys that reflect the ever-changing homicide rate. 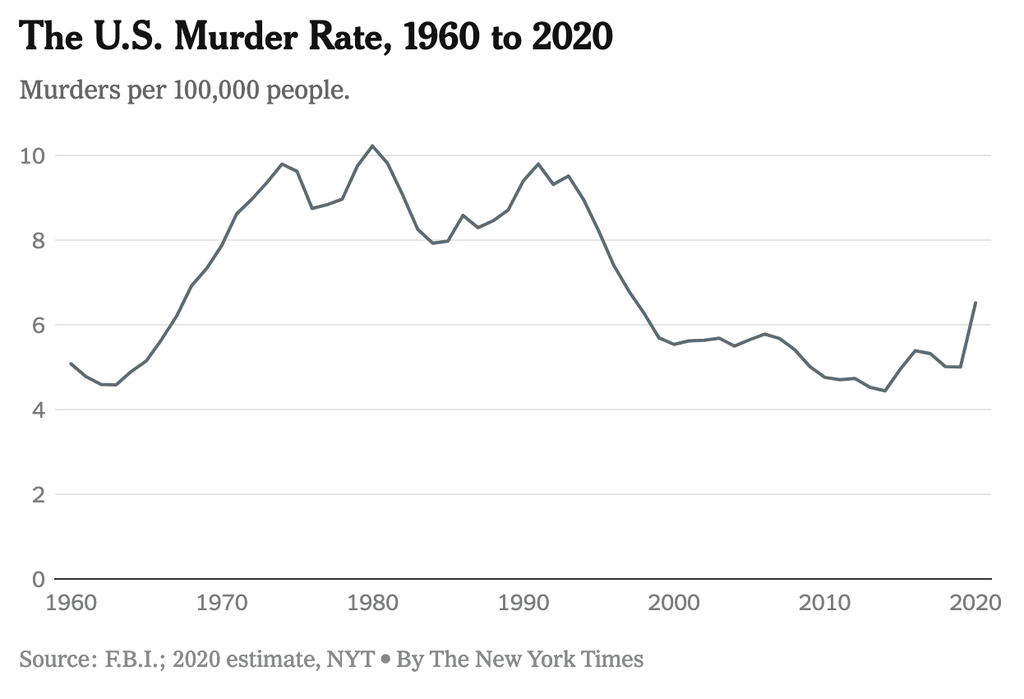 Rhoads and his anti-gun allies in the Hawaii legislature believe that their constituents need to be protected from themselves; that recognizing the right to keep and bear arms in self-defense will lead to trouble in paradise. Unfortunately, it’s likely going to take a lawsuit to bring their authoritarian impulses to heel, and in the meantime the rights of every single law-abiding resident in Hawaii are being tread upon to one degree or another, with the residents of Honolulu County bearing the biggest burden thanks to their elected officials inaction.

I wish Roberts and the Hawaii Firearms Coalition the best of luck in their upcoming legal challenge, but it’s an absolute travesty that the courts are going to have to compel these officials to concede that the Second Amendment protects a real right in the first place.

Teen charged in connection to murder was on probation after plea deal
Nov 29, 2022

Twitter's First Transparency Reports Are Here and They're Eye-Opening
Townhall
Biden: who knew what a supply chain was? Normal people: pretty much everyone?
Twitchy
Trump's Meeting With Kanye Was Planned to 'Make Trump's Life Miserable' and the Plan Worked
Redstate
4 Reasons Police Haven't Arrested or Named a Suspect in the Idaho 4 Murders
PJ Media