Democrats in rural Virginia county rebrand themselves as 2A champions, but there's one big problem

Washington County, Virginia is a long way from the endless suburbs and deep-blue politics of northern Virginia and the D.C. suburbs; both in terms of geography and the dominant political point of view. And with rural Virginia turning a ruby shade of red in recent elections, Democrats in the southwestern county not far from the border town of Bristol are looking to rebrand themselves as champions of the Second Amendment and encouraging the party to adopt a “big tent” mentality with room for gun owners and those who don’t believe that criminalizing a constitutionally-protected right is a viable strategy in terms of public safety or political gain.

The move was the idea of committee Chair Susan Stancill, who said Thursday the state and national Democratic Party can’t connect with rural, working-class voters largely because of their failure to understand the importance of the Second Amendment to voters.

She said she was inspired by the book “Deer Hunting with Jesus, Dispatches from America’s Class War.” Written by Joe Bageant, it is about the author’s return to his hometown of Winchester, Virginia, and the income inequality and problems facing the working poor there.

“When I read it, it was an epiphany for me. It just gave me a validation of an insight that I thought I couldn’t have as an outsider. … It congealed everything that I’ve learned in my political experience with all these campaigns and traveling around the 9th District into a realization that one size of Democrat doesn’t fit and if we’re the big tent party, we’re going to have to make room for rural Democrats who are responsible gun owners,” said Stancill, who leads regular discussions on the book.

During a news conference at the Southwest Virginia Cultural Center and Marketplace in Abingdon, Stancill said rural voters are being underserved by Democrats and Republicans.

For rural residents of Southwest Virginia, guns are a unifying, cultural tradition that are often passed down from generation to generation, she said. Gun safety is taught at an early age and rural gun enthusiasts are responsible gun owners, Stancill added. constitutional rights.”“that the Bill of Rights and all other rights conferred by the Constitution must be taken as a whole. It is not a menu that one can order from based on personal taste or belief. That means the protections conferred by the Second Amendment are co-equal with the protections conferred by the First Amendment and all other constitutional rights.”

Look, I think it’s great that Stancill and other Washington County Democrats say the state and national party should quit demonizing law-abiding gun owners. The county committee’s statement that “the Bill of Rights and all other rights conferred by the Constitution must be taken as a whole” and “the protections conferred by the Second Amendment are co-equal with the protections conferred by the First Amendment and all other constitutional rights” should be applauded, even if I think it shouldn’t take reading a book from 2007 to start to see your Second Amendment-supporing neighbors for who they actually are rather than the cartoonish villains the gun control lobby makes us out to be.

But actions speak louder than words. What good is a press conference blasting the Democratic establishment for ignoring rural voters and gun owners if you turn around and endorse an anti-gun establishment Democrat’s campaign for another six year term as a U.S. Senator, as the Washington County Democratic Committee did last week? 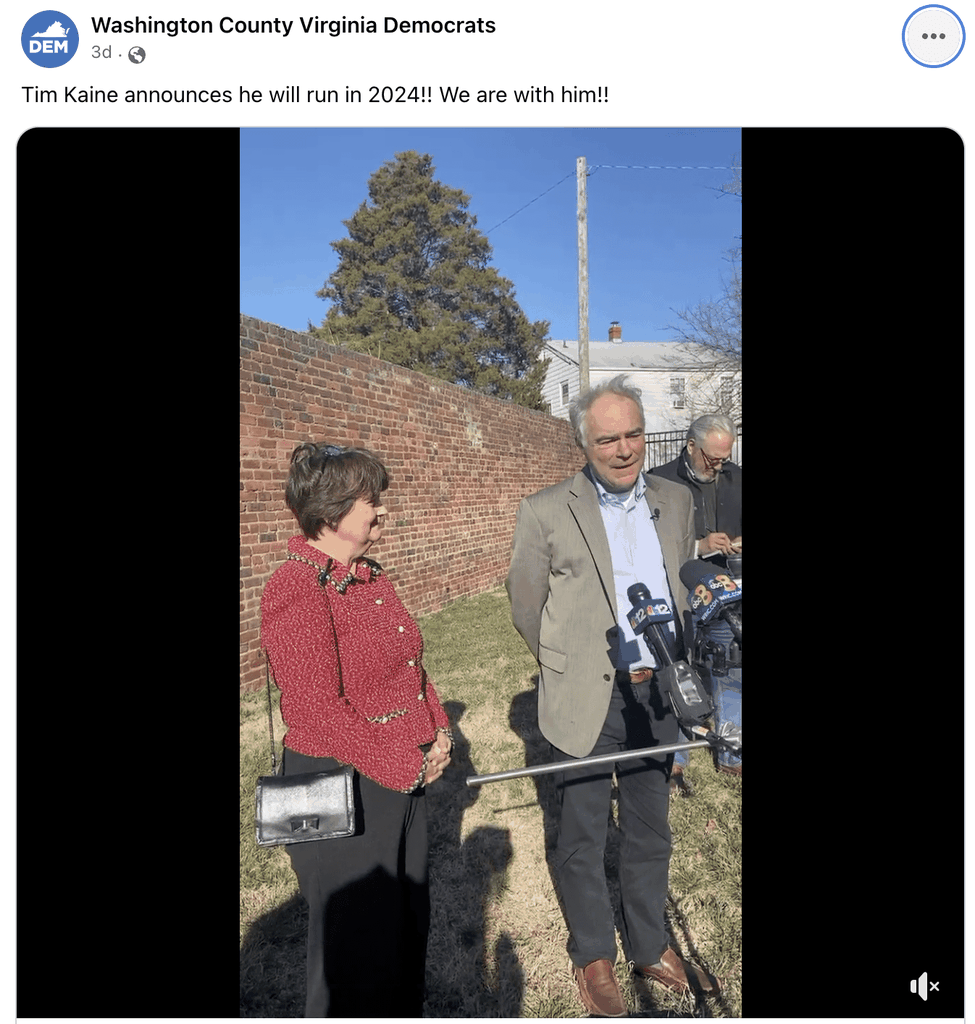 You can’t really complain about the status quo while fighting to keep it in place, at least not if you’re hoping to persuade pro-2A voters to side with the party trying to turn them into a criminal for exercising their right to keep and bear arms. I understand you have to start local, but a commitment to supporting the Second Amendment means challenging guys like Tim Kaine over their support for gun control, not breathlessly greeting his re-election announcement.

The biggest problem for rural, pro-gun Democrats is that their suburban and urban counterparts are still very much committed to destroying the Second Amendment and legal gun ownership. In fact, earlier today the Democrat-controlled Senate Judiciary Committee in Richmond advanced a number of anti-gun bills that, while likely to die in the state House, demonstrate the contempt that the overall party has for our fundamental right to armed self-defense.

SB1382 as amended reported from Senate Judiciary 9-6 and rereferred to Finance. Bill would prohibit the future sale of modern sporting rifles and magazines as defined by the bill, which includes semi automatic shotguns.

SB 1139 requires anyone with firearms in a residence with a minor under 18 years of age, to store them unloaded in locked containers, and store ammunition in separate locked containers. Loaded firearms may only be stored in “biometric storage device[s].” Substitute reported 9-6

Senate Bill 1181, a bill that essentially ends the practice of building firearms for personal use by restricting components commonly used by hobbyists to make their own firearms far beyond what federal law requires reported from Senate Judiciary 9-6 and rereported to Finance.

Every seat in the Virginia Senate is up for grabs this November, which theoretically should serve to moderate the Democrats’ anti-gun ambitions (along with the fact that Republicans control the state House of Delegates and governor’s office), but there’s no sign of any moderation or middle ground in the anti-gun bills that were approved in committee today. Virginia Democrats, at least the ones in office, are taking their marching orders from the national party and the gun control lobby… and rural Democrats are going to need to do a lot more than hold a press conference if they want to persuade gun owners to give them a chance come November. If they’re not willing to challenge the party establishment, then rural Virginians will be voting Republican in lopsided numbers once again, and Democrats may find themselves completely out of power in a state they once assured themselves was trending blue forevermore.