When an author releases a new title it is a celebratory event. After putting in the time and effort, the days leading up to and of release of show the fruits of hard labor. With six other titles under his belt, author and Second Amendment advocate Yehuda Remer, also known as “The Pew Pew Jew”, on May 2nd released his seventh: 10 Little Gun Grabbers. What is 10 Little Gun Grabbers all about? From the Amazon description:

Watch what happens as those pesky Gun Grabbers are confronted by pro-Second Amendment ideas. Humor follows each page as the reality of everyday gun life throws a curve ball into the gun grabbers nefarious intentions.

I have not personally had a chance to review Remer’s book, but have added it to my “save for later list”. All indications point to it delivering some great tongue and cheek commentary about the political climate of today’s America. One reviewer gave the book five stars and had this to say:

This book is a satirical look into modern American 2A politics. The cartoons are drawn nicely, the suessian rhyming poems are simply stated but convey the story well. I assume some people may not like this book based on its content, and being intellectually dishonest may give 1 star reviews. This book portrays satirically the experience of many people and should not be disregarded out of hand.

The problem that Remer is having is promoting the book. In 2021 social media plays a very important role in getting the word out about new products. Social media gives authors, artists, and businesses an opportunity to connect directly with their intended audience. Instead of being able to put his content out to spread the word, Remer has been stone walled by constant notification that his posts go against community standards for violating the polices on weapons. The funny thing about Remer’s branding is, all he sells are his books and other apparel. Looking even through his webpage for the goods he sells, there are no firearms, firearms accessories, or anything menacing that would trigger the sensitive eyes of the electronic overlords. T-shirts, books, hoodies, two items that are branded as Tactical Yarmulke/Kippah, etc. are what he peddles. 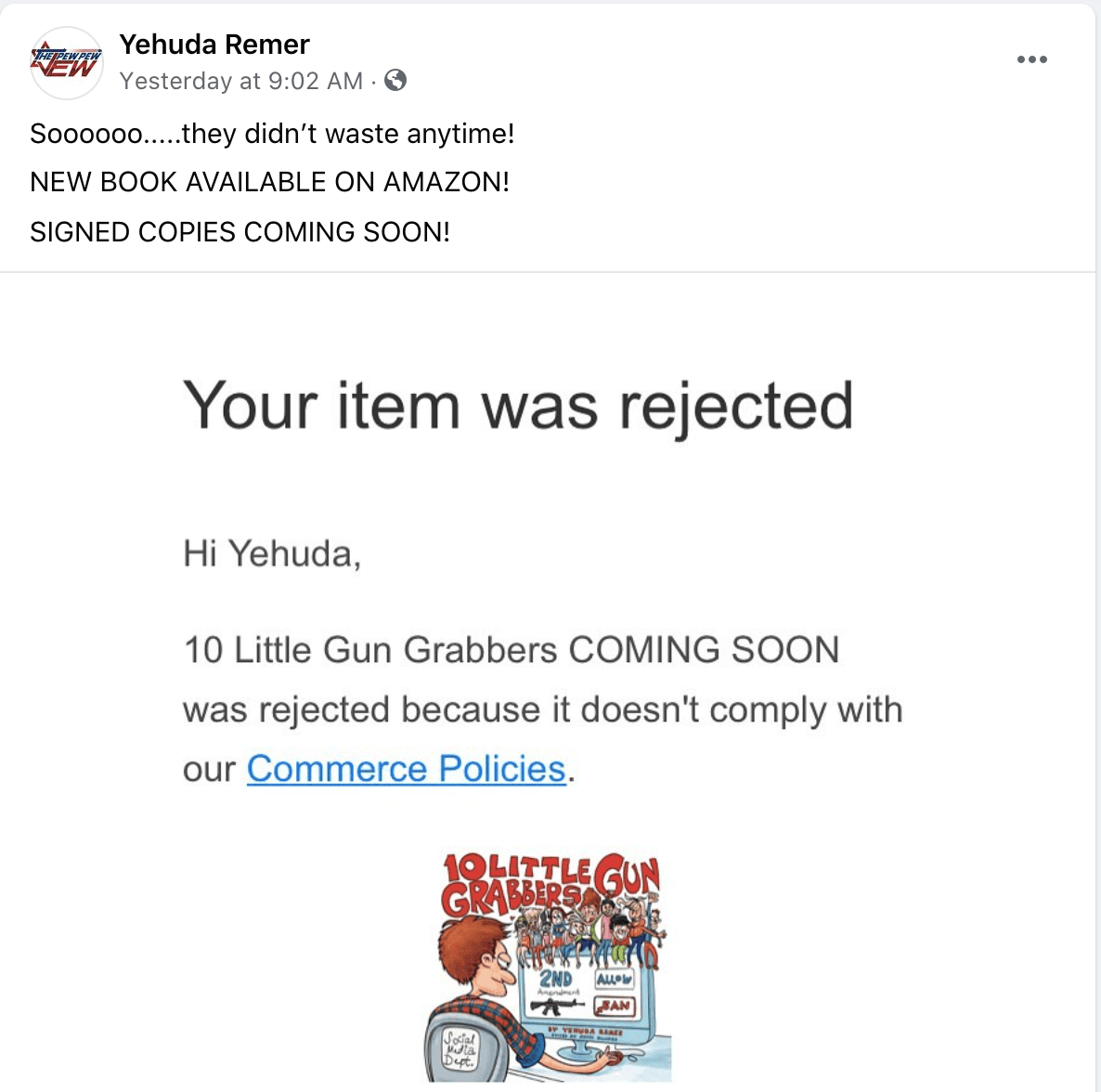 The situation revolving around this gross act of cancel culture is so awful that one follower of Remer’s work was not even able to comment on a post that did make it past the cutting room floor.

I think it’s safe to say that we have now passed over the line of what is acceptable, at least this is so blatant and obvious. Books. We’re discussing a book. A book that pokes fun at exactly what is happening in our current politics. At what point are the actions of big tech is doing considered illegal? The censorship and modern day book-burning needs to come to an end eventually. Unfortunately for Remer and other author/advocates like him, they have an uphill battle to not only get their messages out there but also try to promote their work. According to Remer, this is not the first time he’s had this challenge.  This is what he had to say when I talked to him about the current situation:

So I have tons of stuff I can’t sell. It would take me days to go through everything and request reviews. Including my gun safety book, and even things with my logo. You can look through my website and see I sell nothing like firearms, accessories, or anything like that.

I want to take this opportunity to wish Yehuda the best of luck on this book and his continued endeavors. Voices like his play a very important role in today’s world and when being up against a very anti-freedom and anti-civil rights minded corporate culture, it shows why determination to never give up must be adopted. Remer faced obstacles all through his career as a writer, with one notable story about his first book, Safety On, being canceled while in the middle of finalizing production. Thankfully he did not fold. I doubt these speed bumps will slow Yehuda, his dedication to the Second Amendment and education is unwavering. These trials are part of a much larger and scarier issue revolving around the woke rage mob of cancel culture. In today’s society we ought to be reading books rather than banning them.