Our brethren on the other side of the pond have dealt with disarmament for many years, and a recent knife amnesty program out of the UK tells us all we need to know about the movement in Britain’s former colonies to disarm American citizens.

First, we should take a chance to applaud the UK for calling the program an “amnesty” program. Much like our friends down under in Australia, they don’t mince words. Whereas in the United States, the government officials are so full of hubris that they call similar programs “buy backs”. To be fair, the amnesty programs that are offered up to our relatives who still are under the thumb of the crown don’t always offer up a subsidy or “prize money” for their turn-in events. I suppose that Americans are not so easily coerced to give up their property without getting some compensation. Over here in the free world we could more appropriately refer to these “look I’m doing something” events as compensated confiscations.

The Burnley and Padiham Police department which is situated in Lancashire, UK enthusiastically posted about a knife amnesty program on July 2nd involving the emptying of one of their drop boxes for these dangerous goods. The UK has done all they could to get firearms out of the hands of the law abiding citizens and have moved on to knifes. From their post:

We have emptied the town centre knife amnesty bin, recovering 87x knives, 3x screwdrivers, a hand full of spoons and forks and a collection of other household items.

This is a significant amount of items which could have been used in knife crimes.

We appreciate some of these items aren’t necessarily dangerous but it’s the intent of the user which makes said items dangerous. 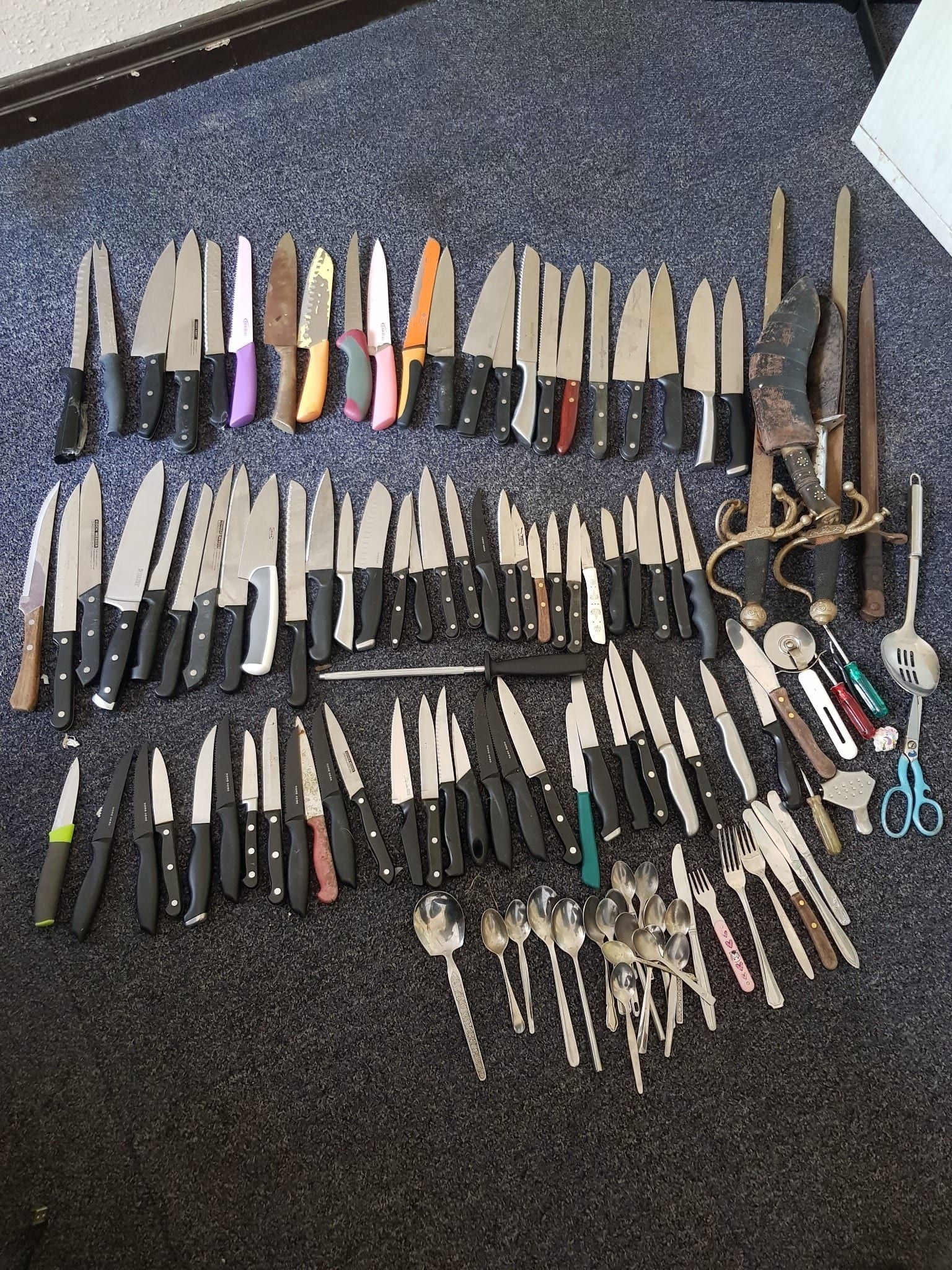 Bravo! Now isn’t that quite the haul of booty. This would be the perfect time for the leadership over there to create and adopt a sous-chef program where disadvantaged cooks can be gifted reconditioned cutlery, spatulas, flatware, and cooking knives. Not only would this create jobs in the way of having professional knife and flat wear smiths preform the heroic deed of reconditioning the goods, but will also give the less fortunate a chance to succeed in their trade. Who knows, maybe the next top chef can compete on one of those television programs. Think of the pride, even if one of these chefs that benefits from the program loses, that the UK can have. Those ominous words “pack up your knives” can be a beacon of hope knowing those were discarded weapons the UK paid to supply someone in need.

This is where we are in the world today. Knife trade-in boxes and police departments celebrating a box of items that are fit for an American flea market table. They did their best to get rid of the guns in England (which they failed at mind you) and have moved onto kitchen knives. Looking at the picture I don’t see any prominently displayed switch-blades, dirks, daggers, or narwhal tusks. There seems to be a nice set of utility shears, a few old bayonets, and one lonely pizza cutter among the chef knives.  Burnley and Padiham Police department, we thank you for taking these wicked kitchen gadgets off the streets! Clink a couple of pints of draught at the pub, you deserve it. Tally-ho!

The progressive anti-gun mentality is a losing race. After gun control comes knife control. In this case, slotted spoon, screwdriver, and pizza cutter control. From the beginning of time nearly all cultures have accepted that thou shall not murder and thou shall not steal. Yet, here we are with violent crime, murder, theft, and rape. What often gets forgotten is the weapon is the mind of the actor, not what they have in their hands. It’s going to take more than one spoon full of sugar to make this medicine go down. Once the UK institutes a kitchen knife permitting program and registry, what’s going to be next? Establishing the DSPC, The Department of Screwdrivers and Pizza Cutters? I jest, but after seeing these pictures, I also wouldn’t be surprised.