Shoddy Reporting And A Beautiful Gift

I remember back in the 90’s when I was in Middle School, to date myself a little, and a schoolmate was bragging to me about his dad. My buddy was talking about how his dad knew how to turn a Glock pistol into a fully automatic gun. In fact, he said it was so easy that he could modify the firearm himself. The Glock 17 model was first made available in the United States in 1986. That was less than a decade for the pistol to arrive on the shores of the Free World and for kids to be bragging about their dad’s abilities to convert the pistols to fully automatic. Now, I don’t know if this kid was just talking out of his posterior for some sort of street cred, but we do know this conversion is quite possible and easy to achieve. Things like Glock switches and auto-sears have been around for long enough, with both items being able to convert Glocks and other firearms respectively into a fully automatic firearm. Both items being illegal without the proper paperwork from Uncle Sam.

This brings into focus a recent report talking about so-called “gun violence” and how certain items have caused more carnage. The title is worth a repeat; “Illegal gun modification devices proliferate, resulting in more deadly rounds in Minneapolis” by Libor Jany of the Star Tribune.

Four people were injured when a gunman leaned out of a passing SUV and sprayed the area with what sounded like an automatic weapon — a theory confirmed by witness testimonies and the ShotSpotter.

The incident last Tuesday extended a string of shootings involving ordinary handguns and rifles that were modified into fully automatic weapons capable of firing up to 1,200 rounds per minute.

The conversion process involves illegal devices commonly referred to as “Glock switches” or “auto-sears,” which are readily available to buy on the internet or can be made on 3-D printers. Police and crime prevention workers say that these converted guns are showing up at more and more crime scenes.

ShotSpotter was being discussed and maybe we should discount some of these claims, as ShotSpotter has been scrutinized a little in the past as being potentially inaccurate. Given the statement that ShotSpotter allegedly did not go through a correct or proper review process, we’ll flat out ignore that line. The “Glock switches” are nothing new and have been around for a long time. The ATF has deemed them “machine guns” due to their ability to convert a Glock into a fully automatic. Where things start to get conflated with the reporting is that Jany is lumping “Glock switches” and “auto-sears” into the same category while continuing to note that they “are readily available to buy on the internet or can be made on 3-D printers.”

The devices often are purchased online from companies in China and shipped under innocuous-sounding labels. This was the case in 2019 when customs officials in Chicago intercepted a suspicious package from a Beijing address that was bound for an apartment building in Woodbury, court records show. Authorities found two fully automatic trigger sear devices in the package, which was sent to federal agents in Minnesota. Agents arranged for a U.S. postal inspector to deliver the package to a man at the address. It wasn’t immediately clear whether charges were filed.

We can’t peg for sure if there is some fancy wording going on here or just ignorance of the subject. It’s clear that Jany learned these items are mostly purchased online and to toss in the bit about 3-D printing the items does work for great scare tactics. Ghost parts!  Digging through prosecution documents that the ATF has available, most of the “Glock switches” I read about were being imported. I say “most” because I did not read of any being manufactured in the United States, even though we can be sure that does happen.

This was not the first instance of “fully automatic” firearms being used that were modified in the city. Allegedly.

That same month, police said a modified fully automatic pistol was used in a shootout on a busy Uptown street in which more than 100 shots were fired and seven people were wounded.

Click on the link for the story citing the claim. I did. Nowhere in the story was it noted that a “fully automatic pistol” was used in the shootout. Nor did the story indicate that “more than 100 shots were fired.” Could that have been the case in that situation? Sure. We should probably just ignore that statement entirely as the the cited resource does not collaborate the cited “facts.” What the heck kind of awful resource citing is that?

No report on “gun violence” would not be complete in 2021 unless the reporter noted the current Holy Grail for the anti-freedom caucus to swoon over:

The increase in such incidents coincides with other worrying trends, officials say, including the growing number of shootings with fully automatic rifles and so-called “ghost guns,” which can be assembled at home from parts bought on the internet — making them untraceable.

The shoddy reporting is not really what made me fall in love with this story. Actually, I was not keen on discussing this piece, as it just seemed like more scare tactics from MSM, which is getting pretty boring. What came to us was a gift from probably the editorial staff. Let’s take a look at this screenshot from the article. 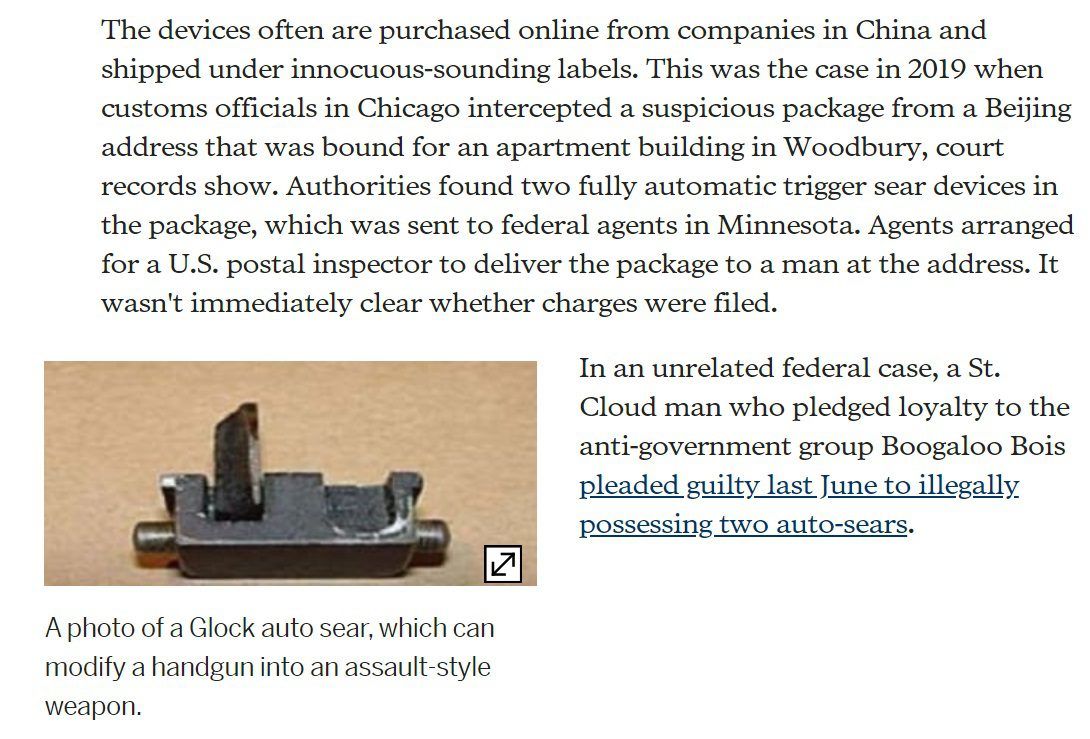 Notice anything interesting there? If not that’s okay. Clicking on the image blows it and its description up. 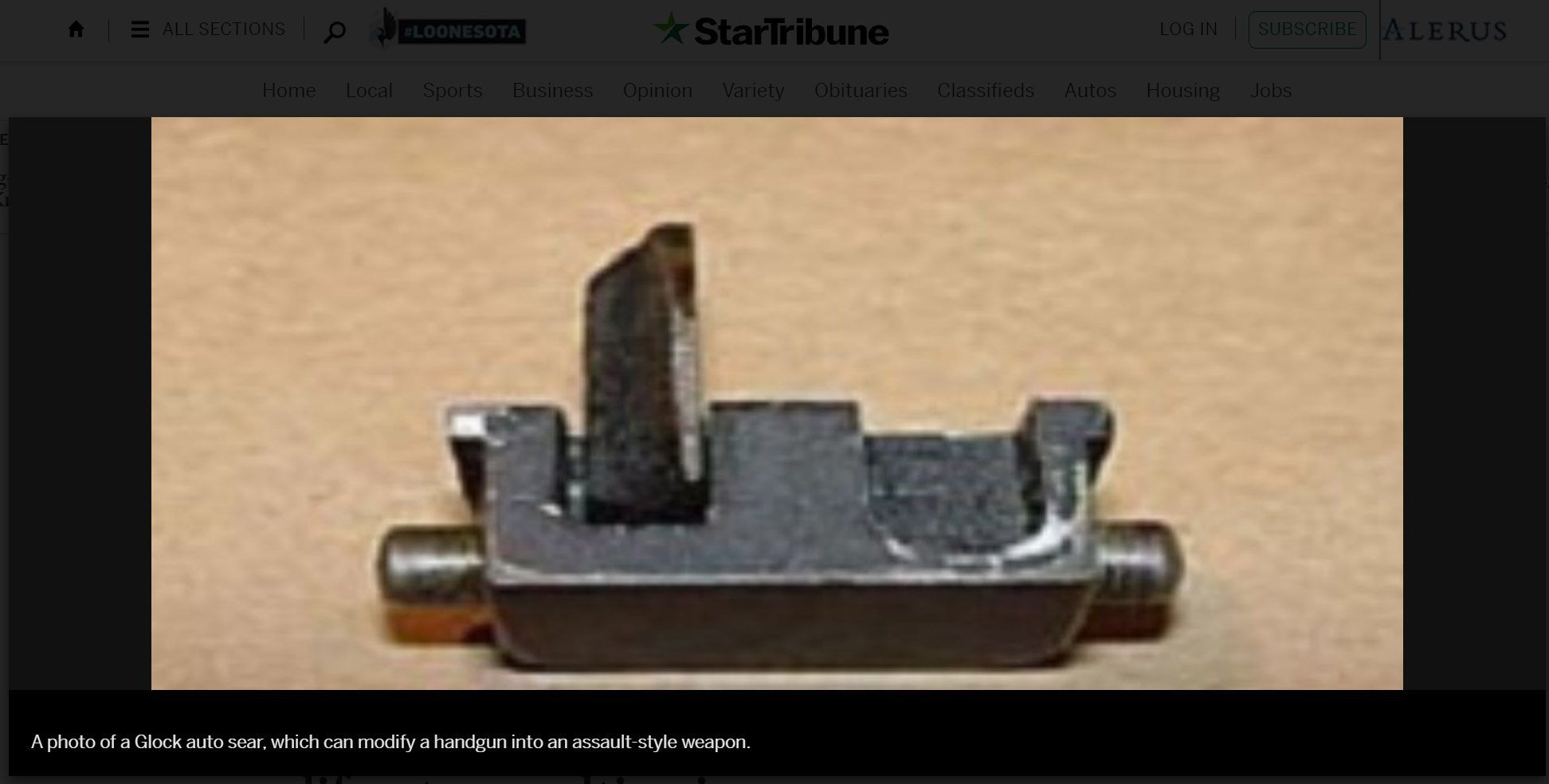 There you have it folks. This is an “assault-style weapon.” Now we can all be confused. I thought that semi-automatic rifles that only fired one shot at a time were “assault-style” or “assault-rifles” or “assault-weapons”. No? How can it be that a device that makes a pistol fully automatic be equated to assault-style at the same time as a semi-automatic rifle being assault-style? Very simple. The media has been playing hypnotic word games with the public and this proves it. The caption should read “fully automatic.” That would not help in linking the fully automatic pistol to our AR variant rifles and firearms. Or what were the other terms, “military style” or “military grade” or “weapons of war.” All of it complete and utter bovine excrement.

Shame, shame, shame, on you Star Tribune. We can all see what you did there and it’s doubtful it was a mistake. With that, I’d like to extend my deepest appreciation for both this shoddy mincing of words in the article and for the gift of nuance in language. Unbiased and inaccurate reporting will eventually bite the anti-freedom caucus in the behind…if their other scandals don’t first.

As for the crime in Minneapolis? They don’t need special devices or “illegal gun modifications” for the crime rate to be high. They’ve been doing quite well at being violent before these items allegedly became more available. When are the lawmakers and executives going to figure out that the firearms are not the problem, but the criminals?