The ATF offers up steel bracelets in celebration of V-day

While I was doing a little early morning scrolling through social media posts I ran across this Valentines Day message from the ATF.

I remember seeing all these posts a few weeks ago about the ATF being at the annual SHOT show and how commenters noted they’re always there. It’s not like it was some sort of new push to bring themselves into relevance or gain the trust of the firearm industry. Frankly, we have to deal with the ATF. Today’s post though, who knows the full motivations other than exactly what they claim. 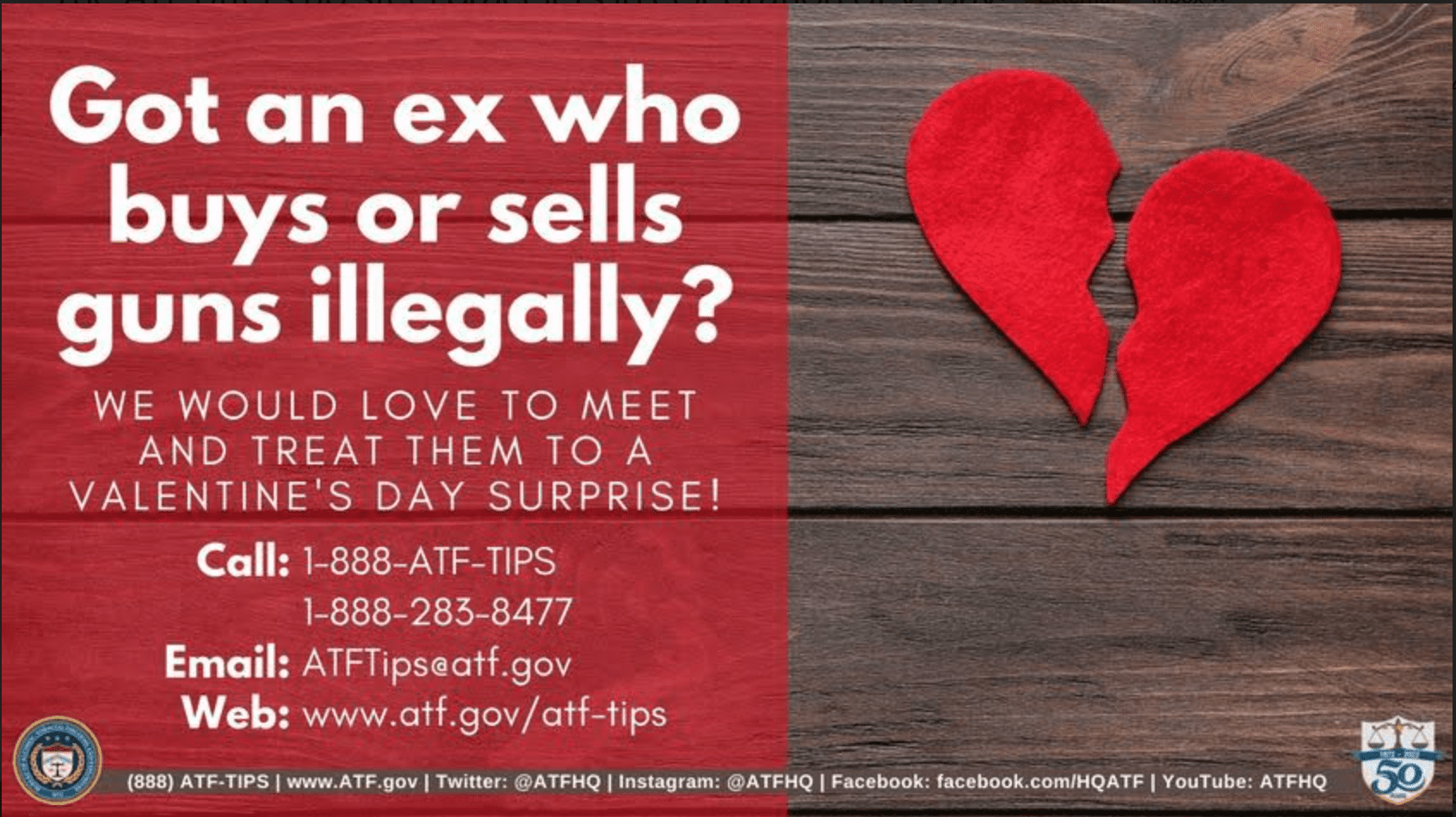 Wow. Just wow is what I thought when I read that. The first comment that came up was from the renowned firearm trainer, instructor, and owner of Active Self Protection, John Correia. Correia summed up my reaction quite well:

This is just the most tone deaf thing I have ever heard.

Correia was not the only one to see the tone deaf nature of the post. Within the first hour of posting, the ATF received well over 106 comments, with many being deleted or hidden, because the count has gone down since I last checked, and over 127 shares. The most parroted comment has to do with the ATF making the exact argument against so-called red flag laws.

Having a governmental agency go out of its way to encourage people to enact revenge on a former intimate partner because it’ll still be “fun” should be criminal. I’d be interested to see if an investigation comes to pass from this post that asks people to turn in another individual just because they’re scorned. The sad fact is this is exactly how red flag laws and restraining orders are abused. That type of abuse takes away from legitimate victims of crime and, rightfully so, brings opposition from the gun owning community on such topics.

I’d like to take this opportunity to wish the ATF a very happy Valentines Day and hope that no one reports on their failures; failures which were also quite front and center in the comment section of the post seeking to outfit as many people with brand new steel bracelets. This good wish message I’m sending comes with a hearty congratulations for further alienating the population of people they claim to not be “after”.

Personally, I’ve never given much thought to calls for the abolishment of the ATF. I’d usually meet such demands with “meh”, but honestly, the more time that goes on, the more the dismantling or at least restructuring of the organization seems necessary to me. They have to change and or go. Honestly, what special thing does the ATF do that other agencies or state agencies can’t do? Go after those rogue gun dealers that made clerical errors in their onerous and ridiculous paperwork? Big kudos to the ATF for catching those bad acting gun dealers that make a spelling or transcription error.

There are a number of Republicans in Congress who are already quizzing the ATF about some of their questionable practices. Hopefully they’ll take an interest in the agency’s Valentines Day message too. It may not be as big a deal as compiling almost a billion firearm transaction records in a searchable database, but it’s still an issue that should be called out publicly.