The New Jersey social media rooms and groups have been buzzing about who’s submitting their paperwork for their permits to carry, who’s getting success, and who seems to be getting stonewalled. We knew going into this that a victory in NYSRPA v. Bruen was not the end of all the work to be done, but in essence the beginning. Hoping that the courts will respect the opinion more than the Heller and McDonald opinions were, litigation is still moving along on several fronts. But what about relief for those that were mid-suit with draconian jurisdictions? Take New Jersey for example, a state where several, at least four that I know of, carry related cases were pending while NYSRPA was making waves. One case in particular had a chance to take a bite at the apple recently, Francisco v. Cooke, a Firearms Policy Coalition supported case.

I had a chance to catch up with Daniel Francisco, one of the plaintiffs in the lawsuit, and he had some, what we thought at the time was promising news. While Francisco’s news was not all the relief he sought, it was something, and then turned out to be just an insult.

Back in March the Francisco case was ordered stayed pending the outcome in NYSRPA v. Bruen. On July 25th Franciso’s representative wrote to the court requesting the stay be lifted. As part of the process for Francisco’s case to continue on, his injury claims were reviewed, and the matter of his carry permit denial was in essence remanded back to the Monmouth County Court for him to be issued his permit to carry.

What’s interesting about this situation is that there has been no reporting that I’ve been made aware of that the Monmouth County Court has issued any post NYSRPA v. Bruen carry permits. There might be some, I’ve just not seen them or heard of them. In New Jersey, a judge gives permits to carry a thumbs up or down after the local or state police process the applications. Plenty of other counties in the state have been issuing out permits, just seems like Monmouth has not. In retrospect, perhaps the county was waiting on getting through Francisco’s permit to carry case first?  They were directed by a higher court to do so. Maybe that backlog of applications will be swiftly taken care of?

The whole matter of an applicant having to be heard by a judge and have a prosecutor argue against them is absurd to begin with. With “justifiable need”, New Jersey’s “good cause” requirement removed from the equation by directive of the Attorney General, the court being involved is even more ridiculous. This case really cements that too.

Francisco said to me that during the August 19th hearing the subject of what firearm he’ll be “allowed” to carry came up. Permits to carry can be restricted to a specific serialized firearm. The prosecutor read the law to the letter to the presiding judge when issuing their recommendation:

When Francisco was called back to the court for him to receive the judge’s opinion on August 25th, the judge ordered that Francisco was to be issued his permit to carry. The judge did however stipulate that he was to be restricted to carrying only the one firearm he qualified with, even after the prosecutor’s statement to the contrary. While judges do have the ability to exercise such power, should they?

Francisco is the first person that I’ve heard of being “issued” (if we want to call it that) a permit to carry in Monmouth County since the opinion came down from the High Court, and I’m sure there are going to be many more to follow in the upcoming days.

Ironically, when Francisco returned to the court the following day to pick up his permit, it was not ready, and he was told to return to pick it up in future. According to Francisco, on Tuesday August 30th, through the chief of police of his town, he was given his permit to carry along with a court order stipulating restrictions. Should be open and shut, right? Just limiting him to the 92FS he qualified with? That’s not the case. 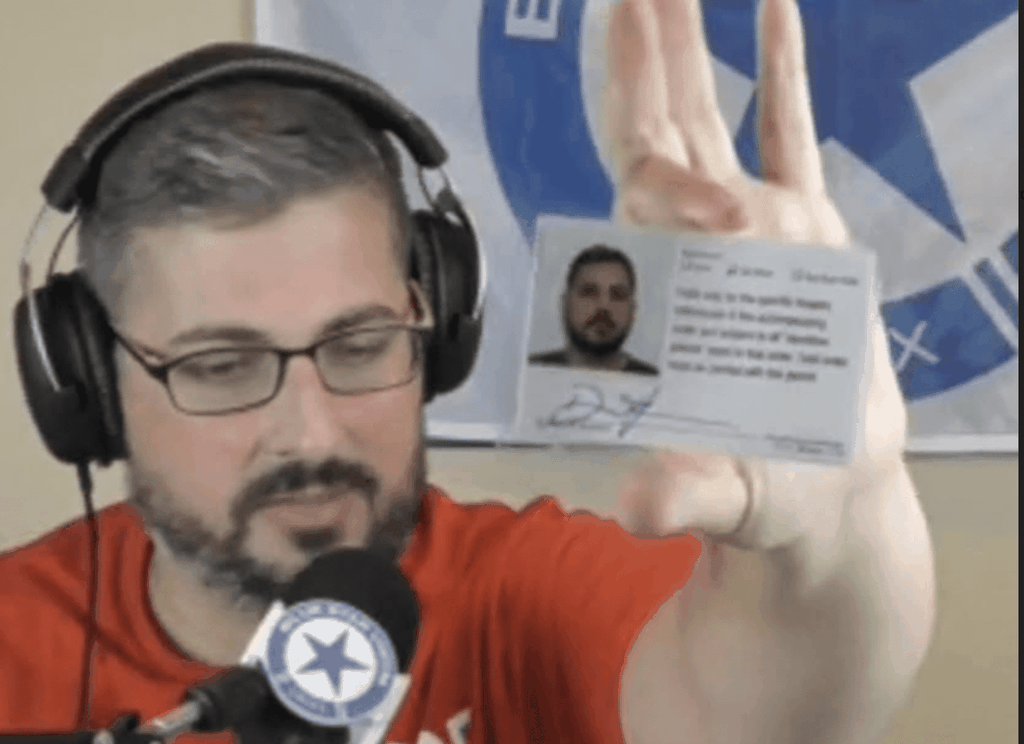 I chatted with Francisco in a followup call and he told me that the court order greatly limits where he’s allowed to carry his firearm. One of the stipulations was that he cannot carry while in a motor vehicle, and that the firearm must be stored in the vehicle as if it were being transported under exemption of the carry laws. The pistol must be unloaded and locked in the trunk of his car. Strange enough, the order states that explicitly, while NJ law does not require someone to lock their handgun in the trunk of their car if transporting under exemption. The permit actually restricts Francisco more than the exemption does.

Further, what’s the expectation? Francisco supposed to get out of his car, go to the trunk, pull out his pistol, load it, holster it, and go on his merry way when at his destination? How many over-caffeinated Karens are going to go bananas in the Garden State when they see that?

I did not get a chance to look at the court order in full that Francisco was given but he listed out some of the places that are no-go for him in a video he did about the “issuance” of his permit:

The typical Federal buildings and places already banned by state or federal law.

Shopping malls, if restricted by that entity.

Private property, if restricted by that business or entity.

Bars and nightclubs, locations with alcohol.

Places where on premises there is cannabis consumption.

While operating or riding as a passenger in a motor vehicle.

The order further states that he shall carry both his permit to carry and the court order in order to be in compliance with the law when carrying…wherever it is he can carry.

Reading those stipulations, in conjunction with the exact manner he’s supposed to transport his firearm, Francisco’s permit grants him less possession ability than the exemptions of the law.

g. Any weapon being transported under paragraph (2) of subsection b., subsection e., or paragraph (1) or (3) of subsection f. of this section shall be carried unloaded and contained in a closed and fastened case, gunbox, securely tied package, or locked in the trunk of the automobile in which it is being transported, and in the course of travel shall include only deviations as are reasonably necessary under the circumstances.

Would this also restrict him as to where he can go with his firearm since there’s a reasonable deviation clause in play? The point of having a permit to carry is to eliminate all of this nonsense.

I did learn of a similar court order that was allegedly issued out in neighboring Ocean County. The wording seems to be near identical, but understand I did not validate the authenticity of the document. Given the circumstances, and we’re talking Jersey of course, you can decide what you think about that. 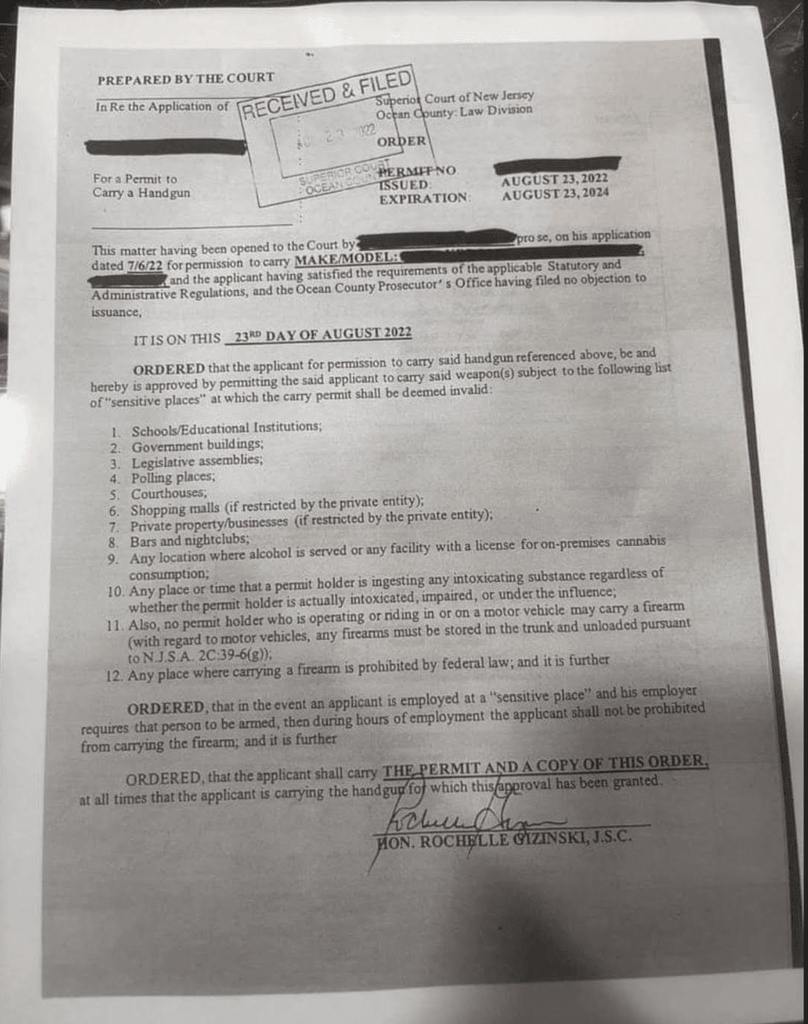 Is there a conspiracy going on between the judges of these counties? Is there a conspiracy between the executive branch and the judicial? The terms of where these so-called permit holders may or may not carry their firearms are similar to the terms and conditions that Governor Murphy wants to see put in place. Is this a coming attraction to what our lawmakers intend on passing? A neutered version of a carry law like New York has adopted? My cousin RICO would have something to say about all of this.

Did this judge just give New Jersey citizens a gift on purpose to be used to completely dismantle the permitting system as we know it? Things seem pretty arbitrary and capricious in the court order, and none of it is consistent with NYSRPA v. Bruen. Or was Francisco just told “This is what you get in Jersey when you try to buck the system.”

The suit is not over and done with though, as Francisco’s other injury claims include the challenging of more of the process, and there’s still another plaintiff involved. The fact that the judicial system is involved in an executive matter is being challenged. The stipulations and orders from the court are just ridiculous. Hopefully the courts will be removed from the equation. Francisco is clearly going to challenge the placement of restrictions on permits to carry.

Thanks are in order to Francisco and FPC for his work towards knocking down these awful laws.

If the Francisco case is not the one to help finish tearing down the walls of infringement in the Garden State on permits to carry firearms, there are several other cases still pending which hope to do the same. The Association of New Jersey Rifle and Pistol Clubs, along with the National Rifle Association and Coalition of New Jersey Firearms Owners, have a challenge to NJ’s statute in Mazahreh v. Platkin, and is considered the forerunner in the fight to dismantle NJ’s law as well as being favored to win. There’s also a Second Amendment Foundation and Firearms Policy Coalition supported case, Bennett v. Davis, and there’s a challenge brought on by a New Jersey Second Amendment historian, Jay Factor, who is also challenging New Jersey’s unconstitutional provisions of the law.

For those that are experiencing issues with permitting delays, extra steps to take, or other nonsense from issuing authorities and county courts, reach out to the Association of New Jersey Rifle and Pistol Clubs Permitting StrikeForce® and report your issue: [email protected]

For a video of Francisco explaining a portion of his journey, check it out in the embed below or by clicking HERE:

Here’s a link to the full order that Francisco received. You can see for yourself just how ridiculous these carry prohibitions are.