Our friends down under popping the bubbly over latest gun haul

The ridiculousness of Australia cannot be understated. No, I’m not talking about the bad ass blokes down there. The government and what the Australian people allowed to happen to their nation is the ridiculousness I’m talking about. Seeing reports out of Australia about big clampdowns on illegal arms brings up remembrance of seeing big cities in the Union patting themselves on the back over so-called gun buybacks (compensated confiscations). A recent report and social media post has the New South Wales police department doing the kangaroo bop, if there’s such a thing.

“Intelligence sharing across law enforcement is commonplace and we can very easily identify and target those responsible for the importation and manufacture of illicit firearms,” Det Supt Watson said.

“None of those arrested in NSW had the required permits or licenses to import or manufacture firearms or firearm parts, and pleading ignorance is not an excuse.

“Firearms compliance and regulation is a top priority for law enforcement because these are the deadly weapons of choice by criminal networks and present a significant threat to the community.

“With a number of people now bail refused and before the court following this year’s week of action, the message is simple; comply with our firearms legislation or face the consequences.”

And proud the New South Wales police should be after looking at the pictures they posted of their booty. 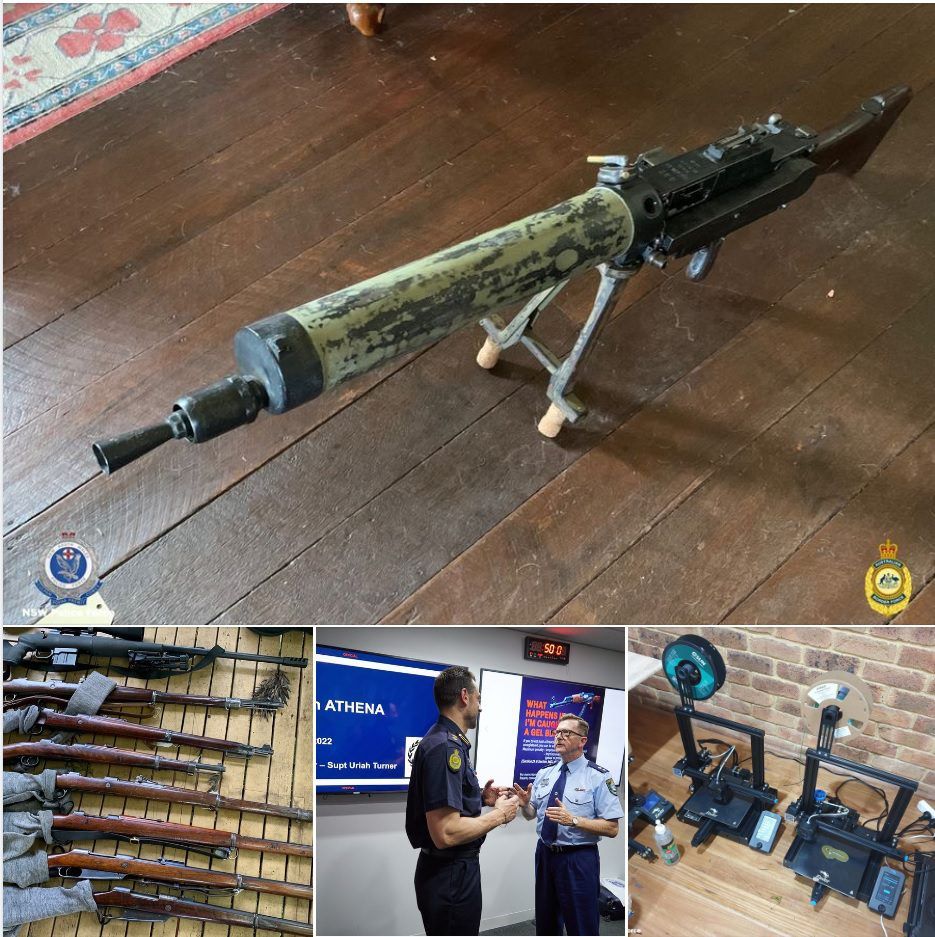 Here’s the thing, it’s difficult to be anything but cynical when looking at these types of social media posts or press releases because the Australian government did this. The banning of different arms and disarmament of the Australian people turned the citizens into subjects. If the footage of the way the police forces in Australia treated people in 2020 did not convince us otherwise, then nothing probably ever will.

A black market is able to proliferate simply because of the strict laws that there are. Just like the United States of America, I imagine most of the good people of Australia that are gun owners, are not criminals nor have any criminal intent. Having caused the strict regulation of arms, the Australian government enabled this market. Has prohibition era United States not taught us anything? How about the wonderfully failed war on drugs?

The press release heavily covered the amount of people in violation of the law for 3D printing of arms, or just being in possession of the files in order to make arms. The video footage of the large magnetic cranes lifting up firearms in Australia in the 90’s to be destroyed was a canary in the coalmine for lovers of liberty. The fact they’re now after digital information (much like pinko jurisdictions in the United States like New Jersey) should be another wake up call to the rest of the free world. Which I think pretty much the rest of the free world amounts to the United States and a few other “outlier” countries that allow for the civilian ownership of firearms for self-defense.

Police conducted search warrants at two premises and seized items including a laptop computer containing 3D printing blueprints for a Glock 17 pistol, a 3D printer and reels of 3D printing filament. A 40-year-old Sydney man was charged with possessing digital blue prints for manufacture of firearms, police pursuit – not stop – drive dangerously, not stop vehicle when directed to do so, and drive motor vehicle during disqualification period.

I’d give a big old hat tip and shout out to the social media group from Australia that I got this information from, and most of my stories from down under, but I fear for them greatly. If the nation is so hell bent on stopping people from possessing firearms, or simply the blueprints to make firearms, the peaceful citizens’ ability to openly discuss anything gun related is probably vulnerable to government shutdown. My heart goes out to the patriots down under!

This should be another one of the many wakeup calls to us over here in one of the colonies that broke free via a bloody revolution. We’re currently battling rogue agencies that are making up their own laws as they go along, as well as half a Congress that wants to see the most popular rifle in America banned. Ruminate on this as election season is coming to a close. We might be only a few seats away from having a safe majority, but we’re even less the amount of seats to becoming Australia.

China Is Not Happy That We Shot Down Their Spy Balloon
Townhall
Smearing DeSantis: How dishonest hacks and dumb people used an AP fact check to smear the governor
Twitchy
'Dark Brandon' Returns in Desperate Attempt to Gloss Over Joe Biden's Weakness
Redstate
Hot Air: No Global Warming for Eight Years
PJ Media