By Mom at Arms | Feb 25, 2021 6:30 PM ET
Share Tweet
Share
Tweet
In an era in which our personal freedoms are eroding more and more each day, leave it to the elitist “experts” at Harvard to tell us that they know what’s best. A new report was recently released by the university’s Carr Center for Human Rights Policy, and it doesn’t take a vivid imagination to guess what they suggest.
First, they make the argument that since it’s not the government‘s job to protect citizens from other citizens, that regulating guns is a viable solution:

“Responsibility for the protection of public safety is split between state governments and the federal government. The protection of “life, liberty and the pursuit of happiness” expressed in the Declaration of Independence is the primary responsibility of both governments. U.S. ratification of international human rights treaties, such as the International Covenant on the Elimination of All Forms of Racial Discrimination (ratified in 1994) and the International Covenant on Civil and Political Rights (ratified in 1992), extends “the right to life and bodily integrity”51 from international law into U.S. law. Federal and state government responsibility to protect citizens under these treaties could theoretically compel the U.S. to reduce gun violence through regulations on gun use and ownership.
However, these international protections have not been found to extend beyond protecting citizens from government violence to protecting citizens from private violence. For example, in Deshaney v. Winnebago Department of Social Services (1988),52 the Supreme Court found that the state government did not to have a responsibility to protect an individual from private violence under the Due Process Clause of the Fourteenth Amendment. In this case, 4-year-old Joshua Deshaney’s mother had sued the Winnebago Department of Social Services for failing to protect her son from his father’s abuse, thereby depriving him of physical safety. The Supreme Court, in a 6-3 ruling, found that, while the Due Process Clause “forbids the State itself to deprive individuals of life, liberty, and property without due process of law, its language cannot fairly be read to impose an affirmative obligation on the State to ensure that those interests do not come to harm through other means.”
The rejection of a citizen’s right to government protection from private violence has implications for the responsibility state governments have in ensuring the physical safety of their citizens. This in turn affects the government’s obligations to protect citizens from specific instances of gun violence. The Deshaney decision does not address whether the government can regulate guns proactively with the aim of preventing violence in general. In fact, there have been numerous successful laws regulating guns that have stood up to Second Amendment challenges.”

Second, they state that “opinions“ matter, and that preemption laws need to be wiped out. They also admit that “gun control needs to be reframed“. Ever wonder why gun control organizations are now using “gun safety“ as their new slogan? 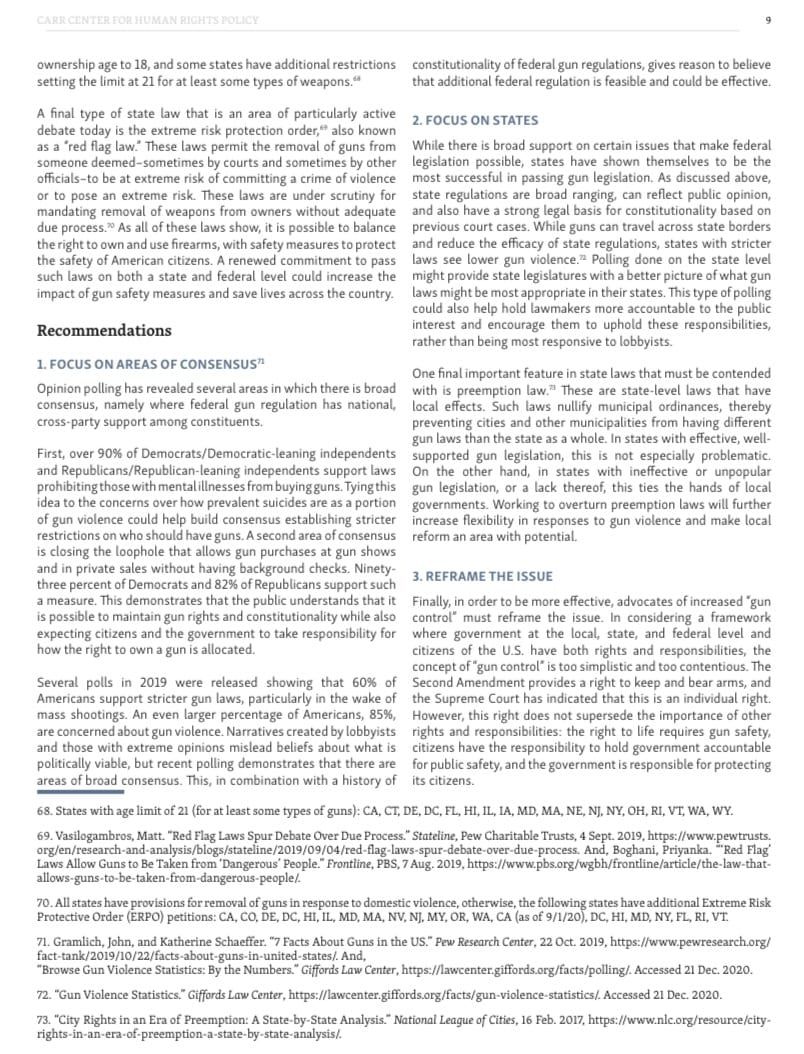 Regarding the preemption laws, that’s something Everytown For Gun Safety has been after for awhile. In fact, just days after the Pittsburgh Tree of Life synagogue shooting in 2018, Everytown was already recruiting Pittsburgh mayor Bill Peduto to play politics and help lead the way (FOIA courtesy of us, Mom-At-Arms. We love doing FOIA requests): 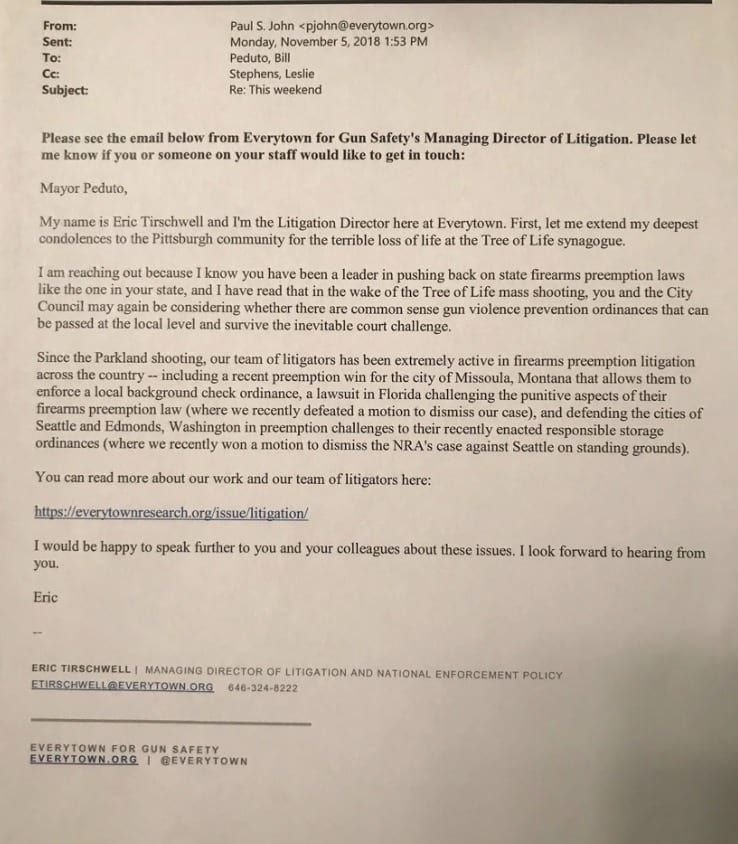 This next bit is fairly self-explanatory. In fact, it mirrors much of the draconian March For Our Lives “peace plan” (which is a sweet and fluffy term for civilian disarmament and erosion of the Second Amendment):

”In thinking about security, it is worth noting that many people carry guns for self-defense and see guns as a form of protection and security. Gun ownership and gun safety are 2 sides of the same coin. Without a constitutional amendment, guns cannot and should not be banned. However, gun ownership is not an unlimited right. This right must be balanced and contextualized. Framing this debate as being about gun safety rather than “taking away guns,” brings it closer to public concerns about reducing gun violence, while still allowing for responsible gun ownership. This means accepting a responsibility for safety and security along with maintaining the right to own and carry a gun.
How to Reimagine Rights and Responsibilities:
• Mandate Gun Regulation. The next U.S. administration should take the lead in calling for legislation that balances Second Amendment rights with the protection of public safety. Gun regulation can be formulated that protects both the constitutional right to bear arms and public safety.
• Ban Categories of Gun Sales and Restrict Gun Ownership. Federal and state legislation should ban the sale or use of assault weapons and high-capacity ammunition magazines; ban the purchase and ownership of guns by persons with mental illness, individuals under 21, and domestic partners with domestic violence misdemeanor convictions (the “boyfriend loophole”); and require gun owners to store guns in locked containers.
• Regulate the Sale and Manufacture of Guns. Federal and state legislation should require background checks for all gun sales, including at gun shows, online, and in private sales; mandate a 1 week waiting period for gun sale approval; require the Justice Department to publish the identities and locations of gun dealers who have sold guns that have been used in crimes; repeal federal law protecting gun dealers and manufacturers from liability in civil suits for death or injury resulting from the use of guns they sold or manufactured.
• Institute a Federal Gun Buyback Program. The federal government should establish a program to buy back guns from private owners in order to reduce the size of a national arsenal of 393 million guns now privately owned in U.S.
• Expand Research and Polling on Gun Violence. The federal government should support research and polling on gun violence in the U.S. in order to provide a scientific basis and public opinion support for establishing the balance of gun rights and public safety in gun regulation.”

So there you have it. Higher “education” seems to be lock-step with gun control organizations and Democrat politicians that support wiping out the 2nd amendment as a right. What do you expect though from a branch of the school (that did this report) that’s funded by none other than Michael Bloomberg and has Everytown staff working for it? 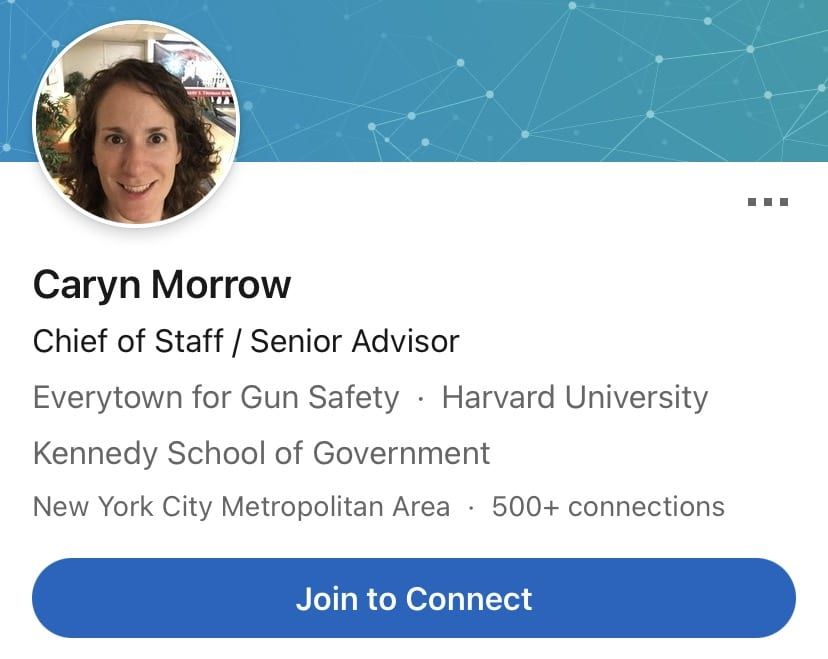 Nothing like buying your way into a university to use it for your own agenda…
Share
Tweet
Tags: VIDEO HARVARD EVERYTOWN FOR GUN SAFETY ANTI-GUN ACADEMICS HARVARD ANTI-GUN