Are Moms Demand Action and Tennessee state representative Larry Miller committing a government ethics breach, or just engaging in the “you scratch my back, I’ll scratch yours” kind of politics that drives good government types up the wall?

This is an amendment to Tennessee SB 765/HB 786, which allows Tennesseans to carry a handgun without a permit, as long as they’re within the legal limits to do so. 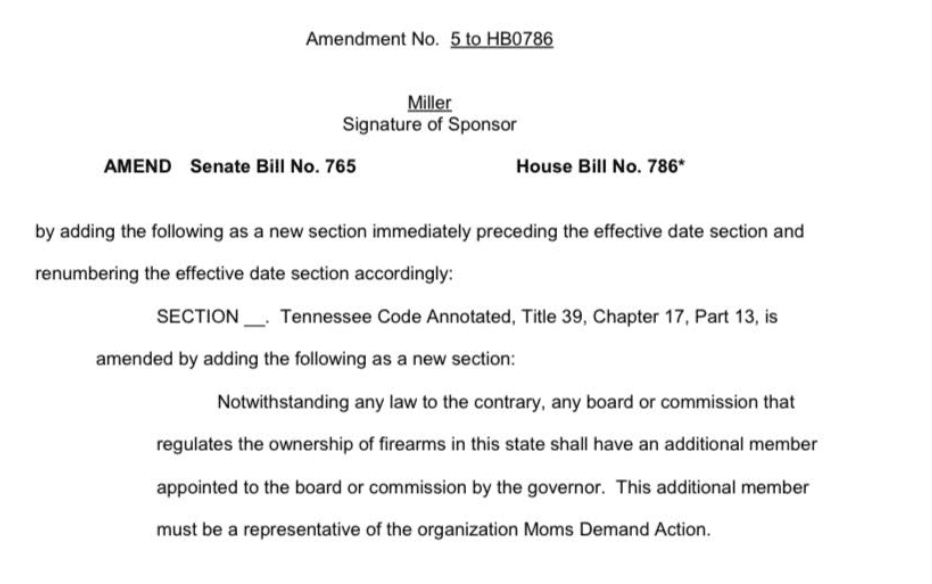 What Rep Larry Miller is trying to do with this amendment is demand that a Moms Demand Action for Gun Sense in America member, specifically, be appointed by the Governor of Tennessee to a board that’s main purpose is to regulate firearms. Considering that Moms Demand Action endorsed Rep. Larry Miller, it seems he‘s returning the favor and creating a government position just for them. Since he singled out the very organization that endorsed him, and by using the word “must” to emphasize their importance within the bill, he may be violating Tennessee legislator ethics rules (Article 2 section 1 part 1 and 2).

SECTION 1. (a) In order to maintain the integrity and reputation of the House of Representatives, the following conduct is a violation of this Ethics Code:
(1) Actions that destroy a representative’s independence of judgment as a legislator;
(2) Actions that are an abuse of the representative’s official position, including, but not limited to, placing undue influence upon any state department, agency, court or governmental subdivision;

Corruption has been an issue recently in Tennessee, and Miller is no exception, as he’s tied into it:

The newest evidence features more highlights of John Ford and Chris Newton. But it also features a chat between an undercover FBI agent and a bagman about money given to State Representative Larry Miller.
Miller has long said he only took $1000, a legal campaign contribution. But he – along with a handful of others – is feeling the side effects of the Tennessee Waltz. They are collateral damage in a trial that promises to tank the public’s trust in elected officials.

While it looks like Moms Demand Action and its parent organization Everytown haven’t made any donations to Miller in recent years, the groups are largely spending money supporting candidates through their own PAC, so they don’t have to disclose the source of their donors. Not that it matters, since Everytown founder and gun control sugar daddy Michael Bloomberg is clearly the guy putting tens of millions of dollars into their account.
Still, even if no money has changed hands, it would be interesting to see what Miller has discussed with Everytown/Moms Demand behind closed doors. One thing is for sure, and that’s that Everytown’s politicians are helping them out by trying to get them involved in governmental decision-making to fight against our civil rights protected by the Second Amendment. Maybe the Tennessee House Ethics Committee could subpoena documents and communications just to be sure he wasn’t doing anything naughty to help his buddies out.

After all, if a Republican endorsed by the NRA had offered an amendment specifically calling for an NRA representative to be on that very same board, not only would we have seen headlines screaming about the “gun lobby setting government policy,” Democrats (maybe even Rep. Miller himself) would have been crying for an ethics investigation. If this is just a case of Miller pandering to the anti-gun crowd, fine, but someone with more power and authority than us should be looking into this.

Feminist Writer Finally Says the Quiet Part Out Loud Regarding Abortion
Townhall
Think about it: People are 'pro-life' but there's no baby formula on the shelves
Twitchy
Joe Biden's Reported Position on Court-Packing and Filibuster Drives Left Into a Frenzy
Redstate
Don't like the SCOTUS Decisions this Week? Blame a Greedy Liberal
PJ Media