Roughly Half of Parents Want Armed Security in Schools

According to a recently released Pew Research poll, roughly half of U.S. parents want armed police or security in their child’s school.  Forty nine percent (49%) of parents say having police officers or armed security stationed in schools would be a very or extremely effective approach for preventing school shootings, with another third (33%) of parents also acknowledging the effectiveness of armed security. This polling comes on the heels of reporting here at Bearing Arms about renewed interest in armed school security, even in blue states.

Parents remain divided on what they believe to be the most effective approach to preventing school shootings. Fewer parents believe that other approaches, such as allowing teachers and school administrators to carry guns in school, would be effective in preventing school shootings. Only about a quarter of parents (24%)  say this would be a very or extremely effective approach, with a quarter (25%) saying it would be somewhat effective, while half say it would be not too or not at all effective. 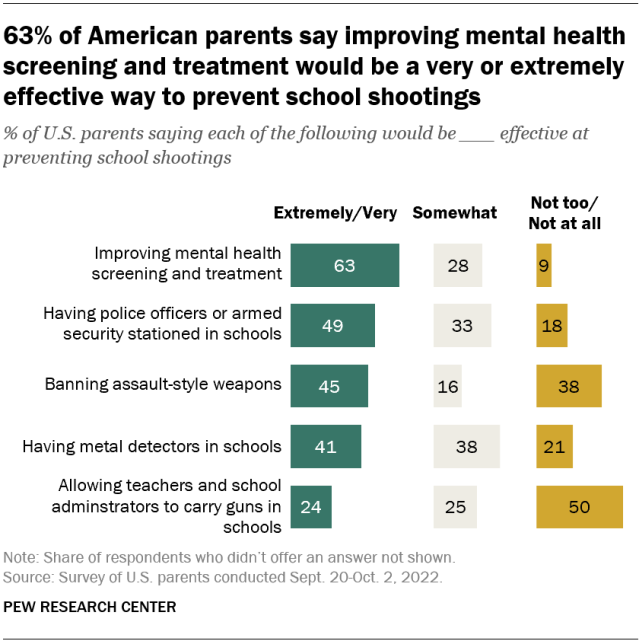 Efforts at early identification of threats and early intervention are favored by school safety experts, so parents views are in line with many of those experts, although the experts like parents remain divided on the issue of armed security in schools.  States such as Florida have enacted statutes requiring armed security or law enforcement presence on school campuses as a measure to reduce the likelihood that a school will become a target and to reduce response times.

As one would expect, support for each option varies by political party.

Reflecting the broader debate over gun policy in the United States, there are significant differences by party when parents are asked about approaches to preventing school shootings. For example, a majority of Republican parents with at least one child under 18 (61%) say having police officers or armed security stationed in schools would be a very or extremely effective preventative tool, whereas only 38% of Democratic parents say the same.

When it comes to allowing teachers and school administrators to carry guns in school, 41% of Republican parents say this would be a very or extremely effective approach, compared with 11% of Democratic parents.

Majorities of parents in both parties say that improving mental health screening and treatment would be a very or extremely effective way to prevent school shootings.

The debate over how to prevent school shootings is sure to continue, but it is clear that more and more parents are deeply concerned about the safety of their children while they are at school.  For parents that would are worried about the safety of their child at school, it is important to get involved in local school board elections and ensure that candidate know how important school safety is for you.