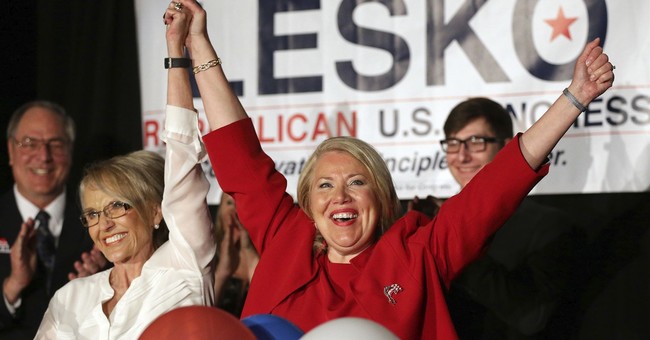 When it comes to the Violence Against Women Act, Democrats are painting all opposition to the anti-gun proposals contained within as an effort to empower domestic abusers. It’s a common tactic, one where they try to make a position so untenable no one will try to hold it. After all, who supports domestic abusers?

But Congresswoman Debbie Lesko is an actual survivor of domestic violence. To say she would support such people would be a grave insult. Yet she’s opposing the Violence Against Women Act, in part because of those anti-gun provisions.

The Democrat version of the Violence Against Women Act takes away Second Amendment rights from people without due process.

When I got an order of protection against my ex-husband many years ago, I went to a justice of the peace and wrote down why I was threatened by him. The justice of the peace gave me an order of protection. My ex-husband was not there. But under this bill, it would have taken away his gun rights. In the case of my ex-husband, he really should have had his gun rights taken away because he was a threat. However, he did not have the ability of due process to defend himself. This is just wrong.

Please don’t be confused by the title of this bill, Violence Against Women Act.

This is nothing but a political strategy by the Democrat Party to put in things in this bill that aren’t bipartisan, that are totally partisan, knowing that Republicans will vote no so that the Democrats can say Republicans are against women.

Take a look around at the headlines surrounding the National Rifle Association’s opposition to the bill. This one yesterday from the Detroit News is pretty indicative of the coverage when it says, “NRA fights Dingell measure to stop domestic abusers from getting guns.”

They’re trying to convey the idea that the NRA wants to empower domestic abusers.

What they’re leaving out of those headlines is that most domestic abusers are already barred from owning guns. What the bill seeks to do is expand the definition to more and more people such as those who commit assault in a relationship other than marriage. In other words, someone who is dating a woman and grabs her arm to try and stop her from storming off during an argument could well be stripped of their gun rights for life under this bill.

While that act constitutes assault, and I have no problem with that, someone who does such a thing doesn’t constitute some grave threat to anyone. The same holds true for the clueless guy trying to woo a woman.

Lesko’s example of stripping someone’s gun rights without due process is yet another concern.

Let’s be clear; no one would strip someone’s right to speak freely or right to vote out of one person’s claim that they’re dangerous, so why would we treat the Second Amendment differently? It’s been said that gun rights are second-class rights in many people’s minds, and that’s an incredibly accurate summation of what we see, especially here.

It needs to stop.