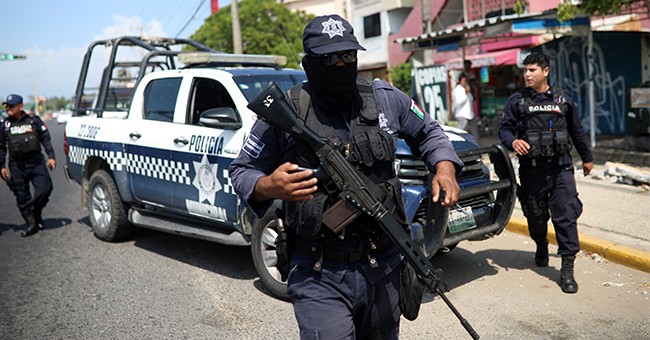 The last thing the United States should want to see is violence in a neighboring nation like Mexico. After all, far too often, that violence doesn’t stay in that country and could easily find its way up across the border and plague American cities.

However, Mexico is a violent place. Incredibly violent. The Mexican cartels hold dominion over entire swaths of land. Anti-cartel militias have risen up to try and fight back when the police either can’t or won’t.

In fact, it’s easy to look down on Mexican police as being at least as big a part of the problem as the cartels themselves. Yet after events Monday in Mexico, we may want to rethink that assessment just a bit.

At least 13 police officers were killed early Monday in the state of Michoacan in western Mexico, the latest in a series of high-casualty attacks by armed criminal groups across the country.

The state police were enforcing a judicial order in the small town of El Aguaje not long after daybreak when they were ambushed, security officials said.

Local media reported that the attack was waged from an armed convoy of 20 vehicles.

Photographs of the aftermath of the attack show a blue-and-white police vehicle in flames. In audio recordings published on a local media website, officers can be heard begging for backup over police scanners.

“Help, man,” one officer pleaded. “They knocked almost all of us down.”

Officials have not said who they believe carried out the attacks or cited a motive, but local journalists reported that the assailants were affiliated with the Jalisco New Generation Cartel and had left signed messages at the crime scene warning police not to collaborate with rival organizations.

Now, I’ll be the first to acknowledge that there are some corrupt cops down in Mexico. A lot of them. Yet there are now a lot of dead police officers there as well.

It should be noted that Mexico acknowledges the right to keep and bear arms, but there’s precisely one legal gun store in the entire country and citizens have to go through mountains of paperwork just to set foot inside the store. Gun rights are mostly theoretical in Mexico.

Without lawfully armed citizens, criminals gangs like these cartels hold far more power than they should, especially when so many police officers are bribable.

Yes, there are militias that have armed themselves to respond, but they’ve had to do so illegally.

Plus, the problem is that now they’re so big and powerful that the cartels can hit entire columns of police officers with relative impunity.

I can’t help but imagine what would happen in a society where the right to keep and bear arms was actually treated as a right and not a privilege should some gang decide to get ambitious as the cartels have. I somehow don’t think they’d get much of a foothold in rural Kansas or most of Alabama.