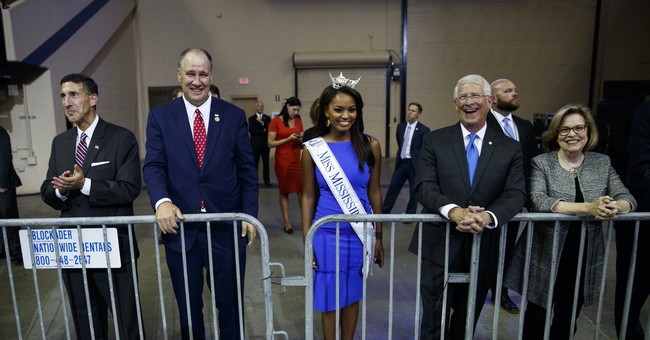 Pageant queens are typically known for making rather vapid statements. The long-held joke that they all want world peace actually comes from a real place, after all.

Well, in recent years, there’s been less and less of that. Judges have apparently stopped looking for inoffensive statements and want something real. That’s ultimately a good thing, so long as they don’t play favorites with the messaging (which they will, I’m sure). However, sometimes, someone needs to think things through and make sure the messages delivered aren’t at odds with one another.

The problem is that this morning, her mixed messages are being celebrated.

Miss USA 2020 Asya Branch made history Monday night, becoming the first contestant from Mississippi to win the crown, after she had already made history as the first-ever Black Miss Mississippi. But before winning the Miss USA crown, live on FYI from Elvis Presley’s Graceland in Memphis, Tennessee, Branch won the hearts of Americans with a statement on gun reform that showed understanding from both sides of the debate.

“As someone who grew up in a home with guns, I learned at an early age how to load, how to fire, and gun safety, and I think that education should be available to everyone,” Branch said. “We should require people to pass training and safety courses before they’re allowed to purchase a gun, and before receiving a permit. I think it’s important that we not ban guns, because obviously people will find a way to get what they want anyways, but I think it’s our Second Amendment right, and we just need more safety surrounding that.”

Later, she was blasted for having performed at a Trump rally and put out a call for unity.

The problem is, if you take a position like the one above, you’ve already made unity impossible. These are civil liberties we’re talking about when we mention gun rights. We don’t make people take special training classes before opening their big mouths on politics. We don’t require people to go through special classes before going to church. Nor do we make people undergo special training to work in the news media (no, journalism school isn’t actually required).

These are all civil liberties, protected by the United States Constitution just like the Second Amendment.

When Supreme Court Justice Clarence Thomas referred to the Second Amendment as a second-class right, this is precisely the insanity he’s talking about. No one would seriously consider putting that kind of a restriction on someone’s First Amendment rights, but why would they do it for the Second Amendment? The answer is that they don’t see those rights as real rights.

That’s a big problem for me.

No, I don’t actually believe that Miss USA has any actual power to create the policies she’s espousing. At least, she doesn’t yet. She’s young still, so who knows where she’ll end up. Right now, though, she can’t. She’s a pageant queen who will spend a year being shown off and then fade into obscurity like all the other past Miss USA winners.

The problem is that she is saying something other people believe, and that nonsense needs to be countered with every waking breath because if we don’t, it’s what we’ll end up with.

Trump’s EO 13977 – How Will The New Administration Handle This?