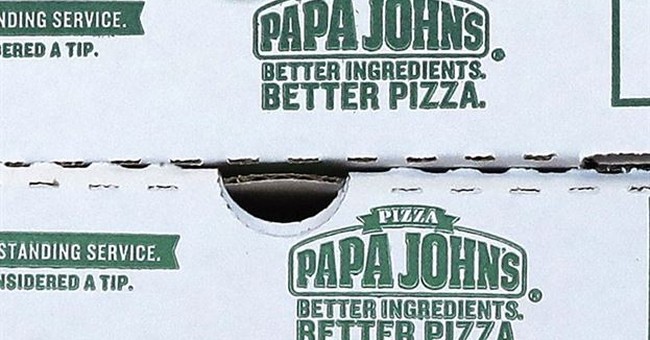 When you’re an armed citizen, you tend to run a lot of scenarios through your head. What would you do if X happened? How would you respond if Y took place right now?

One of the more common scenarios many run through is what would they do if someone walked into their place of employment with a gun and tried to rob the place. A lot of us have thought about it and those of us who haven’t, it’s because we work someplace where there’s no point in robbing it.

For one Georgia armed citizen working at a Macon, GA Papa John’s, that nightmare scenario became an unfortunate reality.

It was reported that workers there asked 24-year-old Corey Stewart if he had an order when he walked inside the store.

He said no. That’s when the release says Stewart walked up to the employees and threatened to shoot the store up if they didn’t give him money.

When the employees didn’t give him money, Stewart went to the restroom.

An employee got their handgun and held Stewart at gunpoint until deputies arrived.

OK, there’s a fair bit to unpack here, so let’s get to it.

First, who the hell goes to the bathroom halfway through a robbery? Didn’t your mama teach you to go before you leave the house? I mean, you’d think a competent criminal would want to control the whole facility so as to prevent anyone from calling the police or…I don’t know…getting a freaking gun.

Still, without a firearm, it could have gotten ugly. Stewart may well have started shooting soon if he wasn’t given the cash. He might have been in that bathroom psyching himself up to take human life. We don’t know, and thankfully, we never will.

Instead, we have a bad guy going to jail and a good guy going home at the end of the night.

That’s precisely why the Second Amendment is so important. While our Founding Fathers enshrined our right to keep and bear arms to protect against a potentially tyrannical shift in our government–something we might see all too soon–it also matters that we’re also able to defend ourselves against the tyranny of the thug.

Stewart walked into that store with the intention of becoming a micro-tyrant. He wanted people to give him money out of fear. They didn’t, and they survived that decision because one of the employees was armed. That employee illustrated exactly why our Second Amendment rights are so absolutely vital.

For most of us, we may never see tyranny of any type face-to-face. That’s a good thing. Yet if we do, it’s a bad time to decide then that we need to step up and get the tools to defend our liberty. That time will have already passed.

To the employee who got his or her gun, all I can say is good on you. There are people who may well be alive today because you did.

Number Of Guns Found By TSA Spiked In 2020