A man with a shovel threatening you is a pretty scary thing for most people. I’d imagine it would be especially so for a woman, considering the muscle mass difference between the average man and the average woman. It’s often enough that a man could kill a woman with his bare hands. Give him a shovel to use as a weapon, and it’s even worse.

Unless you’re the kind of Texan woman who understands that firearms are the great equalizers.

Laura Williams says she grabbed her pistol and held an intruder at bay while her teenage daughter called 911 after the man kicked in the front door of her home on U.S. Highway 84 just outside of Mexia and charged her with a shovel.

“I aimed it at him and said if you take one more step I’ll kill you,” she said Friday.

The man ran, but Limestone County deputies later arrested him.

Allen Tompkins, 47, was charged with burglary of a habitation, but additional charges are possible.

The incident happened Tuesday and Williams’ daughter, Hannah, 17, hasn’t been quite the same since.

“I felt really scared and my adrenaline was pumping so I don’t really remember a lot of it, but I’m not sleeping well at all.”

Laura Williams was awakened Tuesday morning by a ringing doorbell.

“I went to the door and just kind of opened it and there was an older man standing at my front door with a shovel and he asked for a lady’s name and I said ‘there’s no one here by that name I’m sorry, you’re at the wrong house, she doesn’t live here,’” Williams said.

However, the man didn’t leave. Williams observed him outside with the shovel, so she got her daughter and her dogs and headed to her bedroom, where the family keeps their guns.

That’s when Tompkins allegedly began kicking the door down. She grabbed a revolver and headed out of the bedroom while her daughter dialed 9-1-1. There, Williams reportedly met Tompkins who had a shovel on his shoulder and was heading straight for them.

In the match of shovel vs. revolver, guess who wins.

Let’s be clear here, there’s no reason to believe that Tompkins intended to do anything but hurt Williams and her daughter. No reason at all. He already knew she was home because he’d made contact. He knew the house was occupied, yet he still (allegedly) kicked the door in. Anyone who does that means to hurt whoever is in the house.

Williams was fortunate that she had a gun and was able to get to it quickly. If not, we might have been reading a far, far different story, one no one would really want to read.

Folks, guns save lives. The anti-gunners would love to tell you otherwise, but time and time again, we see that they do. Even the CDC found that there are roughly 2.5 million defensive gun uses each year.

But for Williams, the statistics are meaningless, I’m sure. She had a gun when she needed it. That’s all that really matters. 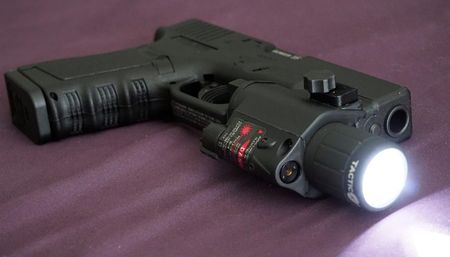