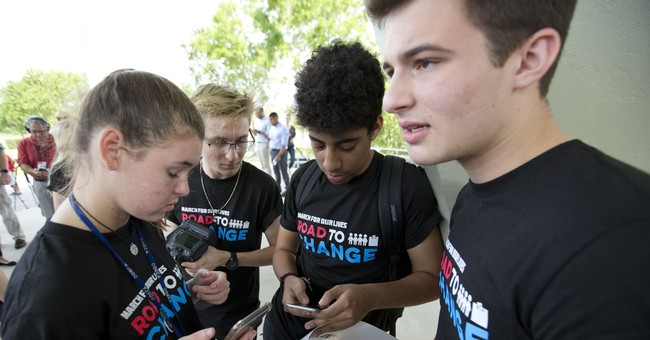 As the Parkland kids tour the country telling anti-gunners what they want to hear and accomplishing absolutely nothing of substance, they are still being hailed as some kind of heroes. Since this comes from people who try not just to devalue actual heroes but also defang future ones, this is meaningless.

Still, the kids travel on the lamest senior trip in recorded history to try and tell other people how to live their lives.

One stop they won’t be making, it seems, is Salt Lake City, Utah. There, the movie theater that was going to host them has canceled.

A movie theater in Utah rescinded its decision to host survivors of the Parkland shooting in the middle of a nationwide tour because of concerns that the town hall they planned to hold could spark a “contentious situation” amid an ongoing back-and-forth with a gun rights group and March for Our Lives activists.

On Wednesday, three days before the planned event, Larry H. Miller Megaplex Theatres said in a statement that it had decided to cancel the teens’ gun reform rally, saying that the theater had not been aware of the “full context” of the tour.

“When this event was initially booked, the full context wasn’t fully understood and now it appears to be escalating into a potentially contentious situation where additional security will be required,” the company said in a statement.

A group of students from Marjory Stoneman Douglas High School were slated to stop in Salt Lake City this weekend as part of their “Road to Change” bus tour. Created by March for Our Lives, the gun control advocacy organization born in the wake of the Parkland shooting on February 14, the tour’s events aim to register young voters and “stand up to the National Rifle Association.”

It appears to be the first time a Road to Change event was canceled.

The theater group backtracked on its plans to host the teens one day after the Salt Lake Tribune published a story about a one Utah gun-rights organization that has been showing up at March for Our Lives events in a black armored vehicle with a massive gun on top, encouraging Second Amendment supporters to join them, including pushing people to attend the Salt Lake City town hall.

So it seems the Utah Gun Exchange is really making a difference.

The truth of the matter is that these kids are calling for a direct attack on our civil rights, so they should be confronted at every opportunity. They should be called down for their lies, misrepresentations, and anything else they spew. If they want to play with the big boys, they get to play by big boy and big girl rules. That means being called on their BS.

For the theater, I understand where they’re coming from. They’re expecting everything to be nice and peaceful, but now it seems there may be opposition there, and that’s more than they want to handle with their current setup. Of course, with such a contentious issue and in a fairly pro-gun state like Utah, I’m baffled as to how they didn’t expect a “contentious situation” in the first place.