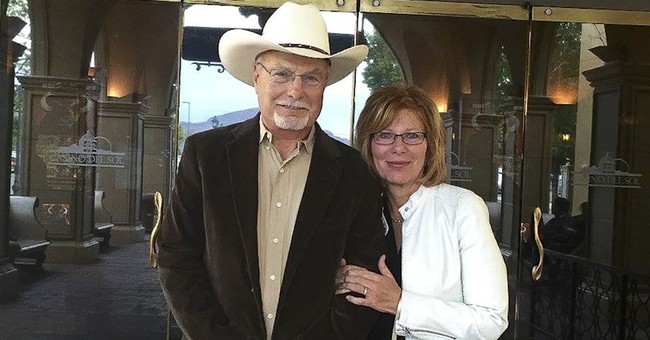 Arizona state Senate candidate Bobby Wilson understands the importance of the Second Amendment more than most. He’s one of the 2.5 million people every year who has used a gun in self-defense. Only, instead of just displaying a gun and scaring off the attacker like most, he had to fire his weapon.

The fact that his attacker was his mother makes the whole story even more sensational.

Wilson recently brought this up and has shocked the gun control community in Arizona.

Bobby Wilson, who is running to represent a southern district, told the Associated Press that he’s not trying to hide anything. He says his mother was insane and shot at him with a rifle when he was in bed in their Oklahoma farmhouse one night in 1963. He then shot and killed her. Wilson’s sister also died that night, and the house caught on fire.

“I’m lucky to be alive, twice over,” Wilson said.

Wilson wrote about these events in his 2010 book, “Bobby’s Trials,” and mentions them on his website biography. But they caught public interest when he appeared at a Moms Demand Action forum in Tucson this month. Wilson told the crowd he was “living proof” that the only one who can stop someone trying to harm somebody is a “good guy with a gun.”

Rep. Daniel Hernandez, a Democrat who represents the district Wilson is running in, was at the forum. He said Gabrielle Giffords, the former congresswoman who was shot in Tucson in 2011, and other gun violence survivors were in the audience. Many were shocked, he said.

Hernandez — who was at the scene when Giffords was shot — said Wilson also brought up the Giffords shooting, saying that she should’ve had security.

“I’ve never ever heard someone be so aggressive in that view, and also to drag Gabby into it, I thought, was so distasteful and so disgusting,” he said.

I’m trying to figure out what’s so distasteful and disgusting about it. Giffords has put herself in the front line on the gun control debate because of her status as a survivor. It’s certainly her right to do so, but that also means she’s a legitimate target for criticism. You can’t shield yourself with a survivor status while targeting a fundamental right. You get to pick one. You can’t have both.

However, that wasn’t the only stupid displayed.

Jacob Martinez is one of the organizers for March For Our Lives AZ. His take away from Wilson’s story is that it’s evidence in part of the need to lock guns up in the home.

Wilson’s mother was an adult in the household. It’s highly unlikely she wouldn’t have been able to gain access to the guns.

On the other hand, Wilson would have been disarmed at a time when he needed a weapon in self-defense. In other words, Martinez’s suggestion would have played out with the mother still having a gun at hand and Wilson dead. Anyone with half a brain can see that.

But gun grabbers, not so much.

The fact is that if Giffords has moral authority because a maniac shot her, then Wilson has that same moral authority as a survivor of gun violence. The difference is, Wilson was able to fight back, and the outcome was very, very different.

Frankly, I’d rather we have enough armed citizens, so we have more stories like Bobby Wilson’s and fewer like Gabby Giffords’.