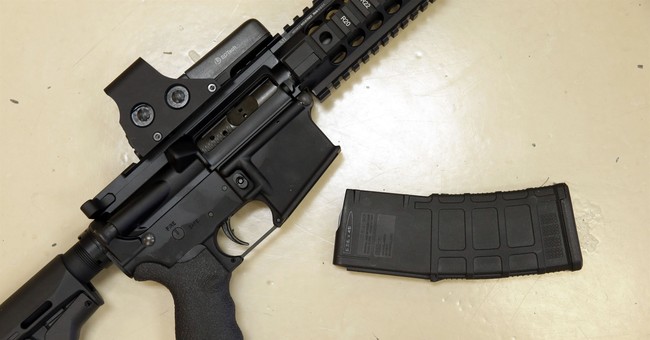 California’s new assault weapon registration was supposed to help keep the state safe. Apparently, they think that knowing where all the guns are will somehow make it impossible for someone who isn’t registered to do something bad, which is a load of wishful thinking.

However, I’ve always believed that most people will be law abiding citizens right up until the law goes too far. That’s especially true when you’re talking about something that’s a fundamental right like firearm ownership. You can push and push, but at some point, a lot of people will up their middle finger.

The Firearms Policy Coalition (FPC) said the likely registration rate of “bullet-button assault weapons” was only about 3 percent of the total number of firearms in California that fall under the state’s latest expansion of its “assault weapons” ban. State documents obtained by the group through freedom of information requests show the Department of Justice approved 6,213 individuals to register 12,519 firearms under the new law by the end of June. It rejected a further 1,373 registration attempts. As of June 30, 2018, 52,443 applications for registration were pending.

The 66,335 applications for registration pale in comparison, FPC said, to the number of firearms sold between January 2000 and December 2017, which the state said must be registered by June 30, 2018. Using data on gun sales from state records and the National Shooting Sports Foundation, the group estimated there were 1.3 million firearms sold in California that would fall under the registration requirements. They estimated an additional half-million home-built firearms fall in the same category.

That would put the number of attempted registrations at about 3.6 percent of the total number of firearms required to be registered.

“In 2016, I predicted ‘mass noncompliance with these laws,’ and that seems to be what happened,” Brandon Combs, FPC president, told the Free Beacon. “I think there are a number of reasons people didn’t register as many firearms as many originally expected. First, the legislature refused to require DOJ to do any outreach or education campaigns to inform gun owners about the law changes. In spite of our many requests for outreach during the legislative cycle for SB 880 and AB 1135 in 2016 and showing that historically a major law change like this came with an outreach program, they just refused to add outreach to the bills. Because of that, many gun owners probably have no idea that the laws changed and that they could be in serious legal jeopardy.”

Combs also cited the arrest of a prominent rancher after he attempted to comply with the law as a motivator for many to refuse to register their weapons. After all, why try to comply when you may well find yourself arrested and forced to defend yourself in a court of law?

However, even without that arrest, I suspect the vast majority who are refusing to register their weapons would still have refused. Far too often, we see the problems with gun registration. It never seems to work out well for the law-abiding gun owner, and it never has any impact on criminals, their access to guns, or public safety. In other words, it’s nothing more than a way to put the screws to gun owners for no reason other than the fact that they’re gun owners.

Why would they comply?

Now, I won’t recommend people faced with a similar situation not comply with the law. I won’t do it for obvious reasons. What I will do, however, is state that I understand where they’re coming from.

Well, for some it’s enough. They’re done. If they’re going to be treated like criminals, they might as well get some of the benefits of the title, like not having the state know everything about what they own. I can’t say that I blame them.